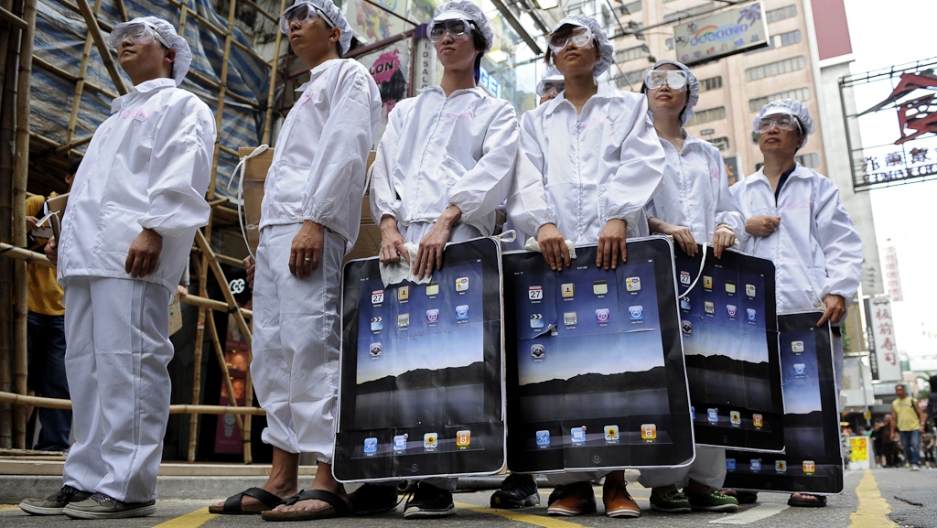 BEIJING, China — Steve Jobs leaves an intensely complicated legacy in China, with legions of devoted Apple fans. But there are also scores of workers who were churned through the gadget production machine, some seriously injured, while making those products.

While news of Jobs’ passing led to spontaneous outpourings of grief in several spots in China where the emergent middle class paid tribute to his innovations, those who worked in the mostly Taiwanese-owned mega-factories that made Apple products for years were more circumspect.

Jobs himself never responded to their requests for assistance, and their plight was only touched upon in general last year in Apple’s annual report on supplier compliance.

Apple: United States of Apple: Is It a Cult?

Jobs’ death hit home especially hard for Jia Jingchuan, who was poisoned on the job while making iPhones at an Apple component factory in Suzhou two years ago. Earlier this year, after failing on his own to get help when his medical condition flared up, Jia made a personal appeal to Jobs, writing a long letter to the head of Apple asking for assistance. In the many months after, Jia never heard back.

On Thursday, Jia said he held no ill will toward Jobs, but had complicated feelings over his own ordeal and the Apple co-founder's health problems and death.

“I feel sorry about Jobs' death,” said Jia. “His company made products to make people's lives convenient and pushed the industry forward.”

Jia and hundreds of others of workers at an iPhone and Apple touchscreen component maker in Suzhou fell ill in the summer of 2009 when the factory swapped in an illegal chemical in the production process to shave time off of manufacturing and meet swelling demand.

From China: Silicon Sweatshops: An illness in Suzhou

The chemical n-hexane used in the Taiwanese-owned Wintek factory caused dozens to faint, fall ill and complain of headaches and other mild symptoms. But many workers were hit harder, suffering nerve damage in their hands and feet from exposure to the chemical, the use of which is regulated in China. The lasting impact of their exposure to the toxin remains unknown, and Apple has repeatedly ignored requests for comment on the situation. They did mention the case in their 2010 corporate supplier report, but said the matter had been solved.

Former workers, meanwhile, say they’re still waiting for some form of compensation for their illnesses and for word on what they can expect health-wise in the future. Prolonged exposure to n-hexane is known to cause problems with fertility and other issues.

Even though Jobs never contacted them or offered help, with Jobs gone, several former iPhone workers said they feel even more uncertain about where to turn.

Guo Ruiqiang is another former Wintek Suzhou laborer who claims he fell ill making iPhones. He’s now back on the family farm, having trouble finding good work and uncertain about his future.

“I care more about my health than Jobs' passing away,” said Guo. “With Jobs dead, I feel more lost than before. I really don't know what to do.”

The Hong Kong-based Students and Scholars Against Corporate Misbehavoir, which made a regular habit of exposing Apple-related labor abuses in China, still has harsh words for the company in the wake of Job’s death.

“In Steve Jobs’ tenure, rampant labor rights violations at its suppliers in China were reported, including the poisoning cases at Wintek which caused the nerve damage of 137 workers, the explosion at Foxconn which killed 3 workers and injured 15," the group said in a statement.

In addition to the sick workers and well-publicized spate of suicides at Foxconn, another Apple component maker in Shenzhen, and deadly explosions at the iPad supplier factory in Chengdu, Apple faced recent criticism in China for its environmental record. Several environmental groups took the company to task in a major report for working with companies known to have created major pollution problems in several different parts of the country.

And still, users of Apple’s products in China reacted much like consumers in the United States, with glowing praise and eulogies. The sick former worker Jia understands.

“Previously I actually felt wonderful to work for Apple, who promised to be green and socially responsible,” Jia said. “But they're just flaunting the bright side. They don't show respect for the laborers. No apology and no responsibility for us.”

He continued: “I feel more uncertain now Jobs is dead. I had some hope but I'm just too insignificant compared with Apple, Inc.”