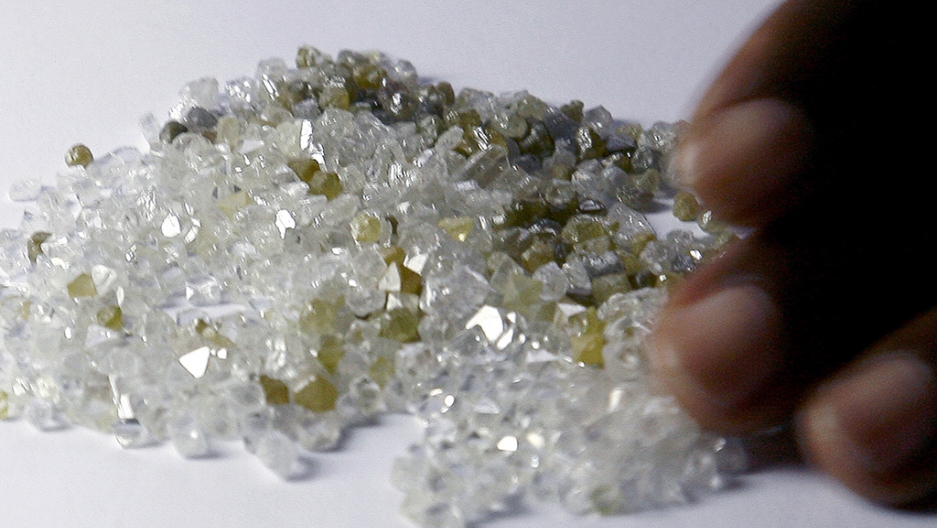 The film didn’t paint a pretty picture. But it did intensify the spotlight on the issue, which itself was reflective of real-world events like the Kimberley Process in 2000 — which drew governments and industry together in an effort to stem the savage trade.

But here we are a decade later and the buzz has died down. There is still talk about blood diamonds, but the multi-billion dollar global trade has hardly come to a grinding halt.

GlobalPost takes a look at how the ongoing ugliness ties the world together — from the raw diamond mines in Zimbabwe to India, where little-known middlemen polish the stones ‘til they shine on the shelf in Antwerp, hidden from view unless you know who to ask.

As long as diamonds are forever, blood diamonds will be too.

MUTARE, Zimbabwe — Miners illegally digging for diamonds in Zimbabwe’s Marange area regularly have two things to show for their work — a few stones and some dog bites.

Nearly 200 miles away in the capital Harare, officials in President Robert Mugabe's government publicly complain that they can’t improve public services because exports of the Marange diamonds are restricted by the international diamond regulator, the Kimberley Process. But behind closed doors the same officials sell diamonds to the Chinese in exchange for military support, according to diamond trading experts.

Zimbabwe's Marange Valley, on the eastern border with Mozambique, is home to rich alluvial diamond deposits that have an estimated worth of up to $800 billion and could be viable for the next 80 years. The diamond deposits were discovered in 2006, and the charges of human rights abuses started in 2008, when the Mugabe government seized control of the mining areas.

The Kimberley Process restrictions were imposed on Zimbabwe 2009 after reports of brutal violence and human rights abuses by the Zimbabwean government security forces, including the killing of at least 200 civilians when the military took control of the diamond fields. Since then, there have been continuing reports of Zimbabwe state agents committing human rights abuses — including rape, child labor and mass killings.

Tales abound of how security guards at the commercial mines and soldiers “guarding” land yet to be granted to commercial miners still brutalize illegal miners and community members, at times killing them or leaving them for dead.

In Zimbabwe, where unemployment is estimated at over 90 percent, the specter of rich pickings still drives dozens of men, women and children to defy the dangers of illegal mining in Marange.

Chenjerai, the unemployed father of two, is one of those who still frequent the Marange diamond fields. He has scars from dog bites and gun butt assaults all over his body.

“The guards caught the three of us inside Mbada Diamonds’ fence and set dogs on us. We were mauled until the white manager offered to drive us to Mutare Hospital,” Chenjerai told GlobalPost of his latest encounter a month ago.

His tone shows neither emotion nor hard feelings. To him, it’s a tale all too common.

“We didn’t make it to the hospital because police at a roadblock ordered the white man to drop us as they wanted to charge us. Instead of charging us, they began demanding cash and diamonds,” said Chenjerai, who says he is a trained bookkeeper.

A senior cop, Chief Superintendent Joseph Chani, is under official investigation for allegedly beating to death an illegal miner handed to him by security guards at a commercial mine.

Workers for some of the commercial firms are not spared harsh conditions. Trade unionists say workers at Anjin mine are regularly harassed and work under inhumane conditions. Anjin is a 50-50 joint venture between the Chinese government and the Zimbabwe army.

Yet, despite the allegations of rights violations, diamonds from Marange are a hot commodity.

“We have China and India. They can’t wait for this KP [Kimberley Process] nonsense to end. In fact, Zimbabwe views the KP’s actions as human rights violation,” said Mpofu, a Mugabe loyalist who has repeatedly been forced to defend accusations that he acquired massive wealth and went on a property buying spree after the diamond rush.

Mpofu said a deal to sell $100 million a month to India’s Surat Diamond Association is stalled because of Kimberley Process differences over Zimbabwe.

India in August this year took delivery of a consignment worth over $153 million that had been shipped through Dubai. It had bought the consignment in November 2010 during one of two supervised sales the Kimberley Process temporarily allowed Zimbabwe.

Marange diamonds have also found their way into India illegally. Two Indians were arrested earlier this year as they tried to smuggle diamonds worth $2 million mined in Marange into the Indian city of Surat.

The arrests are only a tip of the iceberg, says Farai Maguwu, an outspoken critic and researcher on human rights abuses in Marange.

Finance Minister Tendai Biti has repeatedly alleged that $174 million of diamond revenue cannot be accounted for, but Mugabe has blocked his bid for an independent audit.

“There is little doubt a lot of murky dealings are happening because no one is accountable,” said Maguwu. Zimbabwe is disputing the appointment of Maguwu as the local representative of the Kimberley Process.

Profits from the secret diamond sales are funding Mugabe’s Zanu-PF party and will be used to bankroll what is expected to be a violent campaign in upcoming elections.

A report released last year by Partnership Africa Canada documents how Zimbabwe’s inner circle of political and military elites loyal to Mugabe is reaping huge profits from control over the Marange fields.

Human Rights Watch charged in August that scores of “inhuman, degrading and barbaric” attacks are taking place by police and private-security guards working for private mining companies in the Marange fields.

The Mugabe government denies all the charges.

Widespread uproar in Zimbabwe followed a deal signed in March giving away rights to diamonds worth $98 million to China in exchange for the construction of a defense college for the military.

Kimberley Process members are struggling to heal a standoff over Zimbabwe. Influential members such as the United States and the European Union are disputing a decision by KP chairman Mathieu Yamba of the Democratic Republic of the Congo to allow unsupervised exports of Marange stones.

Never has the Kimberley Process been this divided since 2000 when it was formed as a consensus regulatory body to stop the flow of diamonds mined in conflict areas or used to fund conflict.

Civic society members that are members of the Kimberley Process, along with countries such as the United States and Canada, say Marange diamonds fall into that category because of the gross human rights violations still being reported.

Zimbabwe's rich diamond deposits have been mired in human rights abuses for years. The diamonds are enriching a few people, those well-connected to the Mugabe government, while those who mine the gems suffer.