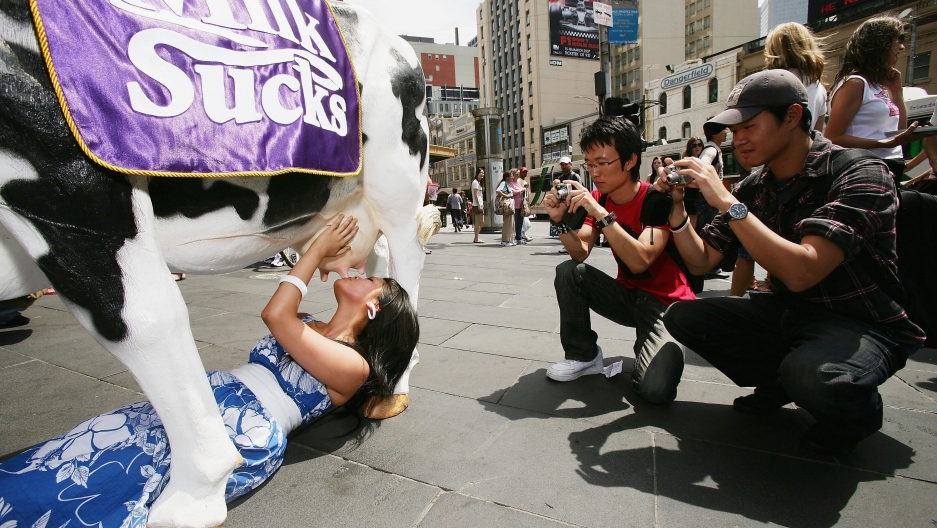 An activist sucks on the teats of a fake cow as part of Animal Liberation Victoria's "Milk Sucks" campaign launch in Melbourne, Australia. Another Australian feeling nonplussed about milk is Paul Dawson Brown, jailed for throwing some at his housemate.
Credit: Kristian Dowling
Share

We've all been tempted, but who knew that throwing a cartoon of flavored milk at a housemate was a jailable offense in Australia.

Probably not Paul Dawson Brown, who pleaded guilty to being armed with an offensive weapon — a 600 milliliter carton of Pauls brand Iced Coffee at Michael Warner.

The NT News reported that Brown, 51, was convicted and Magistrate Greg Cavanagh let him walk free from court, though not before he spent a week in jail.

Cavanagh reportedly shook his head before convicting and discharging Brown, stating for the record — and presumably those who'd missed the irony:

"He spent a week in jail for throwing a carton of flavored milk."

According to prosecutor Anna Swindley, Brown woke Warner and his wife to ask for some keys about 4.30am on Nov. 27 last year.

When Warner couldn't find the keys, Brown got angry and reportedly hurled the Pauls Iced Coffee at him, "hitting him in the forehead."

After police arrived, called by Warner, Brown was arrested and charged with two counts of aggravated assault and being armed with a weapon.

The aggravated assault charges were withdrawn, however.

Perhaps next time he could throw a straw, call it a milkshake.