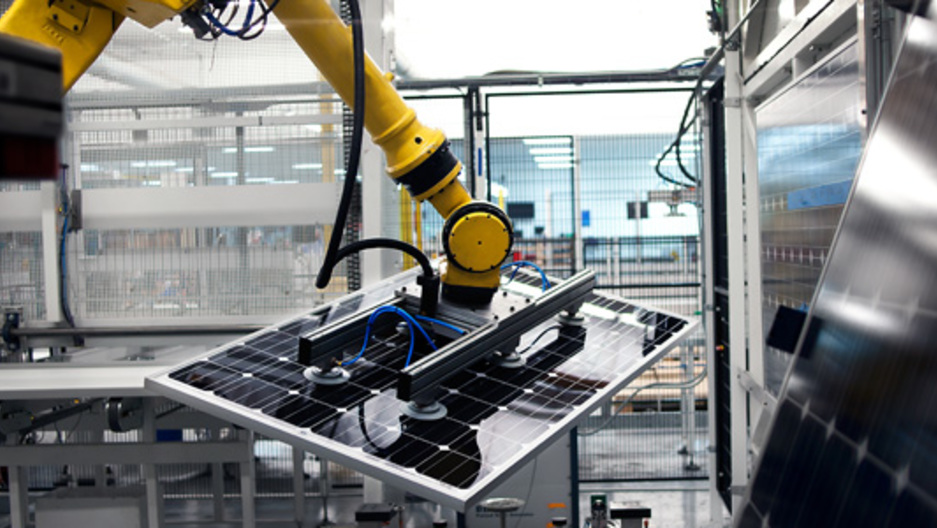 Share
When President Barack Obama came into office, he pledged to make green technologies a top priority. But now his administration is on the defensive for giving a $535 million loan guarantee to the California solar panel maker Solyndra. The company went belly up last month and laid off about 1,100 workers. And the FBI is investigating the company. Thursday, President Obama said the government should continue to support clean energy technologies. He rejected Republican claims that the US can't compete with China when it comes to making solar panels. "Part of what's happening is China and Europe, other countries, are putting enormous subsidies into these companies and giving them incentives to move offshore," said Mr. Obama. "Even if the technology was developed here in the United States, they end up going to China because the Chinese government is saying, 'We're going to help you get started, we'll help you scale up, we'll give you low-interest loans or no-interest loans… We will do whatever it takes for you to get started here." It wasn't so long ago that the US dominated solar manufacturing. In 1995, 43 percent of solar panels were built in the US, according to the Department of Energy. Today, that figure is around 5 percent. To try and figure out what happened, I visited SolarWorld in Hillsboro, Oregon, the largest solar manufacturer in the United States. The company is headquartered in Germany, but about a thousand people work in the Oregon facility. In its new factory, which opened last year, robotic arms glide across the factory, lifting, pushing, spinning and rolling solar panels from one station to the next. It's kind of mesmerizing, and very impressive. But the company is selling these panels for less than it costs to make them. Gordon Brinser, the president of SolarWorld in America, said they can't compete with Chinese manufacturers. "It's not an issue of them out innovating us. It is really, purely a subsidized manufacturing component." The Chinese government issued $30 billion in credit last year to its top solar companies. That's more than 15 times what the US government provided to American solar manufacturers. And the Chinese also subsidize things like land, power, and water. And Brinser complains that Chinese companies aren't held to the same environmental standards. "We need to wake up as a nation because we're on the verge of losing one of the core industries I believe for our future. Right now, we're dependent on Middle East for our fossil fuel oil. And very shortly, we're going to be dependent upon on the Fareast for our solar." After my visit at SolarWorld, I asked a few solar industry watchers: Is China to blame for the precipitous downturn of solar manufacturing in America? "It's a very subjective thing. I think it's really hard to make China totally out as the bad guy," said Thomas Maslin with IHS Emerging Energy Research. Joanna Lewis at Georgetown University said, "China's entry into this market has really benefited the global solar industry, in that we've seen these very sharp cost reductions and is driving the technology down the learning curve." Lewis said solar manufacturing in China actually helps the overall solar industry in the US. "When we look at the actual revenue that comes from solar projects, a lot of it comes not from manufacturing of the panels themselves, but installing the panels and preparing the sites." In other words, importing Chinese-made solar panels is putting a lot of people to work in the US putting panels on roofs and buildings. As for the solar manufacturers, Thomas Maslin said, they're struggling everywhere, in the US, Europe, even China. That's because there's been less demand for solar panels this year, especially in parts of Europe. "The reality is it's just a very difficult environment for these companies right now," said Maslin. "There's a high level of over-supply, there's a lot of downward price pressure, and therefore there's going to be a lot of consolidation, so somebody's gotta fail somewhere." Still, Maslin said, yes, it's legitimate for American manufacturers to gripe about China. But if somebody's gotta fail, somebody's gotta succeed too. I asked Shayle Kann at GTM Research how a solar manufacturer in America can make it? He said it'll be difficult to beat China at its own game, high-volume manufacturing of commoditized products. But Kann said American manufacturers can succeed in two ways. First, have a new technology that can't easily be replicated by the Chinese. Or, have a better business model. "You can imagine, one manufacturer comes to you and says, 'I'll sell you these solar panels at this price.' And another manufacturer comes to you and says, 'I will sell you these solar panels at a slightly higher price, but I will also give you all of these additional services including helping you finance these systems for your customers and lead generation, so you don't have to do that, I'll do all these things for you.' It's not actually a straightforward decision to go with the lower-priced panel in that case." Kann said SolarWorld in Oregon is one of the companies that offers more than just the panel. And that answers a question: How does SolarWorld make money if it sells its panels for below cost? SolarWorld charges extra for things like installation, maintenance and engineering expertise. And they guarantee their work for 25 years. Back at SolarWorld, Gordon Brinser said they still need government help. But he's worried that some politicians in Washington will use the Solyndra case to scale back support for the entire industry. "In the solar industry, everybody's being lumped into one bucket. And the mudslinging that's going on, we're catching some of that mud directly." Brinser said his company has been around 35 years. The technology has been around longer. But he doesn't like today's business climate. Just last week, SolarWorld shut down its California factory and laid off 186 workers. The company says it had to do that largely because of competition from China.