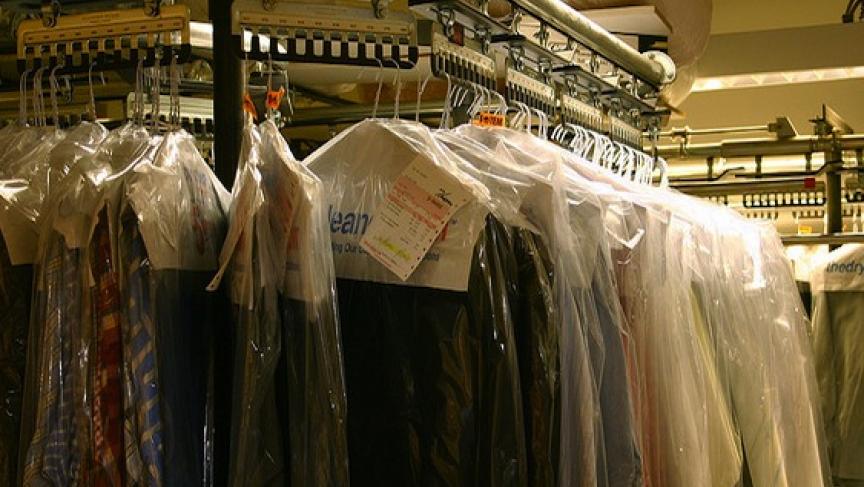 Dry cleaning can be very dirty. The process uses liquid solvents to remove soils and stains. There are federal standards for work place exposures to the chemicals that are used, but none for the residues that might linger on our clothes. In fact, no one had bothered to measure what remains in clothes until Alexa Dantzler started asking for a high school project.

"I had to take a biology honors course, and we were required to do a science fair project," she told Living on Earth. "So I was flipping through a book one day, and it mentioned perchloroethylene - classified as a probable carcinogen - has actually been found in ground water and soil that has come from the dry cleaning establishments." She wrote to Georgetown University to ask about the question and found out that the issue was chronically under-covered.

"To be honest, I was a little surprised that a high school student would be asking these questions, and I assumed that they had already been answered," Georgetown chemist Paul Roepe explained. And I did some lit searches, and some web searches, and I couldn't find anything that addressed this simple question that this bold young student was asking."

The two devised a plan to test for perchloroethylene, also known as PERC, a neurotoxicant that can cause dizziness, blurred vision, liver damage and kidney damage. "With the help of my mom - we sewed these four types of fabric: silk, cotton, wool, and polyester in little cloths, and we sewed them under jackets, so they couldn't be detected," Dantzler explains. "And we sent them to seven different dry cleaners, and after they were dry cleaned, I placed them in the freezer, and then they were taken to Georgetown and they were frozen until we were ready to extract them."

They found that wool soaks up PERC like a sponge, though other fabrics soak it up, too. "We also asked the simple question," Rope says, "if you repeat dry clean the same piece of cloth multiple times, does it build up? And we answered that indeed it does, for wool - it keeps building up quite a bit, as a matter of fact. Whereas for cotton and polyester, it sort of plateaus after two or three dry cleaning cycles."

They also asked how long it takes for the clothes to expel the chemicals after a person takes the clothing home. They found "it takes about six or seven days to release about 50 percent of the stuff from a garment," Rope says, "and that plastic wrap that they put over your clothes in the dry cleaner, we found that that really didn't influence the rate of release at all."

Some states like California and New Jersey have banned PERC and others are considering similar bans. But other chemicals still persist in the process. And while so-called green dry cleaners may advertise a safer process, "from what we can gather," Rope says that green dry cleaners, "just mean that they're not using PERC, but they could be using a whole bunch of other different things."

The actually risk of PERC and other chemicals varies from person to person. " Across a population is really all a scientist can tell you - the relative risk factor, you know, if you take a million people and do these levels of exposure, is that safe?" Rope says, "well, for some of those people, it's not. But for most of the people - are they going to get cancer within ten years from repeated exposure to dry cleaned clothing? Probably not."