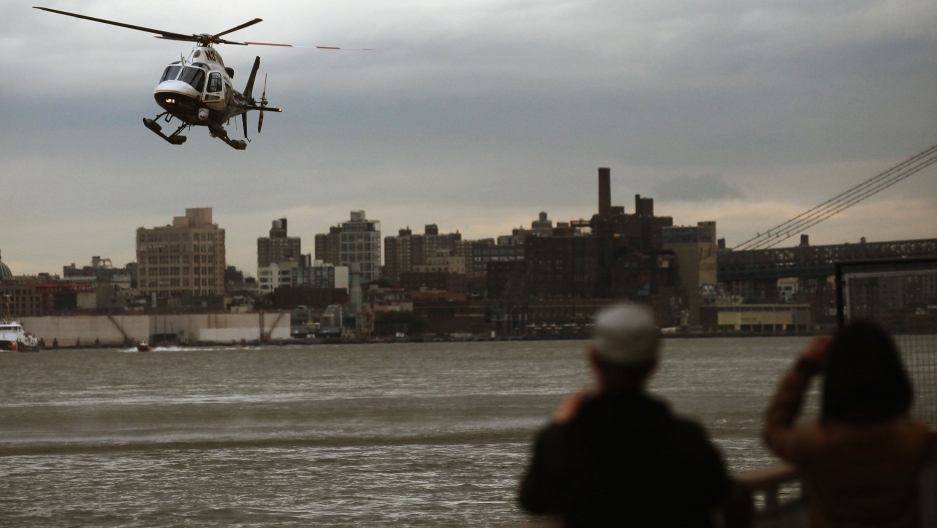 A New York Police Department helicopter hovers over the East River before landing after a helicopter crash on October 4, 2011 in New York City during a birthday joyride.
Credit: Mario Tama
Share

The only victim of a helicopter crash in New York's East River has been identified as Sydney restaurant owner Sonia Marra, 40, on a joyride for her birthday.

Three others hurt in the crash in the river near midtown Manhattan, including Marra's partner Helen Tamaki and her mother and stepfather, Paul and Harriet Nicholson, were taken to Bellevue Hospital and New York University Hospital. Two were in critical condition while the third was in serious condition.

The pilot  — Paul Dudley — was treated at the scene, Bloomberg reports.

According to the Sydney Morning Herald, Marra, a previous owner of Madame Fling Flong and Soni's restaurant in King Street, Newtown, was British but lived in Sydney with Tamaki, a New Zealander.

However, Marra was trapped in the backseat of the Bell 206 chopper and was unable to escape the craft as it inverted and sank, New York Mayor Michael Bloomberg said, CNN reports.

The New York Post reported that the helicopter sank, upside down, to the bottom of the river within minutes of the crash, at around 3:24 p.m.

CBS New York showed footage of divers and dozens of boats involved in a search for Marra.

Dudley, had radioed that he was having problems as the chopper came in to land at the 34th Street heliport, just moments before it crashed into the river, Bloomberg reportedly said.

“The pilot reported having trouble keeping aloft, and he tried to turn back but crashed into the water just north of the landing pad,” the mayor reportedly told news media at the scene. “Four out of the five got out on their own, the fifth got trapped.”

The AP earlier spoke to an eyewitness, Joy Garnett, who said the chopper was about 25 feet off the ground before it dropped into the water without much of a splash:

"I thought, 'Is that some daredevil move?'" she said. "But it was obviously out of control. The body spun around at least two or three times, and then it went down."

NBC News reports that Dudley had been involved in an emergency landing once before in New York, safely landing a Cessna 172 in Calvert Vaux Park near Coney Island in November 2006.

Dudley, a reported 20-year veteran pilot, is the director of the municipal airport in Linden, N.J., a small general aviation airport that is home to many sightseeing and commuter pilots that fly over New York City.

"There have been at least 28 helicopter crashes in our city over the last three decades," Bloomberg quoted Maloney, a Democrat who represents Manhattan's East Side in Congress, as saying. "Federal transportation officials should investigate not only the causes of this crash, but also whether it is safe to have such a high volume of helicopter traffic over our densely populated city."

The Bell 206 is popular with TV stations and air taxi companies as they are light and maneuverable, costing between $700,000 and $1.2 million new, the AP reports.

Helicopters that fly under 1,000 feet are not in contact air traffic controllers and don't file a flight plan.

Meanwhile, Aleks Dawson, a former Sydneysider who now lives in New York, was quoted by the SMH describing Marra as "cool, tough and a little bit scary at first ... but she was actually very down to earth and to the point."