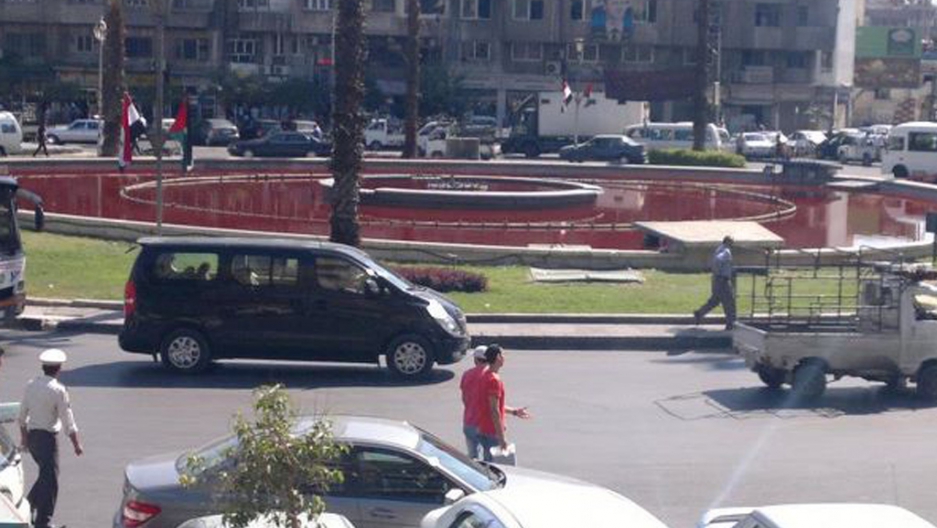 Protestors in Damascus stained a fountain red to symbolize the "blood of martyrs" in the wake of Russia's veto of a UN Security Council resolution condemning the Assad regime's violent crackdown.
Share

Two striking videos emerged today painting a grim picture of the struggle for freedom in Syria as Russia and China blocked what would have been the first legally binding UN Security Council resolution against the Assad regime’s crackdown on protestors.

In the first, here, mobile phone footage taken from a car shows a fountain in a roundabout in Damascus stained red to represent, what the title of the video calls, the “blood of martyrs.”

In the second video, here, the terrified voice of a woman is heard crying out to God as security forces are seen kicking down the door to what appears to be her home. An activist in the area said the security forces were being aided by one of Syria’s many citizen spies, who is seen in the clip wearing a scarf around his face.

Read GlobalPost: Who Watches the Watchers?

An activist with the opposition Coalition of Free Damascenes For Peaceful Change told GlobalPost Syrians like him were “so angry” about the failed UN resolution.

“A lot of people are asking why this revolution should not be armed. We expect the coming days to be the bloodiest,” he said. “We believe the whole world is against us, but we will not go back. Our eyes look forward to a new Syria, pluralistic and democratic, without the Assad regime.”

South Africa, led by the ANC party which fought its own grueling campaign against apartheid repression and benefitted greatly from international support, abstained from supporting the resolution against Assad, joined by India, Brazil and Lebanon.

“Some capitals are being overly hasty in passing their judgment about the illegitimacy of the leaders in Syria,” Russia's ambassador to the UN Vitaly Churkin told reporters after the vote.

Since the Cold War era, Syria has been Russia’s main strategic ally in the region and a major client for Russian military hardware and weapons.

“After fall of the regime the Syrian people will not continue the same old relations with Russia,” Iyas Maleh, a prominent opposition figure told GlobalPost, but said the vote would not deter protestors. “I don’t think the Syrian people when went out to demonstrate counting on anything except their own will. I don’t think anybody can stand in the way of the will of the people.”