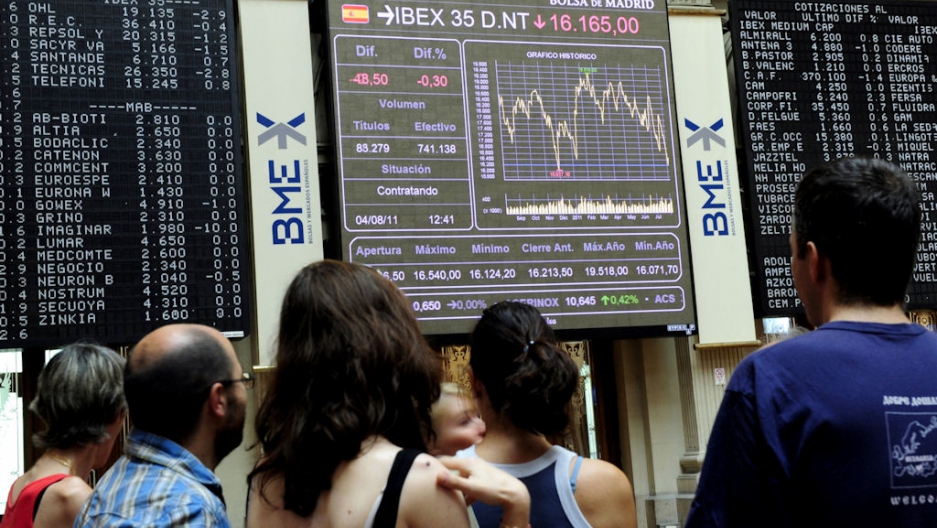 The country had its credit rating downgraded by Moodys three notches with a negative outlook for the future. For all the complaints about the agencies and their criteria for these pronouncements they can still shape perception about a nation's creditworthiness. The fear has to be that interest rates on Italian bonds will continue to rise, although Moody's report indicates that Italy in likely to default.

The BBC quoted Emma Marcegaglia, the head of Italy's leading industrial association, Confindustria, on the matter of Berlusconi and the ratings downgrade

"We are a serious country and we are fed up at becoming the laughing stock of the world."

When Italy has to start paying interest rates over 6% (nudging in that direction since last week) on its bonds it won't be very funny.

Unemployment figures for Europe's fourth largest economy were released yesterday and they are horrifying: another 95,000 people lost their jobs in September - twice as many people as in the same month a year ago. The unemployment rate is now 21 percent. Almost half of 16 to 24 year olds can't find work.

Some of the rise in unemployment is seasonal: tourism is a major component of the Spanish economy and with the season over many temporary employees lose their jobs. But the Spanish government has been laying workers off to reduce the Spanish deficit and that has to be the main reason for the big jump.

Probably the biggest shaper of events yesterday was the panic over Dexia, a Franco-Belgian owned bank. Three months ago it passed the E.U.'s stress test and seemed sound. Yesterday investor fears about its exposure to Greek debt drove its share price down by a fifth. Those fears about the bank widened into a general market panic.
The French and Belgian governments stepped in and announced they would not let the bank fail. The likely plan is to break up Dexia and put its toxic assets into a bad bank, and allow the profitable aspects of the business to continue. More here, from my Globalost colleague David Case.

And, as a bonus, here's a fourth bad thing:

Result of all this bad news: the FTSE closed below 5000 for the first time since 2010 ... it was up 1.3 percent when markets opened today ... despite more strikes in Greece ... although by the time you have read these words, lord knows what global markets will be doing.

But don't worry, some traders will be getting very rich betting on any number of movements up or down ... It's the way of the world: unchanged since Lehman's crashed three years ago. (Here's a task for an enterprising graduate student: tote up the dollar amount spent on G-20/IMF emergency meetings and summits to discuss how to re-regulate these markets over the last three years. Let me know and I will blog about the wasted tens of millions of dollars - not to mention the carbon eructated into the atmosphere ferrying the leaders and their brilliant advisers to and from the meetings).

Part 2: Fiddling while the world burns

While the tidal wave from Europe approached, over at Briatin's Conservative Party Conference in Manchester it was all about the cat.

The Tory Conference is about stroking the party's grassroots and while they aren't quite as assertive and off the charts bonkers as those who claim to be "conservatives" in America, they are considerably further to the right than Prime Minister David Cameron.

Red meat issues for them are immigration and the socialist hell that is the European Union (even though many of them own holiday homes in France, Italy and Spain).

Home Secretary Theresa May - in charge of law & order - must have thought she hit a home run when she told the conference yesterday the tale of the illegal immigrant who could not be deported because of his cat. According to May, the judge in the case invoked the E.U.'s Human Rights act - to which Britain is a signatory - and refused to deport the man because under the act immigrants and criminals cannot be sent back to their countries of origin if it will break up their local family (I paraphrase). Anyway, the implication of May's story is the judge considered the fellow's cat as family!!!!

Yah-Boo-Hiss to those rules imposed by Europe on free born Englishmen.

Turns out May put he leopardskin shoes in it because, of course, it wasn't true. Nor was it the press that uncovered that fact. Almost immediately, May's cabinet colleague, Justice Secretary, Ken Clarke, in charge of courts and prisons and the most liberal Conservative in Britain, went on the air to say it was not true and challenged May to put up or shut up. The story rumbled on throughout the rest of the news cycle adding a little light relief to an otherwise dark day here.

BTW, there was, in fact a cat mentioned in court papers related to the case, but it had nothing to do with the judgment. My guess is somewhere in May's office is a researcher who is about to join the swelling ranks of Britain's unemployed.