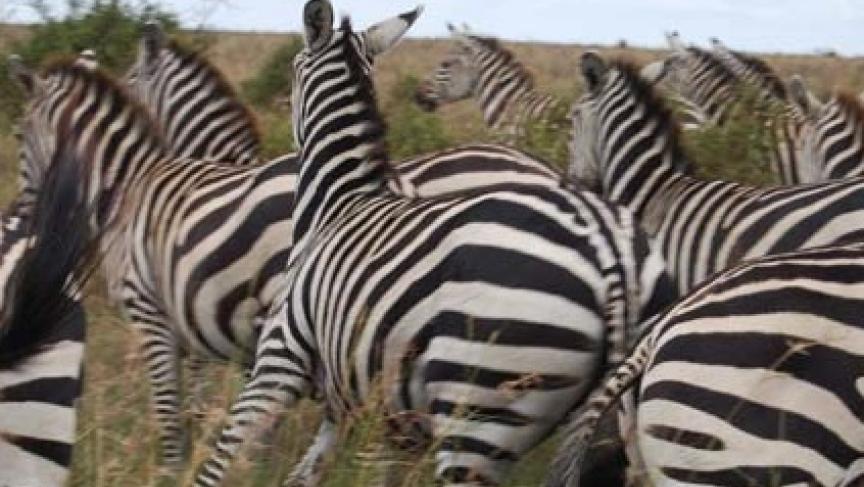 Photo of Zebras at the Nairobi National Park, Kenya. (Image by Anders Kelto)

Story by Anders Kelto, PRI's The World. Listen to audio above for full report.

It is a scene that people from around the world pay thousands of dollars to see: a pack of zebras wading through the tall grass on the East African savannah, followed by a small herd of galloping wildebeests.

Every year, millions of these and other animals make a famous migration across the Serengeti Plain. Most head to the vast parks and reserves of Tanzania and southwestern Kenya, but many end up in Nairobi National Park, 45-square miles of open land almost completely surrounded by Kenya’s capital city.

Nairobi National Park is a big swath of African wilderness in the midst of one of the continent’s biggest cities. But the growth of the city itself is choking off the park, and its animal populations are plummeting.

“Usually the numbers are in hundreds or in thousands,” park ranger Muraya Githinji said on a recent visit to the park. “What we are getting now is just a trickle-maybe very small herds and groups of about 30.

The problem, Githinji says, is humans. Most of the park is surrounded by a 10-foot fence. The only unfenced section is a 12-mile wide stretch on the park’s southern border, where the animals are supposed to be able to move in and out. But even there, people are starting to close in.

The so-called “dispersal area” just beyond the park’s open boundary is way off the usual tourist track, accessible only by an uncomfortable trip over a rutted road that crosses a wild river.

But the open savannah on the other side is hardly an undisturbed plain. Instead, the landscape is dominated by a huge gash in the ground, and a group of men breaking up rocks.

Githinji says it’s one of dozens of quarries in the area. It’s nearly a quarter mile wide and more than fifty feet deep

“There’s no animal that can be able to climb up or down these steep banks,” Githinji says.

Githinji says the quarries are all serving a local construction boom. New residents are pouring into the Nairobi area, and they need places to live and work. Some are even settling right here in the dispersal area.

Wilson Kisemei is a herdsman who lives with his family in an informal settlement of metal shacks not far from the quarry. Their home is right in the thick of the migration route, and Kisemei says there are wildebeests around all the time.

“Especially during the evening hours, at night,” he says. “They are even coming up to our homes.”

The close proximity isn’t good for the animals or the humans. But Kisemei says his family has no choice about where they live.

“This is our area. This is our land. And we have no other place to go.”

Park managers are acutely aware of the problem. From his office in the park’s headquarters, assistant director of the Kenyan Wildlife Services Wilson Korir sees pressure building on the park from all directions-from settlers in the dispersal area to developers who he says want to turn the entire park into real estate. And he worries that the pressures could eventually strangle the animals’ migration route.

“If they are not able to move in and out seasonally like they do, if something happens to that migration, then most likely the park will die,” Korir says.

That might not be a big deal for Kenya’s wildlife as a whole, Korir says. The Nairobi park is relatively small, and it’s home to just a fraction of the region’s animals. But he says it would be a big blow to the region’s humans.

Read the rest of this story and view a slideshow on The World website.