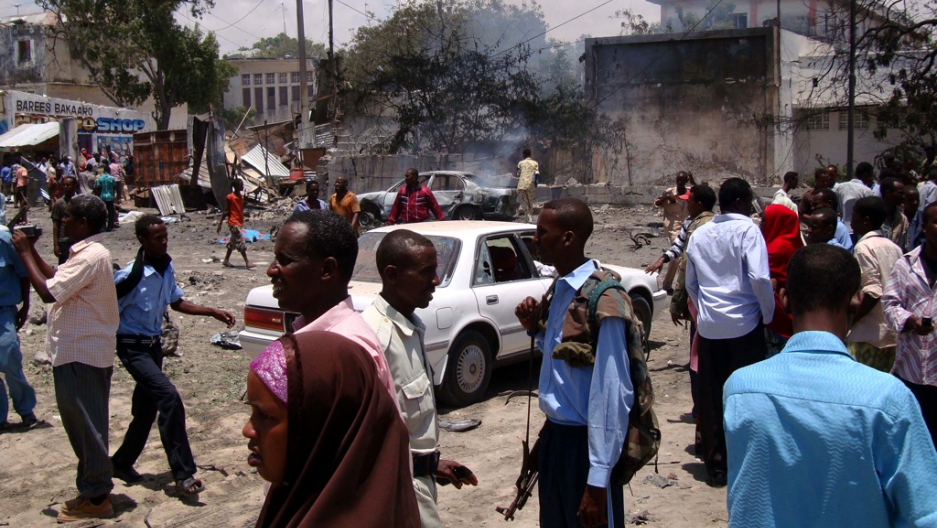 People mill around the scene where a suicide attack took place in Somalia's capital Mogadishu on October 4, 2011. A suicide bomb blast claimed by Somalia's Al Qaeda-allied rebels killed at least 65 people in Mogadishu, the first such attack by the insurgents since pulling out of the city in August. The explosion went off in a compound housing four ministries of the Western-backed Transitional Federal Government (TFG), and government officials were among the wounded.
Credit: Stringer
Share

NAIROBI, Kenya — At least 65 people were killed and dozens more injured when a massive suicide truck bomb exploded in the Somali capital Mogadishu Tuesday in an attack claimed by Islamist militants.

It is the most deadly suicide bombing ever in Somalia and the death toll is predicted to rise as bodies are still being pulled from the rubble and some of the survivors sustained terrible burns and wounds.

Al Shabaab, an Islamist group that has pledged allegiance to Al Qaeda, pulled out of the capital in early August and threatened to carry out insurgent attacks targeting the government and foreign soldiers. It had not made good on the threats until Tuesday.

Witnesses described a truck pulling up outside a compound containing a number of government buildings close to the Kilometer-4 (K4) traffic circle in a busy part of the city under the nominal control of the government and soldiers from the African Union peacekeeping mission (AMISOM).

The explosion that followed shook Mogadishu's already war-damaged buildings, blew out windows, ignited nearby vehicles and kiosks and scattered the streets with charred bodies and dismembered limbs.

“It is the most awful tragedy I have ever seen,” said Ali Abdullahi, a nurse at the nearby Medina hospital where the injured were being treated and where weeping relatives were made to wait outside for fear of a follow-up attack.

Some of the walking wounded made their own way, blackened and burned, to the hospital compound a mile away.

“Imagine, dozens are being brought here minute by minute. Most of the wounded people are unconscious and others have their faces blackened by smoke and heat,” he told the Associated Press.

Somalia’s U.N.-backed Transitional Federal Government (TFG) said that 15 people had been killed and another 20 injured, but Ali Muse, the head of Mogadishu’s ambulance service, told AP the death toll was far higher.

“The explosion has not only affected the targeted place, but even passer-by people and car passengers died there,” said Muse. “The death toll may increase and we are still carrying many dead bodies.”

He said at least 70 had died and another 42 were hurt in the blast that threw a thick plume of black smoke into the sky above K4.

The government statement said the explosion happened at “a ministerial compound in the heart of the capital.”

“The casualties are mostly students and parents who were waiting for results of scholarships from the Ministry of Higher Education,” the statement said. Reports said the students were hoping to win scholarships to study in Turkey.

According to eyewitnesses a number of government soldiers who were billeted to protect the government compound were also among the dead.

“The attack shows the danger from terrorists is not yet over and that there are obviously still people who want to derail the advances that the Somali people have made towards peace,” the statement continued.

Al Shabaab immediately claimed responsibility for the attack. “Our Mujahideen fighters have entered a place where ministers and AMISOM foreigners stay,” the extremists said in a brief statement posted on a Somali language website used by the group.

Suicide bombings have become a feature of the Al Shabaab insurgency, which began four years ago. Attacks in the capital Mogadishu have targeted
the AMISOM headquarters, a university graduation ceremony, a police training camp, the homes of government officials, a hotel and even a mosque.

Outside Somalia, Al Shabaab conducted its deadliest attack ever when multiple suicide bombers detonated themselves in Kampala, Uganda, killing 76 people in July last year. That attack was in retaliation for Uganda sending thousands of its troops to Somalia, making up the bulk of the now 9,000 strong AMISOM force.

The ongoing fighting between Al Shabaab and the AMISOM-backed government forces have exacerbated a drought afflicting the entire Horn of Africa
plunging some parts of Somalia into a famine that now threatens 750,000 lives, according to U.N. estimates.

More from GlobalPost: Life in Hell: Under fire in Mogadishu