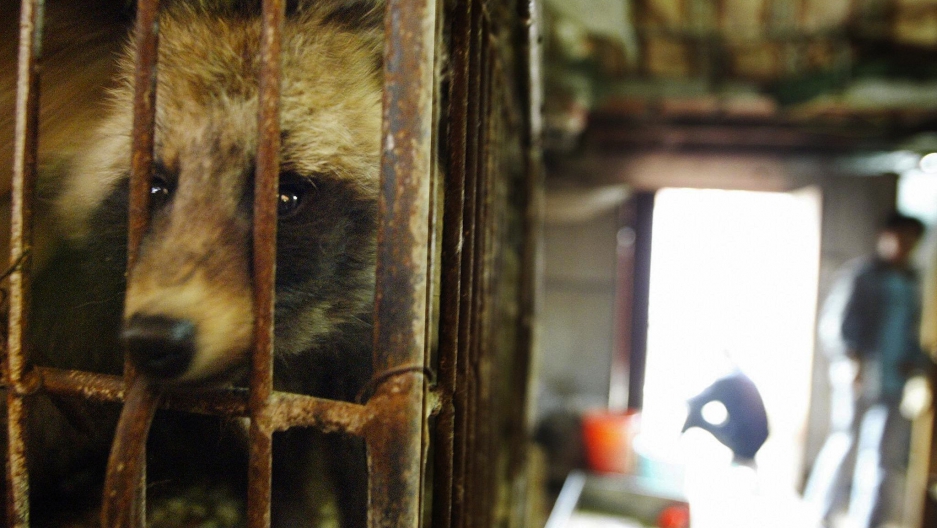 A raccoon dog destined for the dinner table looks out of its cage in Xin Yuan wild animal market in the southern Chinese city of Guangzhou in 2004.
Credit: Peter Parks
Share

Horrific video of animals being skinned alive for their pelts in China have featured in Australian news reports on the illicit trade in dog fur.

The fur is even being used to make the iconic Aussie ugg boot, according to one report, which cites claims by the Humane Society International.

In another report, on Australia's 10 Network, an animal welfare activist is seen holding what appears to be a variation on the ugg boot — labeled the MuggBoot.

According to the reports, tests on a range of clothing detected the fur of raccoon dogs, a breed "mainly farmed in China where the animals are kept in unbelievably cruel conditions before being beaten and then skinned alive."

Raccoon dogs are neither dog nor raccoon, but are reportedly closely related to wolves, foxes, jackals and coyotes.

The latest report includes a graphic video taken by Swiss Animal Protection showing the animals being skinned alive and then thrown on a heap.

In one instance an animal is still able to weakly raise its head after having its skin and fur cut off.

Animal advocacy group Care for the Wild, in a report on animals reared on Chinese fur farms, confirms that many animals are alive and fully conscious while being skinned "and remained so for up to 10 minutes afterwards!"

PETA and the Humane Society of the United States have also conducted undercover investigations into the international trade in dog and cat fur and reported back, complete with disturbing footage.

The latest video footage is apparently nothing new — Down Under found a version embedded in an Encyclopedia Britannica entry in 2010, which in turn cites an Animal Blawg entry from May 2009.

Down Under viewed a censored version of the video on a current affairs TV program and didn't feel the need to relive the experience, let alone subject anyone else. The sound of the dog's agony will stick in the memory for some time to come.

For those still curious, this story provides all the links you'll need.

By McDonald's estimation, anywhere from 30 to 40 products used the word “ugg,” many of them not made in Australia, and several use fur.

“As far as I can see many of these boots are not made in Australia at all yet they have the word Australia and ugg on them," she said. “Labeling laws in Australia are a little bit grey and we have seen companies cutting off tags saying ‘made in China’ and the Australian made tag put on it."

What this correspondent — born and raised in Australia — has never been able to establish is why, in country where average temperatures rarely drop to freezing, people need furry (faux or otherwise) footwear at all.