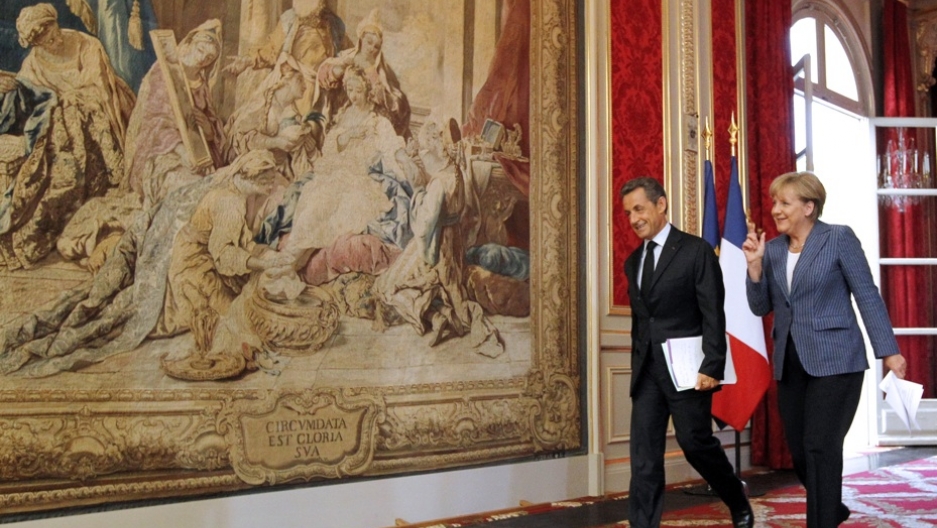 France's president Nicolas Sarkozy and German Chancellor Angela Merkel arrive for a joint press conference at the Elysee presidential palace in Paris on August 16, 2011 after a meeting between the two leaders on debt crisis.
Credit: Patrick Kovarik
Share

Manchester, England - All politics is local - even when the global economy is collapsing around your ears.

Example 1:  The Conservative Party is holding its annual conference here and the party activists are already disappointed.  They will not be getting their collective hearts' desire: a referendum on whether Britain should stay in the European Union.

It's not for want of trying.  Yesterday's Mail on Sunday, the Fox News of British papers, trumpeted on its front page: "At Last: We get Vote on Europe ... "  As Tory Eurosceptics were happily digesting that news along with their full English breakfasts, their party leader, British Prime Minister David Cameron was telling the BBC that there would be no such thing.

It is hard to explain just how ingrained hatred of the European Union is in the Conservative grassroots. The EU symbolizes all that is wicked in social democracy, it also symbolizes the resurgence of France and Germany, the two nations whose wars Britain was drawn into and bankrupted by (most Tories today were not alive for either World War but no matter).

In or out, the reality is the current situation inside the Eurozone would be having a negative effect on Britain's flatlining economy.  As this excellent article in the Financial Times points out.   It's behind a paywall but the essence is contained in this quote from an unnamed British Treasury official,  “From the modelling we have done, the uncertainty [about the single currency] is already affecting the recovery and the risks [of a break-up] would be very, very great."  Treasury officials are not prone to overstatement, so that is a very serious piece of analysis.

It won't stop the Tory party faithful from being disgruntled with Cameron, who they think is betraying the Euro-sceptic legacy of Margaret Thatcher.  Kind of hard on Cameron, really, considering that the 35,000 trade union activists who were demonstrating outside the Manchester Conference Center where the Tories are meeting were carrying thousands of signs saying there was no difference between Thatcher and Cameron.

The guy can't win, I suppose ... which is why he is in a coalition.

Example 2:  More off-message grumbling from partners in German Chancellor Angela Merkel's coalition:   Alexander Dobrindt, of the Christian Social Union, told German Radio yesterday, that Greece should leave the Euro and rejoin at a later date, if it wished. “I believe it is a solution, if one wants to bring Greece back into a economically stable competitive condition, that this would be done outside the euro zone,” he said in widely reported comments.

Dobrindt's comments played into the ongoing narrative that solvent and dynamic Germany will no longer bankroll debt-ridden Greece.

But Greece isn't going to leave the euro - yet. Nor is Merkel going to push for such drastic action or consider it.   It is not her style, nor is it the style of any German leader. Here in Manchester, I found myself chatting with Thomas Kielinger, the esteemed columnist of German daily, Die Welt. He told me that opinion makers in Britain and America simply don't understand the way Germany works when it comes to Europe. "Germany works on consensus with others, it does not act alone." Despite domestic political pressure within her coalition, Herr Kielinger added, "Merkel will not be the person to force the breaking up of the eurozone."

I hope euro short sellers in London and New York are pricing in that fact ... the political will remains strong for maintaining Greece in the euro.

All politics is local - sadly, all markets are global ... this explains a lot about the crisis.