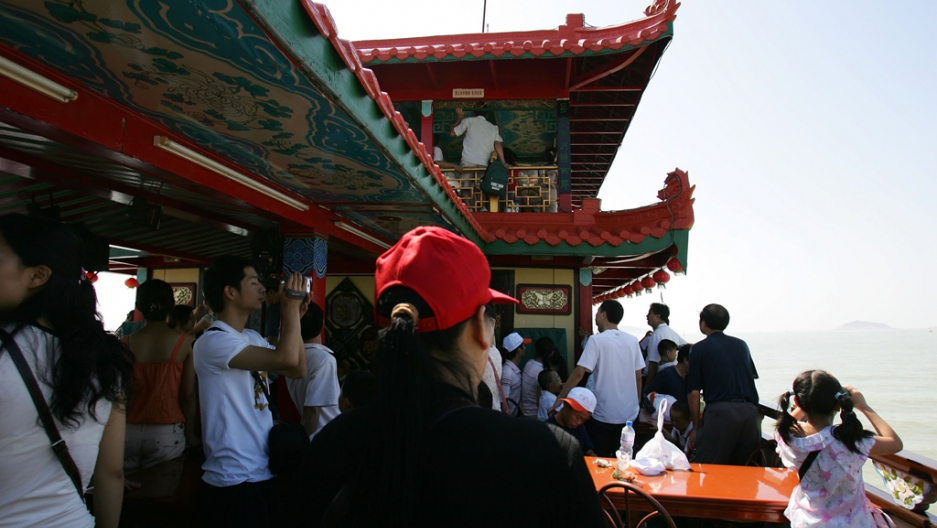 KINMEN, Taiwan — Just decades ago, all that mainland China brought to Kinmen, a tiny Taiwan-controlled island off the Fujian coast, was trouble.

In the mid-50s, China launched two brutal artillery campaigns that killed over 2,600 island residents and soldiers and prompted the United States to threaten Beijing with a “nuclear response” if the islands were taken.

Taiwan and China then embarked on a strange informal agreement, whereby both sides shelled each other with propaganda leaflets on alternate days. Sunday was deemed a rest day. This continued right up until Washington normalized relations with Beijing in 1979.

But today, in many ways, the tables have turned. The hundreds of thousands of shells that pummeled this tiny island have been replaced by new weapons in the protracted China-Taiwan relationship — Chinese tourists.

Thanks to China's massive rise in economic power and improving ties between the former foes, tourists from the mainland are making their way to select Taiwan destinations — and how.

These days, business in Kinmen is booming.

In 2010, about 340,000 Chinese tourists embarked on the bumpy 30-minute ferry ride from boomtown Xiamen to Taipei’s strategic bulwark in the Taiwan Strait.

Combined, they pumped about $300 million into a nascent economy, which for decades, had been largely dependent on Taipei’s largesse and tax revenues from Kaoliang — a brutally strong rice wine, and the county’s biggest export.

Those figures are expected to rise dramatically on the back of a landmark decision in July to open up Taiwan to independent Chinese travelers. Previously, only strictly controlled tour groups of the well-heeled from Beijing, Shanghai and Shenzhen were permitted to visit.

It used to be the Taiwanese that were considered the rich kids on the block, with the mainland in the position of trying to lure them home. Now, amid more trying economic times, it's the Chinese tourists that Taiwan desperately needs to keep the cash registers ringing.

What's in it for Kinmen?

“The war taught us to hate the Chinese. But our shared histories are very much alive,” said Wu Tseng-dong, a Kinmen artisan who has made a name for himself by fashioning high-quality knives from spent Chinese artillery rounds.

“While it’s true that our relationship has been a pretty mixed bag, it’s also true that it’s the future that matters now,” he said.

What also matters, particularly for Taiwan’s nationalist Kuomintang government and incumbent president Ma Ying-jeou, is the present, and economic development of what was a frontline of hostilities following China’s civil-war split between Mao Zedong’s Communist and Chiang Kai-shek’s Nationalist forces in 1949.

But yesterday’s animosity has given way to today’s curiosity, and Kinmen now caters to the curious by converting military facilities into tourist traps and building museums with wartime themes that focus on the two sides’ turbulent past.

“War is cold and indifferent,” says Wu. “Just as we turn these cold shells into art, we are moving in from the cold and into a place of tolerance and good will.”

The draw to Kinmen

This tiny island, which would be a prime candidate for World Heritage site status if not for Taiwan’s diplomatic isolation and exclusion from all United Nations bodies, has a unique appeal for the nostalgic, tradition-minded Chinese tourist.

Located closer to the mainland than it is to Taiwan, Kinmen is about a third the size of New Orleans. Half a century of military control put the brakes on urbanization and halted wrecking balls hell-bent on carving out huge swathes of its architectural tapestry.

“Martial law regulations such as a ban on buildings above three floors in case they became bombing targets placed us in a time capsule. The Chinese, on the other hand, have grown so quickly that much of their traditional culture and architecture has already been lost,” said Andy Yang, director of the Kinmen Tourism Bureau.

Kinmen’s townships are littered with immaculately restored Fujian style swallowtail-roofed compounds from the Ming and Qing Dynasties, some of which date back to the 16th century.

In all, about 40 of them have been converted into boutique hotels through a government-run program that promotes the conservation of the island’s cultural heritage.

“I’ve been all over Taiwan,” said Chen Hung-po, an engineer from Beijing. “Taipei didn’t seem much different from Beijing except the shopping wasn’t as good and it’s smaller. But Kinmen reminds me of the old days. Everything’s so clean and relaxed.”

It says much about the breakneck development of the awoken giant across the Strait that until recently, its citizens viewed Taiwan in much the same way East Germans once imagined life over the wall: an economic utopia, where opportunities flowed and success was abundant.

Fast-forward to the present, and it’s the Chinese who often view the Taiwanese as their quaint backcountry cousins, and the Taiwanese who dream of getting rich quick in one of China’s second-tier metropolises.

“Xaimen and Kinmen are like two sisters who were raised by different families,” said David Wang, a Taipei transplant who manages three guesthouses.

“We are still dominated by our differing political and social systems, but we share similarities, like our food, weather and unique drinking culture. Although, after a few rounds of Kaoliang, everybody’s red-faced and you can’t really tell us apart,” he added.