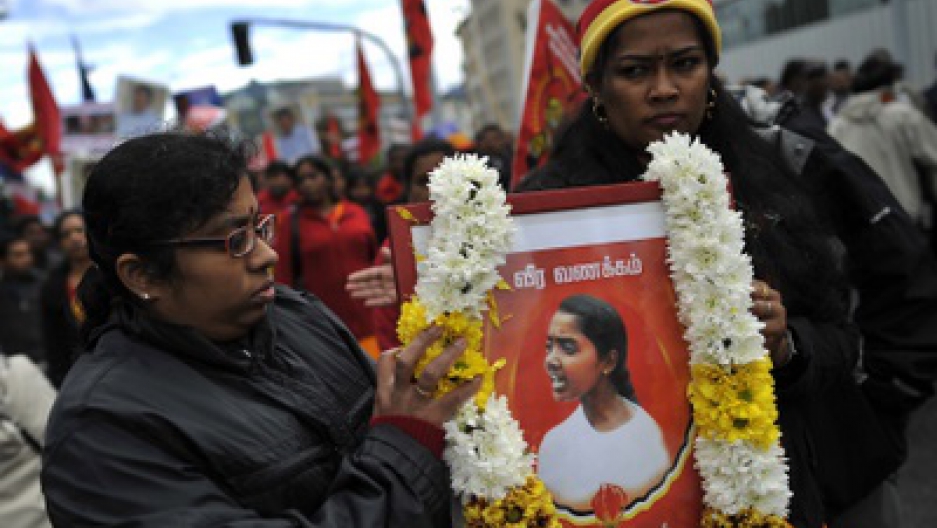 Two women hold a portrait of a casualty of war during a demonstration on September 19, 2011 at the UN's European headquarters in Geneva calling for a probe into alleged war crimes committed by Sri Lanka at the end of the country's brutal civil war against separatist Tamils in 2009. According to local police, around 1,000 protesters gathered in Geneva's iconic Place des Nations, to urge the Human Rights Council to investigate the killing of tens of thousands of civilians by Sri Lanka forces at the end of the country's brutal war against separatist Tamils in 2009.
Credit: FABRICE COFFRINI
Share

Social networkers and good old fashioned newspapers may have the unique opportunity to serve Sri Lankan President Mahinda Rajapaksa a summons to answer for his alleged role in extrajudicial killings during the civil war between government forces and Tamil insurgents.

According to a press release issued by Bruce Fein, the lawyer for the plaintiffs in a lawsuit seeking $30 million in damages from Rajapaksa for alleged offenses that occurred during his command responsibility as head of state and commander-in-chief of the armed forces, Fein has moved for permission to serve a summons to Rajapaksa by alternative means, such as publishing notices in newspapers circulated in Sri Lanka and social media.

“Basically, it [may mean] the President can be served via the Internet, Facebook and Twitter and email. The President can no longer claim he is unaware of the charges alleged against him,” the statement quoted Fein as saying.

The complaint holds Rajapaksa responsible for the alleged extrajudicial killings of Ragihar Manoharan, the son of Plaintiff Dr. Kasippillai Manoharan, Premas Anandarajah, a humanitarian aid worker for Action Against Hunger, and first husband of Plaintiff Kalaiselvi Lavan, and four members of the Tevarajah family, all relatives of Plaintiff Jeyakumar Aiyathurai, the statement said.

International human rights groups and advocates for press freedom will monitor the Sri Lankan media to track the publications which publish the summons and take note of any repercussions that media outlets or journalists may face for deciding to publish the complaint, the press release said.

“In 2010, Reporters Sans Frontiers ranked Sri Lanka as the fifth deadliest country for a reporter to work in," Fein said. "In the final phase of the war, 14 journalists were murdered or disappeared and dozens more had to flee the country or risk losing their lives.”

Until now all attempts to serve the summons on the president have been refused including those under the Hague Convention, but international pressure on the regime is mounting.

After filing the motion, a Judge will rule if the summons can be served via press or petitioned electronic means. In the meantime, Sri Lankans along with millions of readers worldwide will be made aware for the first time of the detailed charges alleged against the President.