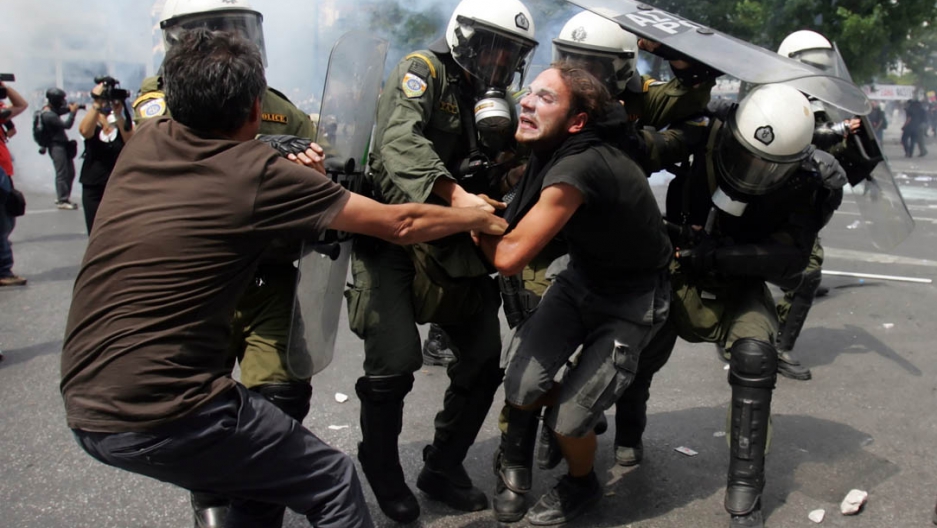 Riot police arrest demonstrators as they clash with police during a protest against plans for new austerity measures on June 28, 2011 in Athens, Greece.
Credit: Milos Bicanski
Share

ATHENS – As Greece’s colossal debt problems weigh on the global economy, its wealthy have become famous for their brazen unwillingness to pay taxes.

By some estimates, a third of Greek taxes go unpaid, amounting to $20 billion or more. At least half of the country’s budget shortfall could be eliminated if only the government could collect these revenues.

So, in addition to enacting the harsh budget cuts that are triggering unrest among the working class, Greek authorities are deploying novel methods to smoke out tax dodgers.

From Greece: "Don't blame us"

They have shut down nightclubs for not issuing receipts for transactions. They have flown helicopters above homes to chart undocumented swimming pools.

And now, a public-shaming campaign is underway to collect overdue taxes and rebuild trust with ordinary Greeks resentful of sweeping austerity measures.

A list of 6,000 businesses owing a total of $41 billion in taxes and penalties was released recently, but with little fanfare, as many of those businesses went bankrupt years ago.

But it's the upcoming docket of individual cheaters that has Greeks talking. Although tax evasion is rampant in every class of Greek society, it's well known that wealthy Greeks vastly under-reporting their income and assets include doctors, lawyers, and other influential Greeks.

"It sends a good message — there will be consequences," said Costas Bakouris, chairman of the Greek chapter of Transparency International, an anti-corruption watchdog organization. "Up to now, there were no consequences."

"People want to protect their reputation," he added. "The stakes are too high for them."

Tax evasion had become an accepted part of Greek culture in recent decades, largely facilitated by corrupt tax collectors and a "shadow" economy of cash and no receipts. It's one reason, along with massive overspending, why Greece was forced to accept a $150 billion bailout last year from its European partners and the International Monetary Fund.

The system is so leaky that officials decided it would be easier to collect a new, deeply unpopular property tax via electricity bills: households that fail to pay are threatened with power cuts. A massive overhaul of the tax system was launched last year.

Greece is not alone in its shaming campaign. In Bangalore, India, officials send drummers to the homes of tax cheats to chant slogans and rouse the neighbors. India and Pakistan also have paid transgendered people — who are scorned in those cultures — to loudly knock on doors of tax delinquents as neighbors look on.

Most U.S. states that use shame campaigns simply publish names on the internet. O.J. Simpson and actor Burt Reynolds have appeared at different times on California's list of delinquent taxpayers.

California has collected $82 million since it began publishing its list in 2007. It sends a warning to the taxpayer via certified mail that their name will be published unless the debt is resolved within a month.

"We get most of the revenue before the list is posted — at the point we provide notice to taxpayers that they are subject to being listed on our website," said Denise Azimi, spokeswoman for the state's tax board.

Greece has chosen to release its information to the media. Unlike the U.S. states, there appears to be no dedicated website for the campaign.

The list of businesses — those that owe more than $200,000 — drew local media attention. But observers were critical, saying many of the companies no longer exist. In addition, the top debtor was the state-owned rail company, at $1.7 billion.

The soccer club AEK was listed as owing $140 million, but club spokesman John Markoulas said the figures are pre-2004, under prior ownership. A court ruling in 2004 wiped out nearly all of the club's debts.

"The debts of AEK fell by 95 percent by law in the summer of 2004, but the list shows the total amount ignoring this law," Markoulas wrote in an emailed statement. "This list is not valid because it includes companies that have disappeared for years."

Bakouris, of Transparency International, agreed with AEK's assessment. Finance Ministry officials did not return messages seeking comment. The ministry has told media outlets that it is awaiting approval from Greece's data privacy agency before publishing the list of individuals.

But, in a reminder that cultural norms don't change overnight, some Greeks remain skeptical of their government.

From London: Throwing Greece under the bus

"I don't care about lists," said Dionisis, a 44-year-old who was laid off more than a year ago from his job as a production supervisor at a bread company. He preferred to not give his last name.

"I don't have money," he said as he waited for a friend near a train station in the suburb of Marousi. "If I see names on a list, will I have money to buy bread and things I need?"

Publication of lists won't give Dionisis a sense of social justice, but criminal prosecution might.

"If I see them in prison, maybe I'd feel a little bit better," he said.

That would be unusual for Greece, but investigations were opened last year when spot inspections of doctors — who regularly expect envelopes of cash from patients in exchange for better care — found widespread tax evasion.

Investigators, for example, studied the books of 12 doctors who between 2001 and 2008 reported total income of $16.5 million, but their bank deposits in the same period exceeded $41 million, according to the Finance Ministry. More than one-fifth of the 150 medical professionals surveyed reported income so low that they qualified for "tax free" status.

Greece's tax overhaul, outlined earlier this year, aims to increase tax revenues by almost $17 billion between this year and 2013. Among the ways to achieve the goal: "identification and exemplary punishment of large-scale evasion," the action plan states.

Prime Minister George Papandreou's administration, which stepped into a $400 billion public debt when it took office in October 2009, has continually appealed to Greeks' morality when it comes to paying taxes.

"It is not acceptable having scientists or a businessman declaring an annual income of less than [$14,000] when they owe tax services a few million [dollars] each," Finance Minister Evangelos Venizelos said Sept. 11.

"Such persons must provide a credible explanation for this, explain to their fellow citizens why this has happened, explain it to society," he continued. "If such persons do not pay, either someone else does or the state borrows money and relies on its creditors.

"Hence, our national sovereignty is reduced because some do not pay their taxes."