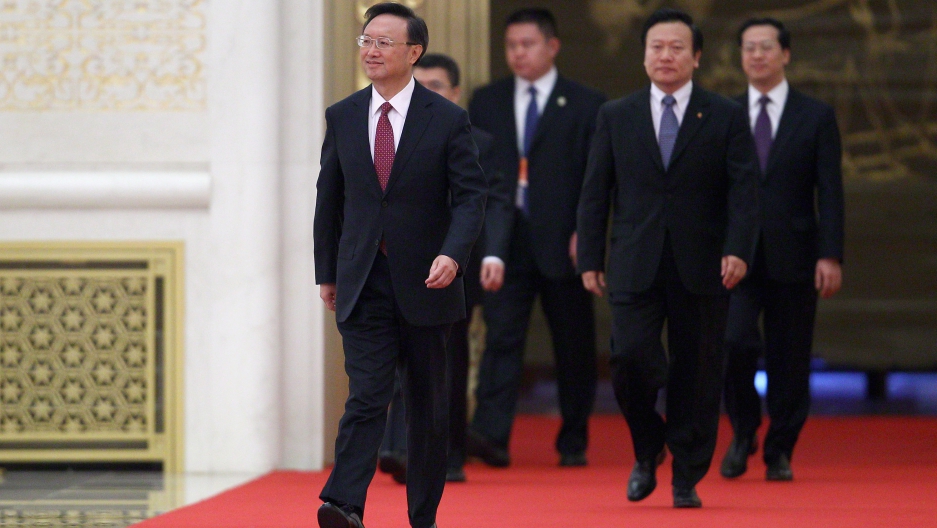 TAIPEI, Taiwan — The nearly $6 billion arms deal the U.S. signed with Taiwan last week is rippling across the Taiwan Strait and roiling the waters of U.S.-China relations.

One sign of China’s displeasure with the deal came when Foreign Minister Yang Jiechi pulled Secretary of State Hillary Clinton aside at the United Nations General Assembly on Monday to reiterate China’s strong opposition. The U.S. will provide Taiwan $5.9 billion in weapons as well as spare parts and training to upgrade its fleet of F-16 fighter jets.

Yang reportedly has demanded that the United States reconsider its decision.

And if the United States fails to do that, China is sending signals it will suspend a series of U.S.-China joint military exercises, which had been carefully choreographed by both countries as a way to keep cross-Strait tensions from flaring.

A senior U.S. official, who was quoted in a briefing transcript on the State Department’s website, said, “They have indicated that they are going to suspend or to cancel or postpone a series of military-to-military engagements.”

That statement was front page news here Wednesday with a banner headline in the Taiwan News: “China asks U.S. to reconsider decision on Taiwan.”

And just like that, cross-Strait tensions are once again on the rise and policy experts on the issue are concerned.

A former director of the China division of the State Department Bureau of Statistics and Research and now an international affairs professor at George Washington University, Sutter addressed the situation in a speech and panel discussion at the International Press Institute gathering in Taipei earlier this week.

He hopes all sides would “recognize the importance of continuing to improve cross-Strait relations.”

“No one would want to see things return to the negative experiences all three sides experienced before,” he added, referring to the tension that was felt under former Taiwan leader Chen Shui-bian’s between 2000 and 2008.

In an email from Washington Thursday after the panel discussion, Sutter said that the politics of the issue were also playing out inside the Beltway, where the arms deal, because it refurbishes the planes but does not provide new ones, is being criticized by Republicans as "capitulation" to China.

"There are complaints in China and Taiwan, but the more vocal complaints seem to be in the U.S. The political atmosphere in DC is very partisan, so any presidential decision can be a target ... Since the Taiwan president has expressed his appreciation for the sale, it's hard to argue that the US is abandoing Taiwan. I thnk the US criticism will subside."

Although mainland China has never ruled Taiwan, the People’s Republic of China claims the island nation as its territory. China openly calls for Taiwan to unify with China and has threatened to use military force if necessary to achieve its goals.

Under a congressional mandate, the U.S. is required to provide military aid for Taiwan to allow the tiny country of 20 million to defend itself against China. But the U.S. has also signed to China that it would reduce arms sales over time.

As the recent arms deal dramatically illustrates, the two promises are contradictory and so the U.S. might soon find itself in a dangerous rip tide.

And the plucky island nation of Taiwan, with a thriving democracy, a free press and an aggressively capitalistic society that takes great pride in its standing in the world can often allow itself to be consumed with fear by in the imposing shadow of China.

The U.S. arms deal is something of a climbdown because it is centered on plans to refurbish the F-16s rather than a more ambitious plan to buy new planes, which has been put on hold.

But still the deal has clearly caused the ire of China and some diplomats say the decision to go forward with it may prove to be ill-timed and clumsy.

Clinton was asked by reporters about the disapproval of the arms package expressed by China’s foreign minister. And according to reports widely published in newspapers here, a senior U.S. State Department official told reporters in a briefing, “Secretary Clinton responded very clearly that the United States had a strategic interest in the maintenance of peace and stability across the Taiwan Strait.”

The argument in support of U.S. arms deals to Taiwan has always been that a strong defense gives Taiwan the confidence it needs to be able to reach out diplomatically to China.

The hope in diplomatic circles here is that this proves to be true and the waters grow calm once again.

In Taiwan where the political season is getting underway, the distraction of a presidential election scheduled for early next year may indeed help to shift the focus away from fears of China imposing its longstanding threat to force Taiwan to unify with the mainland.

Chi Su, the former Secretary General of Taiwan’s National Security Council who is now senior adviser to Ying-jeou Ma, the current President of the Republic of China (Taiwan,) sits at the nexus of politics and diplomacy.

As he put it, “We’re in the middle of an election here. So what’s going on with cross-Strait relations is on hold. No one can predict with any certainty what will happen.”

(Charles M. Sennott is GlobalPost’s Executive Editor and co-founder. He blogs at GroundTruth and writes a regular column for GlobalPost.)