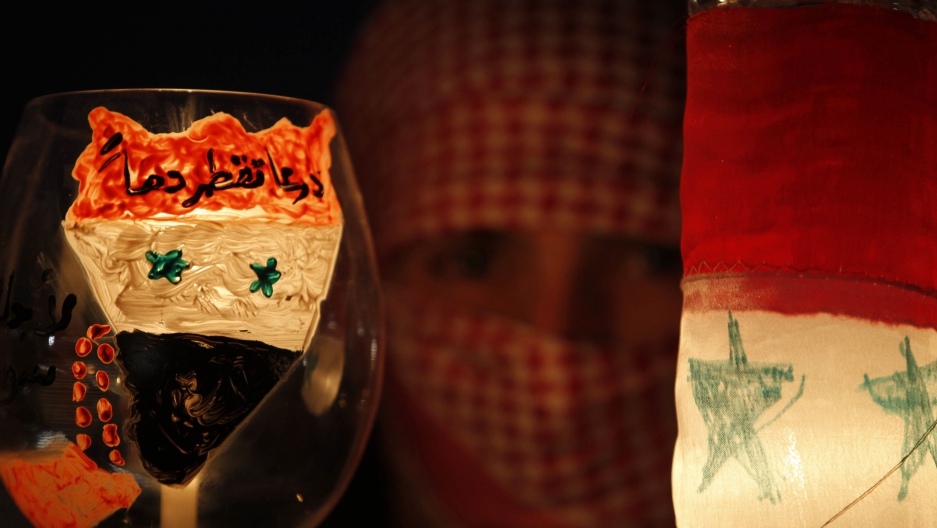 Syrians living in Jordan hold candles during a protest in front of Syrian Embassy in Amman on April 9, 2011 as they protest against Syrian President Bashar Assad's government and the Baath Party, following street violence and a growing number of dead and injured across Syria.
Credit: Khalil Mazraawi
Share

In the second of a two-part series on the decline of the Syrian economy since the pro-democracy uprising and the subsequent crackdown began, GlobalPost looks at President Bashar al-Assad’s efforts to stabilize the economy amid Western sanctions and whether it will hold up over the coming months.

BEIRUT, Lebanon — After six months of attempting to crush a democratic uprising, the Syrian government is starting to feel the economic strain from sanctions and a ban on oil exports.

From Syria: The cost of repression

“There are no positive assessments,” one Syrian businessman in Damascus told GlobalPost. “Some say things can get by another three to six months, but after the first quarter of 2012, the economy can only go one way.”

In late August, Adib Mayaleh, Syria’s Central Bank governor, told Bloomberg that $2 billion had been spent defending the Syrian pound since the start of the uprising in mid-March, out of a fund designated for that purpose totalling $5 billion.

Mayaleh said the local currency had lost just 3 percent against the dollar during the same period. Independent analysts put the real inflation on the Syrian pound since the uprising at between 10 to 17 percent.

Mohammed Khaled, a wealthy importer from Homs who serviced government contracts, and now works in exile for the opposition, said the Central Bank had been able to maintain an official rate of 47 pounds to the dollar only through significant hard-currency injections by regime stalwarts.

Chief among these, said Khaled, is Rami Makhlouf, first cousin of President Assad and a man who became Syria’s wealthiest businessman under Assad’s 11-year rule. Khaled said that Makhlouf took $3 billion to the Central Bank in mid-May, as the Syrian pound was dropping in value.

A Western diplomat in Damascus who follows the economy confirmed hearing reports of this account, adding that Makhlouf had also pressured leading Syrian businessmen to do the same.

Still, the cost of keeping inflation at bay for six months has clearly begun to take its toll on Syria’s finances.

On Sept. 24, the government announced a ban on imports of all goods carrying a tariff over 5 percent, a move the minister of economy and trade acknowledged was aimed at “preserving foreign reserves,” which most economists put at between $17 billion and $18 billion.

The ban, which affected foreign consumer goods and cars but not raw materials and foodstuffs, was a dramatic reversal of Assad’s policy to open up Syria’s economy after decades of a Soviet-style ban on imports.

The move left many Syrian businessmen — who make their money importing goods for retail, manufacture or re-export — stranded.

Average prices rose by 30 percent on nearly all imported consumer goods, according to residents of Damascus.

Coffee and flour shot up by 50 percent. The price of heating oil, on which Syrians will rely in the coming winter to heat their homes, is also set to spike.

“Syria is in more trouble than its officials would like to admit,” wrote Syrian political analyst Sami Moubayed.

The import ban, he said, will drive a “permanent wedge” between the government and the business elite, which until now had backed the regime because they had flourished under Assad’s pro-business policies.

In an unusually critical public move, Aleppo's Chamber of Industry said in a statement the import ban would “inflict extreme damage on the national economy” and undermine the competitiveness of local industry.

Shortly afterward, the regime announced a 50 percent increase in its budget for 2012, worrying some analysts that it will begin printing money to cover costs, further spiking inflation.

Critical to the declining fortunes of Syria’s economy, say most analysts, has been the imposition of an escalating series of U.S. and European sanctions against regime officials and businessmen supporting them, as well as an embargo on the import of Syrian crude oil.

With bilateral trade already heavily sanctioned under the 2004 Bush administration Syria Accountability Act, President Barack Obama has widened U.S. trade and travel sanctions and asset freezes to include Assad, his inner circle and dozens of leading Syrian businessmen and entities close to the regime.

The EU has followed suit, imposing sanctions against 50 people and nine entities in Syria and, after much deliberation, followed the U.S. in banning the import of Syrian crude oil which in 2010 accounted for some $4.6 billion in earnings for the regime, according to the European Commission.

The ban means major European oil firms in Syria such as Total, Royal Dutch Shell and Gulfsands, cannot expand their existing operations, but the diplomat said many firms had already reduced extraction. Shell had, in late September, stopped production in Syria altogether, according to the New York Times.

Syria produces about 400,000 barrels of oil a day, formerly exporting up to 90 percent of about 150,000 barrels per day mostly to the Netherlands, Italy, France and Spain.

While small on a global scale, analysts and activists say the exports bring in millions of dollars a day to Assad's government, accounting for perhaps 30 percent of its income.

With Maersk and other tankers no longer sailing from the Syrian coast to European ports, the Assad government was forced to turn east to find new buyers in Asia for its heavy crude, facing the prospect of increased shipping costs and forced sales at discounted rates, as customers looked to take advantage of the political situation to get a cheap deal.

With the regime no longer able to deal in dollars due to U.S. sanctions and with MasterCard and Visa no longer working in Syria, businessmen in Damascus reported a palpable sense of growing isolation.

“It feels really restricted here now,” said the Syrian businessman. “I can’t use any of my international cards and I can hardly leave Damascus. It might be all psychological, but it impacts the way you view the Syrian economy. Some of my biggest clients just don’t travel here anymore.”

Diplomats, businessmen and analysts agree that the last to feel any of the economic pain in Syria will be the security forces on whose brutal suppression of pro-democracy protests the Assad regime has relied to maintain its grip on power.

Plainclothes security forces now receive daily cash bonuses to keep them motivated as they kill and torture protesters, they said.

Shabiha, the ultra-loyal pro-Assad thugs who opposition activists estimate number in the tens of thousands, are reported to earn the most, receiving daily bonuses between $30 and $100 for each operation. They can earn up to $5,000 a month, according to opposition figure Habib Saleh who has studied the shabiha, a staggering sum in a country where the average salary is $200.

With such financial incentives, few see Assad’s plainclothes security forces crumbling any time soon, even as the economy continues to hurt ordinary people.

“In the coming three months investor confidence will weaken further,” said Khaled. “But normal people are patient. They say we have a goal we want to reach and we have already paid a price in blood. We don’t have a problem paying for it now in money.”

The fear, said a Western diplomat, is that while the opposition remains divided and without a clear political platform, the regime will be able to convince most Syrians that the pain in their pockets is the fault of foreign powers, and that only the Assad system can deliver stability amid the chaos.

“If the government does an effective propaganda on making it all about external interference, it’s no given that the economy will be the thing to bring down the regime,” said the diplomat.

“If there is no credible opposition alternative, people will chose to believe the regime and hunker down and weather the storm.”