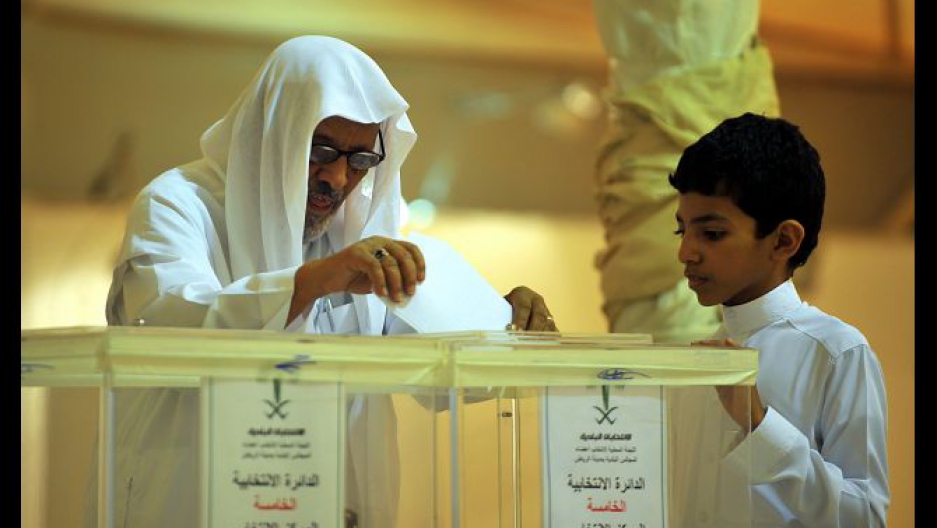 A Saudi man casts his ballot at a polling station in Riyadh on September 29, 2011 as Saudi men were voting in municipal elections. The turnout was poor in the last all-male vote in the kingdom after King Abdullah this week gave women the right to participate in 2015.
Credit: Fayez Nureldine/
Share

Five years ago, Saudi Arabia’s Grand Mufti, Abdul Aziz Aal Al Sheikh, was asked his opinion about women participating in the kingdom’s top advisory council, the majlis al shoura. The Islamic scholar replied that this idea, as well as suggestions of equality between men and women, were “plots of the enemies” of Islam who seek to destroy the faith.

But now, the elderly cleric apparently has had a change of heart.

On Sunday, King Abdullah bin Abdul Aziz announced that he intends to appoint women as members of the majlis, pointedly noted that he was acting “after consultations with many of our [religious] scholars, especially those in the Senior Council of Scholars” chaired by Aal Al Sheikh.

This turn of events is yet another illustration of the dynamics at work in the centuries-old alliance between the Saudi ruling family and the kingdom’s ultraconservative religious establishment: That it is the princes, not the clerics, who have final say in controversial issues.

But not everyone in that religious establishment, which still has wide influence — including within the judicial system — was ready to concede to the king’s potentially historic decision.

Two days after his speech, a judge in the coastal city of Jeddah ordered a woman who had defied the country’s ban on female drivers to be given ten lashes for driving her car. It was the harshest action so far taken against the scores of women who have taken to the wheel since June in a campaign against the ban. Coming so close to the king’s unprecedented remarks Sunday, it could only be read as a display of dissent.

The king did not waste any time putting down this challenge and on Wednesday, he vacated the sentence — an action that many observers had expected. “I was 100 percent sure she would not be lashed, especially at this time,” said Rasha Al Duwaisi, a Saudi activist and supporter of the driving campaign. Otherwise, she added, “it would be a huge blow to the reputation of the country.”

This raises the question of why the king chose to accord women the same political opportunities as men, limited though they are, instead of lifting the ban on female drivers. One answer could be that allowing women to drive would have an immediate, tangible and dramatic effect on daily life in the kingdom, perhaps inciting an intense backlash from religious conservatives.

But the moves announced by the king Sunday — which also included the promise that women would be able to run as candidates and vote in the next election for municipal councils in 2015 — will take years to implement, giving conservatives time to get used to the change. Appointing women to the majlis will happen in 18 months.

The king and others in the progressive faction of the ruling family are aware that getting too far ahead of their conservative constituencies could jeopardize their long-term alliance with the religious establishment, which gives the family political legitimacy.

So while reforms must come, conservatives must be slowly nudged along.

“Balanced modernization in line with our Islamic values, which preserve rights, is an important requirement in an era with no room for the weak and undecided people,” the king said in his address.

The Saudi king sought to disarm potential critics by saying that his decisions were rooted squarely within Islamic law, or sharia, and Islamic history. “All people know that Muslim women have had in the Islamic history, positions that cannot be marginalized, including correct opinions and advice since the era of Prophet Mohammed,” he said.

“He’s a brave king to say clearly that we are doing this in accordance with Islam as it was in the time of Prophet Muhammad,” said Mohammed Al Zulfa, a former member of the majlis and a long-time champion of greater freedoms for Saudi women. “He’s doing this in accordance with real Islam, as we know it, and real Islam is getting women’s rights and [letting them be] full members of society.”

However, some women also noted that the king said several times that their political participation will be “in accordance with the shari’a guidelines.” This phrase gives them pause because they read it as code words for maintaining the country’s strict gender segregation and the guardianship system, under which every woman must get a male relative’s formal permission to work, attend university, or travel. If left unchanged, these would adversely affect how women participate in the majlis and in elections for city councils.

Implementation of the king’s announcement will be key, of course, for that will determine whether or not it is really the start of a new path for Saudi women or simply an empty promise.

Religious conservatives will be actively lobbying to restrict women’s role in these political bodies. Already, some have suggested that future female majlis members only participate via closed circuit television in order to observe gender segregation.

Saudi women themselves had mixed reactions to the news. Some were dismissive, saying that what the king has declared will have no immediate impact on their daily lives. Wajeha Al Huwaider, a prominent women’s rights activist in the Eastern Province, said her initial excitement waned when she learned that women won’t participate in council elections until four years from now and that women won’t join the majlis until the start of its next term.

Lifting the driving ban and ending the guardianship system would have made a bigger difference in women’s lives, she said, adding that the king’s promise is “not going to affect our life in a day, or in a year.”

But others were elated that--in theory at least--their equality with men in the political arena was formally recognized. “No matter what the reasons are...outside pressure, inside pressure, the Arab Spring...I’m sure all these things played a role in his decision,” said activist Al Duwaisi.
“It’s still historic,” she added. “This declaration at this time empowers women. It gives them confidence knowing that the king and the court support women’s voices and having a role in public life...it makes a huge difference.”

It’s another reason for Saudi women to like their king. “The women in Saudi Arabia have so much belief in King Abdullah,” said Khulood Al Fahad, 33, a businesswoman in the Eastern Province. "You cannot believe how much they love him."

(Caryle Murphy is a fellow at the Woodrow Wilson International Center for Scholars in Washington, DC. From 2009-2011 she was GlobalPost’s correspondent in Saudi Arabia.)

(This work was supported by a 2011 Knight Luce Fellowship for Reporting on Global Religion. The fellowship is a program of the University of Southern California's Knight Program in Media and Religion.)