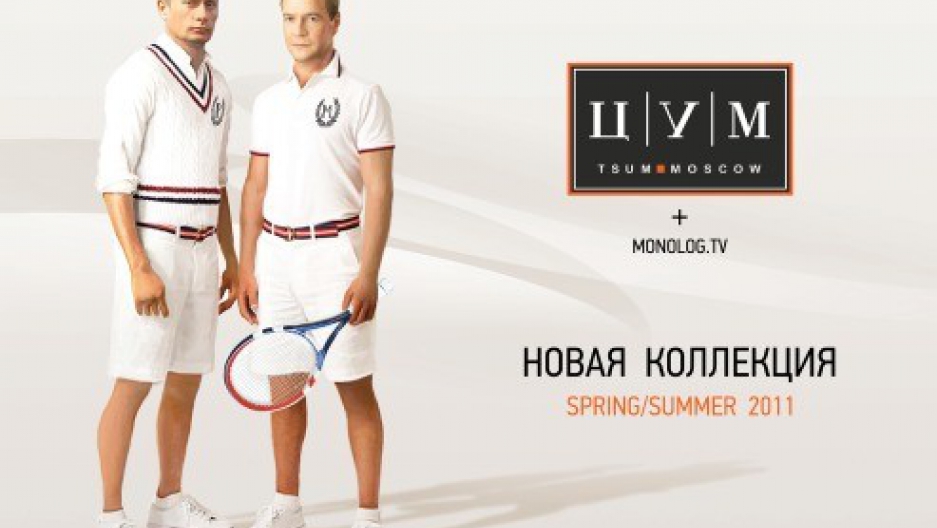 Putin and Medvedev portrayed as tennis partners in artwork meant to mock their political partnership. (Image courtesy of Monolog)

Recently, Russian president Dmitry Medvedev announced that Vladimir Putin would be United Russia's candidate next year, all but assuring him the presidency — possibly until 2024. Many in Russia saw this coming, and the country’s artists have been pioneering new forms of risky, highly public dissent.

Anna Nemtsova, Moscow correspondent for Newsweek and the Daily Beast, has been following the growing movement of street artists. Voina ("War"), a collective from St. Petersburg, is responsible for some of the most daring art actions. "They declared a war," Nemtsova tells Kurt Andersen, “to state corruption, injustice, and the political regime."

It’s not high art. Voina’s actions (and the videos of them posted online) are designed only to mock and humiliate the Russian political class as humorously as possible, much like the illegal billboards of the collective Monolog. Last year Voina painted a 210-foot phallus on a drawbridge facing the Federal Security Bureau, the former KGB. Because of this and other actions (some of them truly Not Safe for Work), they remain underground to avoid arrest. But at the same time, the ministry of culture awarded Voina an art prize for their rude graffiti. "It's a very interesting phenomenon we have in Russia," Nemtsova says. "One hand is giving the prize, the other hand is punishing."

View a slideshow of the art mentioned above on the Studio 360 website.