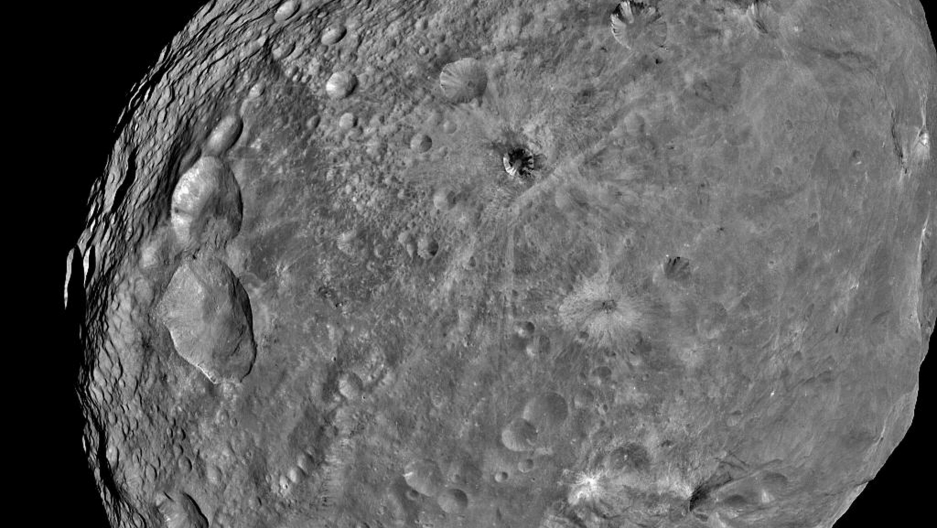 The giant asteroid Vesta is seen in an image taken from the NASA Dawn spacecraft about 3,200 miles above the surface on July 24, 2011.
Credit: NASA/JPL-Caltec via
Share

The most accurate asteroid survey ever performed has revealed that there are fewer “planet-busting” asteroids near Earth than previously thought, NASA said on Thursday.

In a press conference to announce the findings of NASA's NEOWISE sky-mapping project, NASA scientists said they now estimate there are only about 19,500 midsized asteroids – between 330 feet and 3,300 feet wide – near Earth, down from 35,000, The Associated Press reports. They said there are 981 large asteroids – rocks about the size of a mountain – near the planet, also fewer than previously thought.

According to PC Magazine:

NEOWISE is part the Wide-field Infrared Survey Explorer (WISE) mission, which launched in December 2009. It was intended to survey the skies for small bodies, asteroids, and comets using infrared light, and it managed to find 20 comets, more than 33,000 asteroids in the main belt between Mars and Jupiter, and 134 near-Earth objects (NEOs). In October 2010, the spacecraft ran out of the coolant needed to keep its instruments cold, but two of its four cameras remained operational. As a result, NASA extended the mission for four months for a segment known as NEOWISE in order to hunt for more asteroids and comets. In all, the WISE mission captured 2.7 million images of space objects, which helped researchers reach their conclusions about asteroids revealed today.

"The risk of a really large asteroid impacting the Earth before we could find and warn of it has been substantially reduced," Tim Spahr, the director of the Minor Planet Center at the Harvard Smithsonian Center for Astrophysics in Cambridge, Mass., told SPACE.com.

Early warning is important since the impact of even a mid-size asteroid would be catastrophic.

"It is quite a large area that would be damaged by the impact of a hundred-meter object, something on the order of a metropolitan area,” explained Near-Earth Object program executive Lindley Johnson, CBS News reports. “If, say, one were to hit in the middle of the (Washington) D.C. area, it would pretty much devastate the entire area within the Beltway.”