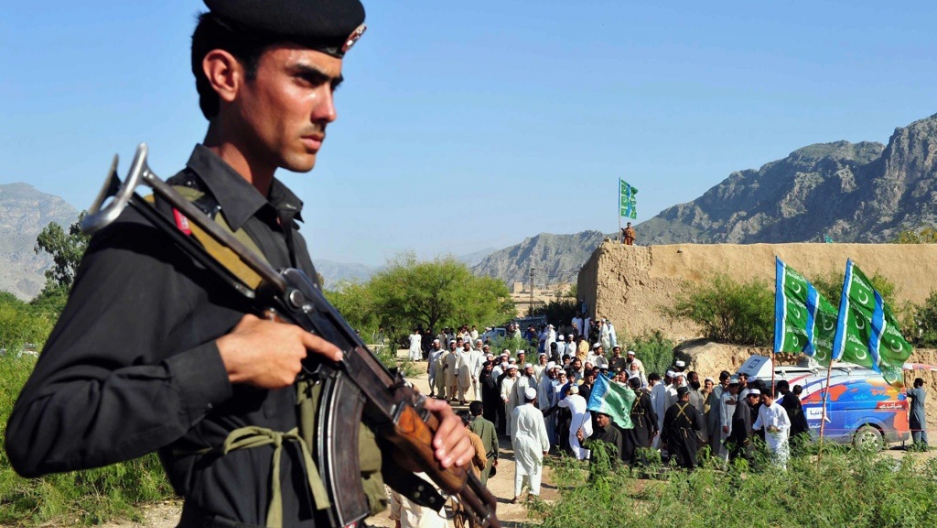 A Pakistani security member stands guard near the border with Afghanistan on Sept. 27, 2011.
Credit: A. Majeed
Share

RAWALPINDI, Pakistan — The Haqqani network, accused of a long line of spectacular attacks in Afghanistan, including the recent 20-hour siege of the U.S. embassy in Kabul, is Afghanistan’s problem, not Pakistan’s, said Maj. Gen. Athar Abbas, Pakistan’s military spokesperson, in an interview with GlobalPost.

Abbas was responding to a string of strikingly blunt comments by Adm. Mike Mullen, the chairman of the Joint Chiefs of Staff, in which he directly blamed the Pakistani government for the attack on the U.S. embassy.

While U.S. authorities held the Haqqani network responsible for the attack, Mullen said that it got support from Pakistan’s main spy agency, the Inter-Services Intelligence Agency. In front of a U.S. Senate committee, Mullen went so far as to call the Haqqani network, which has pledged allegiance to the Afghan Taliban leader Mullah Omar, a “veritable arm” of Pakistani’s spy agency.

Afghanistan: Kabul attack shatters what little faith there was in the country's security

The Pakistani military spokesperson admitted that Pakistan maintains contact with the Haqqanis, but said it was a strategic relationship aimed at helping to stabilize its war-torn neighbor, not to attack it.

“Everybody has a link with the Haqqani network. What kind of intelligence world are you operating in if you shut all doors? But how do you use that contact? Are you using that contact to destabilize Afghanistan or to play a positive role? That may matter,” Abbas said.

The United States itself, in fact, once kept a link with the Haqqani network. The C.I.A., just like the Pakistani and Saudi Arabian intelligence agencies, heavily supported Jalaluddin Haqqani, who founded the group, in the 1980s, supplying him and his fighters with weapons to fight against the Soviet occupation of Afghanistan.

Haqqani was born in the Afghan province Paktika. His son, Sirajuddin, now leads the network.

Abbas rejected the idea that Pakistan should be held responsible for the attacks on Kabul by the Haqqanis. He said he believed the militant network was based in Afghanistan and that, even if it was operating from Pakistan's tribal areas along the border, the militants would have to travel some 200 kilometers to reach Kabul, meaning that Afghan authorities would share responsibility for not stopping them.

“There is a long way to go to Kabul. There must be a support system somewhere at places in-between. To act against that is their responsibility. We are taking our responsibility,” he said, referring to military operations being carried out in North and South Waziristan, a semi-lawless region that borders Afghanistan.

More: Belittling both US and China, Pakistan finds its diplomatic stride

The Haqqani network primarily operates from the Afghan provinces of Paktika and Khost, he said. But Syed Irfan Ashraf, a Peshawar-based analyst, wondered how the government can verify such a claim since parts of North Waziristan is out of reach, even for the army.

“Parts of the border area are open to the Haqqanis. They can be in Pakistan or in Afghanistan at certain times,” Ashraf said.

Abbas admitted that a part of North Waziristan is a no-go area for the Pakistani army, and that there are a number of militant groups based there.

“There are some elements which are present there. They are close to the border which is inaccessible,” Abbas said, referring to the militants as “elements,” but emphasized they are not part of the Haqqani network.

The U.S. authorities have never given proof that the group attacking Kabul has been in contact with people in North Waziristan, Abbas said.

“They have been informing us that such and such group was behind the attacks, but no evidence of such,” he said. “Unless, and until, we are provided some concrete thing you can’t really go and act against these people.”

As for the Afghan authorities, Abbas asked why, if they felt Haqqani was operating from North Waziristan, they continued to allow their mobile phone towers to reach the area. Pakistan has, since 2009, switched off its mobile network in North and South Waziristan to hamper communication between militants there.

“Whoever is present at this side of the border takes advantage of this, because you only have to buy a Afghan sim card and get it activated. If the Afghan authorities find that militants are facilitating each other from across the border then why don’t they shut down the towers like we did?” Abbas asked, adding that he raised the issue a number of times with his Afghan counterparts without success.

This worries Ashraf, the Peshawar-based analyst.

“All the phones that I am attending from the militant side are Afghan, while they claim they are in Pakistan. I am worried about why they have been provided with this communication. The immaculate execution of attacks is only possible with a good communication network,” he said.

He pointed to an attempt by Pakistan to establish a biometric system that checks all people crossing the border in Chamman, a busy border town, and fencing parts of the border. Four years ago Pakistan’s effort stranded after Afghan authorities objected. Only 35 kilometer of the border is now fenced at some crossings.

Some analysts called the effort futile, considering that the rugged border is 2,640 kilometers long and has numerous known and lesser known crossing points. But Abbas said it would have been possible and would have helped to contain cross-border movement.

“Nothing would please Pakistan more if the border is sealed,” he said.