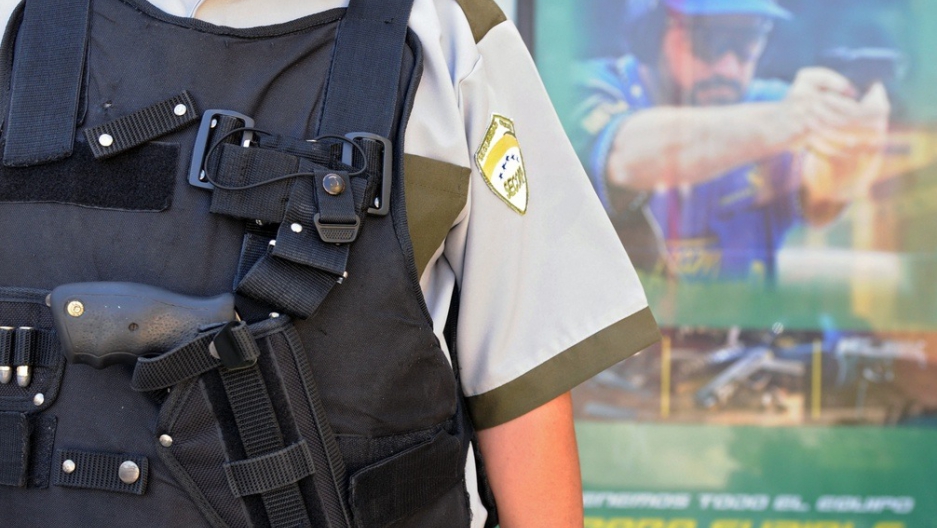 SAN JOSE, Costa Rica — Gerardo Beita knows he runs the most eye-grabbing shop on the block.

Motosport's showroom in the gritty downtown of this Central American capital displays shiny four-wheelers, motorbikes and choppers of all kinds and colors.

It's eye candy for passersby — and potential thieves.

A uniformed security guard waits by the door with a half-smile and a handgun at his waist, greeting and eyeballing customers as they enter the store.

Travel up Central America to visit the chain's other Motosports shops, Beita said, and you will see the showroom security guards get more numerous and the guns get bigger.

More from Costa Rica: No longer a happy place?

“We've spent a lot on security, but still you're always waiting for something bad to happen,” he said, citing a security price tag of as much as $40,000 each year for the San Jose showroom alone.

Such surveillance measures are burdens that managers say they must now shoulder in Central America, where gangs are staging hostile takeovers of territory and hurting the region’s nascent global competitiveness.

Costa Rica is among four countries in the region whose ranking slipped this year in the Global Competitiveness Report put out annually by the World Economic Forum. Their fall came just as other emerging markets, including several Latin American ones, climbed the ranks, suggesting Central America could be losing out at a critical moment when the so-called developing world is reaping gains.

“The competitiveness of most Central American countries is diminishing. Security, or insecurity rather, is one of the leading causes of this situation,” said Ronald Arce, a researcher at Costa Rica’s INCAE Business School who contributed to the report. “Central America is one of the most violent regions, for a region that’s not at war.”

But its neighbors have been in battle mode. Colombia for decades has scuffled with drug-funded rebel groups and Mexico, since 2006, has waged a bloody war on drug cartels.

Both nations’ entangled narco industries reach tentacles out to each country in this isthmus, which is smaller than Texas.

Speaking in September at the United Nations, Costa Rican President Laura Chinchilla summed up Central America’s dilemma: “Being situated between the big drug production centers and the leading consumer in the world (the United States), we’ve become a target for the dynamics of death that both of these create, and we must assume exponential material, institutional and human costs.”

A World Bank report said violent crime costs Central America about 8 percent of the region’s gross domestic product — in both public and private crime-related security and health-care expenses — and could drag down future economic growth.

Much of that is spent on surveillance systems and guards to take the place of police, who are often understaffed and mistrusted in the region.

The Small Arms Survey, a Swiss-based research group, reported that Guatemala has some 944 private security guards per 100,000 people, among the highest rates in the world. Honduras is close with 870 per 100,000.

Carolina Castellanos, executive director of the Guatemala-American Chamber of Commerce, has noticed a strain on investment. She said this year she could not organize a single trade mission visit from the United States, whereas in the past the association hosted three or four each year.

First that seemed recession-related, she said, but firms have begun blaming both the U.S. economy and Guatemalan violence when declining an invite.

Businesses take risks operating in Guatemala and its neighbors El Salvador and Honduras, she said, where they must deal with extortion and carjacking by gangs.

“We did an informal survey with our members and they were spending an average of 10 percent of their annual budget on security, which is very high, and that hindered them from creating more jobs or expanding or investing,” Castellanos said.

Central American countries’ performance in these categories varied, but they almost all invariably fell down the ranks, which is scaled from one, the most competitive, to 142.

Nicaragua, Central America's poorest country, fell from 112 to 115 but unlike its neighbors it suffered not from crime and theft but bureaucracy and corruption, according to the World Economic Forum.

Honduras rose slightly from 91 to 86 but analysts said it only rebounded from losses after the 2009 coup.

Fast-growing Panama bucked the trend, climbing from 53 to 49 on solid infrastructural and technological progress and an efficient financial market, the report said.

And Mexico, Peru, Bolivia, Brazil, Ecuador, Argentina and Uruguay — as well as emerging markets in Asia — each improved their global competitiveness ranking this year.

The U.S. Senate Caucus on International Narcotics Control released a report urging the government to take action to help this region thwart cartels and presented a bill to combat organized crime.

The northern Central American leaders have pledged to fight the cartels with an iron fist, and ordered the military into the streets. Governments have proposed anti-crime taxes to ramp up the crackdown. But the business elites don’t approve.

“One must be little aware of the difficult economic reality and insecurity in which we Central Americans live to state that, in the middle of this crisis, it is convenient to raise or create taxes, above all when it’s the productive sectors that keep emerging economies afloat during a crisis,” a regional federation of commercial associations said in a statement in response to a security tax.