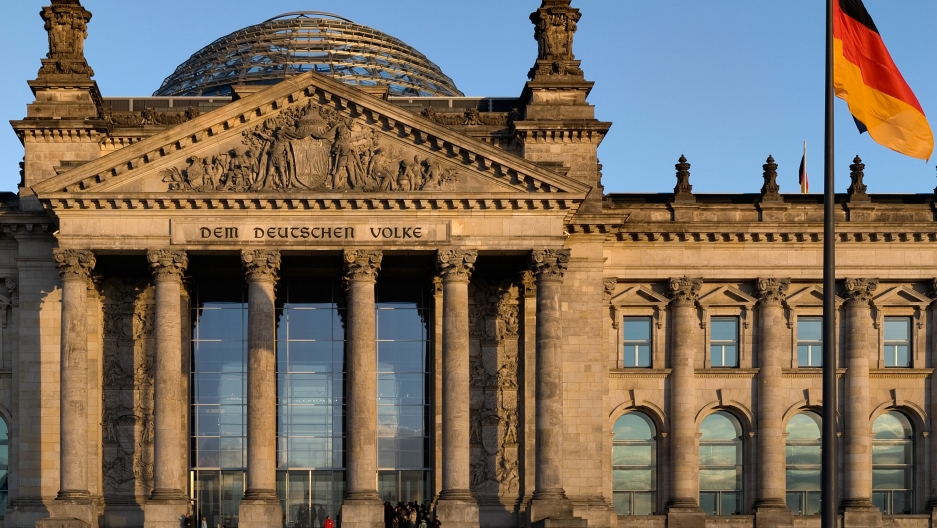 Share
European officials paid a visit to Greece on Thursday to determine if the Greeks have made enough budget cuts to get the next promised cash infusion – some 10 billion dollars. Those officials were met with protests in the streets of Athens. Meanwhile, in Germany, lawmakers gave a resounding thumbs-up to adding more money to a fund designed to keep Greece's debt problems from spreading across the 17-member eurozone. Eurozone leaders agreed back in July to expand the bailout fund to more than $500 billion. But their national parliaments still had to approve it. German lawmakers endorsed the agreement by a wide margin today, though it was clear that not all were happy about it. Before the vote, opposition politician Peer SteinbrÃ¼ck criticized the way Chancellor Angela Merkel's government has handled the crisis. He said that Merkel's "medicine" to stave off the Greek crisis with loans and austerity measures had "failed." He said the loans were just a placebo, and the austerity programs were becoming life-threatening to the Greeks. Still, he said he would vote for the measure because of Germany's "greater responsibility" to the eurozone. As Europe's largest economy, Germany would contribute close to $300 billion to the fund. One Berliner, who didn't give his name, told the BBC he wondered where Germany's responsibility will end. "I get the feeling that they don't really have a concept of what they're doing with the money, just pumping more and more money into it and they don't even know why or what to do," he said. In the decades after World War II, Germany paid bills for Europe out of a kind of war-guilt, according to Johan Van Overtveldt, author of the forthcoming book, The End of the Euro. But he said that attitude is starting to wane. "The Germans are not prepared to pay any kind of bill that comes along, and they want to have stringent conditions attached to do that," Van Overtveldt said. "I think it's quite reasonable, but to the European classical thinking of the last decade, it's a shock, because suddenly these Germans don't want to pay the bills anymore." It's a big change, too, for a country that was so instrumental in setting up the euro in the first place. Sebastian Borger, who writes for the German edition of the Financial Times, said former Chancellor Helmut Kohl gave Germans few chances to say no. "We never had a referendum on the euro. It was imposed upon us by the imposing figure of Chancellor Kohl, for very good reasons, no doubt about it. But we've never had an open debate about it," Borger said. "I think if you had an open debate, and Angela Merkel isn't very good at that, you could convince people that there is a lot of good stuff coming out of the euro for Germans beside all the trouble." There may be signs that Merkel may have more convincing to do. Many analysts now say that not even half a trillion dollars will be enough to keep Greece's problems from spreading, and to prop up Europe's banks. That means Germany will probably have to come up with a lot more money. Louise Cooper, an analyst at BGC partners in London, said that puts more pressure on Angela Merkel. The question for Merkel, she said is whether she has the "political authority to take all the future steps that need to be taken to solve the eurozone crisis, to actually write the big checks that are required to save the eurozone." Several other eurozone countries haven't even weighed in yet on this bailout measure. Slovakia, for one, is not scheduled to vote on it until the end of October.