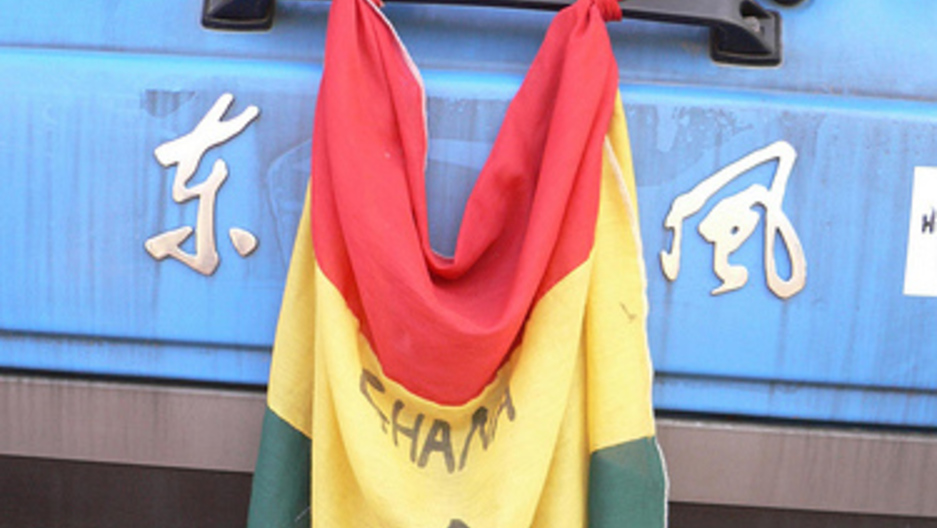 China's investment in Africa is vast and growing. In Zambia, it has cropped up as a campaign issue. The newly elected President Michael Sata was once so critical of China's approach to investment in Zambia that the Chinese government threatened to pull out its investments if he were ever elected.

Now that he's president, he's sounding a little more pragmatic, but Zambians are watching to see if Sata makes good on his pledge to get them and their country a fairer shake from foreign investors.

Not far from Lusaka's top luxury hotels are the shacks and dirt roads of Kalingalinga, a shantytown where many homes don't have water, and many people don't have jobs.

One who does, Josephine Banda, works in a small bridal shop. She's following the first days of Zambia's new government, with interest.

"I believe this is a new season, not just for the new president, but for all Zambians," Banda said. She'd like him to see the president provide better health care and better schools. "There are no books, there are no desks. Children are sitting on floors. They don't have anywhere to write. So I believe, if he tackles that area, all will be well."

But that's not all Josephine is interested in. Her brother works in a Chinese-run copper mine, and she'd like the president to get tough on Chinese investors.

"When I look at the mines, I don't see any help they are giving to the Zambians," Banda said. "All the miners are complaining the labor is too hard for them, and the money they are getting is too little."

Out the street, a man named Robbie runs a makeshift clothes shop, with racks out on dusty ground and shoulder bags hung on nails on the side of a building. He's fairly positive about Chinese investment in Zambia.

"Chinese bring development here in Zambia," he told me. "Chinese are giving some people jobs."

They gave him a construction job, which he did for six months. He said he was treated fine, but he only made about a $1 a day, not a living wage here. With his shop, he said, he earns six times that.

Too Many Chinese Workers?

Then there's the perception that Chinese companies bring too many Chinese workers with them when they come to Zambia. In a hardware store, I met a vegetable farmer named Mwaba Frederick Konie.

President Michael Sata knows that the people who just elected him are asking these questions and more, for instance, why Chinese companies and other foreign investors don't pay more tax, including on the copper they extract. So when Sata met with the Chinese ambassador this week – his first meeting as president with a diplomat – he was pointed in his comments.

"We welcome your investment, but your investment should benefit the Zambians," Sata said. "Both of us must benefit. It must not be just a one-way traffic."

He added that Chinese companies must also follow local laws, including a law that limits how many foreign workers can be brought in, how much local workers are paid and how they're treated.

Chinese Ambassador Zhou Yuxiao told President Sata in their meeting that Chinese companies should always follow the law of the land, and should be held accountable if they don't.

Later, he told me he thinks Chinese companies get unfairly singled out for criticism in Zambia.

"I've been working in many African countries," the ambassador said, "But the companies [in Zambia] are portrayed in a worse way – maybe not so much because of the performance of the Chinese company, but mainly because of the political setting here."

He was referring to the fact that in Zambia, China was used as an issue in the elections. But he acknowledged that there's room for improvement in how Chinese companies do business in Zambia.

A couple of Chinese coal mine managers shooting and wounding 13 of their workers last year, for instance, didn't do wonders for China's image in Zambia. And many Zambians complain that their previous government, over more than two decades in power, developed a cozy relationship with China, with sweetheart deals, kickbacks and opaque bidding procedures.

At a popular strip-mall, a pastor named King Ezekiel Mwape, sitting at a picnic table, bible at hand, takes a break from writing a sermon to cite one deal he knows of — a $53 million loan from China for mobile hospitals Zambia doesn't need, with a closed bidding process awarding the deal to a Chinese company with no known experience in mobile hospitals.

"Let's be serious, here. Let's be realistic. Most of the roads here are impassable. Then how do you buy cars, where, as well as the roads, they are in a bad state?"

He went on to say, "Instead of rehabilitating and improving current infrastructure, which is already bad, they go and acquire more things that are straining the whole budget. So I think that was very unfair for us."

He pointed out this was a loan that the Zambian people will be paying it back — with interest.