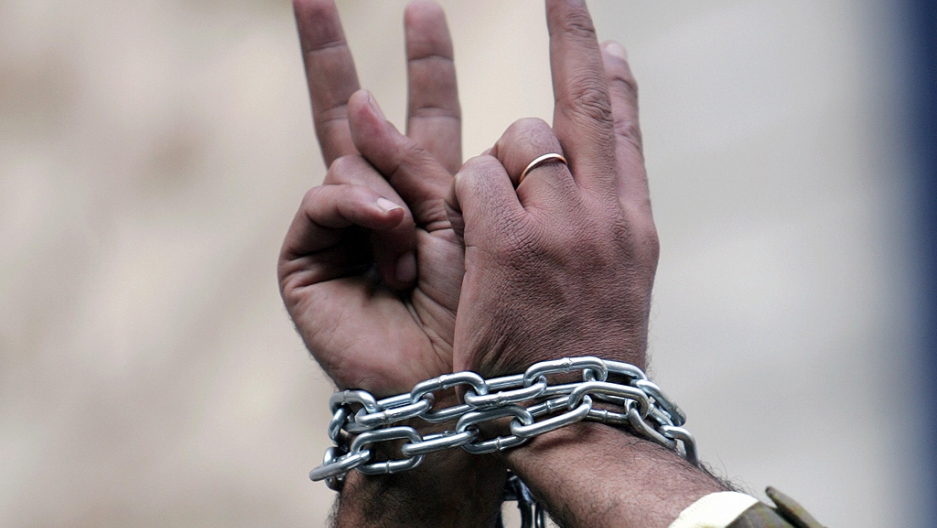 An Egyptian human right activist with chained hands gives the V-sign for victory during a protest against torture in police stations in Cairo in 2007.
Credit: KHALED DESOUKI
Share

Egypt’s military-led transitional government launched an official investigation into a police torture video that surfaced on YouTube on Wednesday, according to local reports in Cairo.

The emergence of the video, which is believed to have been shot since the ouster of Mubarak in February, is only adding to some activists' fears that the their caretaker government has resorted to Mubarak-style tactics to control dissent on the streets.

In the video, Egyptian military and police officers can be seen slapping detainees. The security officials also use stun-guns to electrocute the prisoners.

In the video, three prisoners are shown in a room with twelve police and army officers. Two of the detainees are then slapped and electrocuted by the officers, with one officer repeatedly electrocuting them in the ears.  One of the prisoners was also humiliated by being repeatedly called ‘Shosho’, a woman’s name.

Here’s the AP’s take on the video:

The video circulating on social networking sites shows the two men being beaten while they are questioned about the source of guns and rifles seized from them in the northern Nile Delta province of Dakahliya. When they refused to answer, the detainees are repeatedly electrocuted on their ears and chins.

The full video can be viewed (with caution) below.

The clip, which was reportedly shot in Egypt’s northern Delta region, was posted by a human rights organization in Cairo seeking to prosecute public officials, according to the Daily News Egypt.

Egypt’s state media said that the officers in the video were attempting to “extract information” from the weapons smuggling detainees, reported Daily News Egypt.

Earlier this summer, an Egyptian military general admitted that some members of the army carried out forced virginity tests on female detainees arrested at a protest in March.