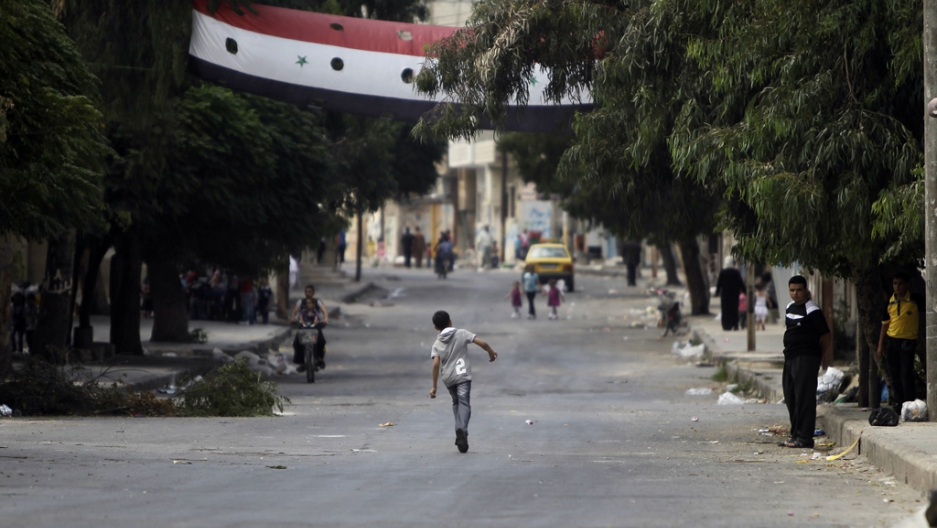 Syrian children play on the street in the flashpoint city of Homs, 160 kms northeast of Damascus, on August 30, 2011, as rights activists reported widespread anti-regime protests across Syria on the first day of the feast marking the end of Ramadan with massive security deployments in the central province of Homs and gunfire near the citadel of the city. AFP PHOTO/JOSEPH EID
Credit: JOSEPH EID
Share

At least 15 residents of Rastan and Talbeiseh in north-west Syria were left bleeding from the mouth and nose and with yellowing eyes after the regime used a farmers’ plane to spray pesticide chemicals on civilians for the first time today.

Two independent sources confirmed to Avaaz, the global campaign group which has a network of citizen journalists working in Syria, that a farm plane sprayed chemicals over areas of north-west Syria where troops and security forces are for second day battling defected soldiers supported by armed residents.

Abu Zainab, an Avaaz citizen journalist in nearby Homs, said activists had videos showing Rastan being hit with airstrikes by fighter jets but that electricity and phone line cuts meant they were not yet able to upload them. If confirmed, the videos would be the first reported case of the regime using its airforce against a protest center.

The news came as Syria's state-run news agency SANA and activists reported the death of engineer and university professor Aws Khalil who SANA said had been shot in the head by an "armed terrorist group" operating in Homs. Activists accused the regime of going after academics in an attempt to terrorize the city's rebellious population. Khalil is the fourth Syrian academic to be assassinated in Homs since Sunday.

Abu Zainab reported several new cases of defected soldiers in Homs itself, a city that has been a focus for large popular protests against the Assad family’s 41-year dictatorship and which has suffered repeated assaults by regime forces. Abu Jafar, a second Avaaz citizen journalist in Homs, reported that a sniper based over the Homs Grand Hotel shot professor Khalil near the Baath University, where he worked.