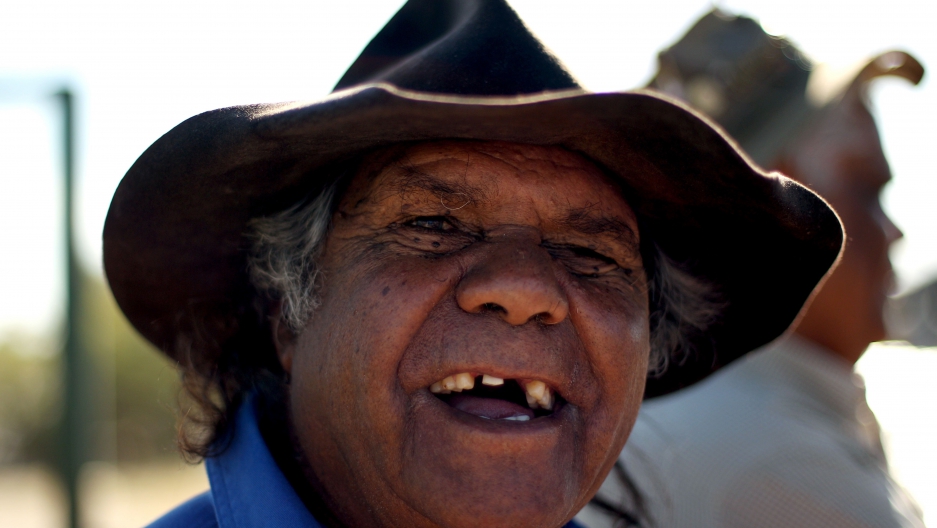 Jimmy Crombie laughs as he has his picture taken on March 29, 2011 in Birdsville, Australia.
Credit: Mark Kolbe
Share

A new survey indicates that despite their bounty of sunlight, humor and good fortune, Australians are a little on the gloomy side lately.

And here we just finished telling you that Aussies were a happy bunch — happiest in the world, if you believe everything you read.

Sure, 89 percent of the more than 2,000 surveyed by researchers from Melbourne's Monash University said they were "happy" or "very happy," AFP reports.

And 70 percent were "satisfied" or "very satisfied" with their financial situation.

But more people were pessimistic about the short-term future.

Asked whether life would likely be better, about the same, or worse in three or four years, the number answering "a little worse" or "much worse" increased from 12 percent in 2009 to 17 percent in 2011.

According to the "Mapping Social Cohesion" survey, commissioned by the philanthropic Scanlon Foundation, Australians also reported being less trusting of one another than they once were. And they were concerned that the gap between rich and poor was too large.

Perhaps unsurprisingly, the blame has been placed squarely on politicians.

Andrew Markus, who analyzed the survey results, told The Sydney Morning Herald: "What goes on in Canberra doesn't stay in Canberra. That style of politics is having ramifications in the outside community. People are being told the government is so stupid they can't even solve the simplest problems."

Only 30 percent of those surveyed believed that the Australian government could be trusted to do the right thing — a sharp drop from a 2009 high of 48 percent, the SMH reports.

More than twice as many now feel the government can ''almost never'' be trusted.

Increasing the disillusionment with government was the issue of immigration, particularly divisive of late as Australia struggles to decides how it feels about asylum seekers arriving in their "lucky country," whether they can stay and in what numbers.

Down Under recalls seeing a bumper sticker recently that summed up precisely how many Australians feel about the matter. Inside the outline of Australia's borders were written the words "Fuck off, we're full."

The survey results suggested not only that the issue of asylum-seekers had exacerbated divisions in society but that people were "close to unanimous in the view that the government is incapable of dealing with this issue."

While a majority of Australians (55 percent) believe the immigration intake was "about right" or "too few", there was a distinction drawn between refugees arriving after being assessed overseas and asylum-seekers coming on boats.

"We remain implacably hostile to asylum-seekers who make their way here by boat. It's all about the boats," Markus said.

In order, the top-5 worries of Australians right now were: