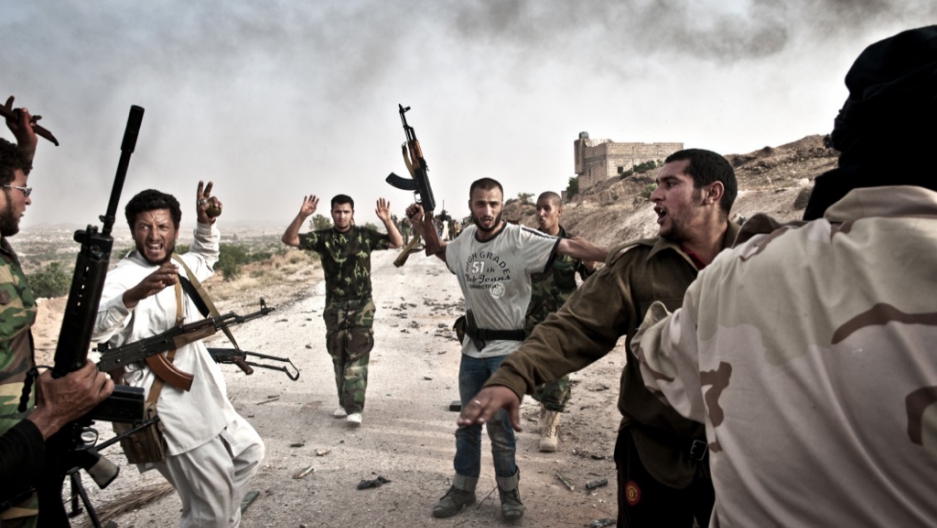 His hometown, Tarhouna, was known as a bastion of loyalist support, located on the outskirts of Tripoli. And so when the conflict began earlier this year, Matug was called to serve.

His brigade, like all units serving Gaddafi, was broken up and then regrouped so that soldiers fighting alongside each other were not from the same towns. Access to Arabia and Al Jazeera television networks was immediately cut. And when NATO began its airstrikes, they were moved to the countryside.

In April, however, instead of participating in the invasion of Misrata, Matug laid down his gun and surrendered to rebel forces. He then went on television to call on other troops to do the same.

But more than a month after the fall of Tripoli, and despite almost no hope of winning, loyalist soldiers continue to fight — their backs against the wall — to defend the city of Sirte, the last-remaining Gaddafi stronghold.

Defected and captured loyalist soldiers said there are a number of factors motivating their former comrades, including the hope of financial reward and a fear of civil war. But the paramount reason to keep fighting, they said, is the fear of reprisals.

“I had commanders from Sirte,” said Matug, whose wrists are scarred from the kind of punishment loyalist soldiers received while in a rebel-controlled prison in Misrata. “They don’t want to surrender, they think they will be executed.”

Badr Omar, a 35-year-old English teacher who managed to flee Sirte earlier this week, said that many men have been told that the rebels, if they take the city, will rape their wives and their daughters.

Omar is among a half dozen men who have escaped Sirte and who have told GlobaPost that Mutassim Gaddafi, a Libyan Army officer and the fifth son of Muammar Gaddafi, is still inside the city rallying troops on the radio and talking to civilians in person.

Mutassim has accused the rebels of rape and other atrocities, Omar said.

“He comes in a truck at night to give the young men smokes and weapons and to talk to them about armies still in Bani Walid and Ghadames,” he said. Omar said he just saw Mutassim a few days ago.

When Omar decided to leave, he tried to convince his father and brothers to come with him. But he said they refused, swearing that they would fight and die in Sirte.

“All for nothing, for the wrong information,” Omar said. “They fight not to win, but to protect their families.”

The fear of reprisals is not unfounded. Several international organizations, including Human Rights Watch and Amnesty International, have documented widespread abuses on behalf of the rebel forces and have called on the National Transitional Council to put a stop to revenge attacks.

Loyalist soldiers said there are a variety of other reasons, as well, that are likely motivating the last remaining Gaddafi fighters.

“When I saw the national (revolutionary) flag,” said Omran, who lives in a town near Misrata. “I felt like it was from a different country. We know Gaddafi, we don’t know anything else.”

He said that the loyalists he knows are still fighting because they simply believe they are on the right side. He pointed to conflicting media reports early on in the conflict, especially by Al Jazeera, which he said gave false and misleading reports about Gaddafi’s use of airstrikes.

“This led us to just watch state TV,” he said.

Mohammed Ibrahim, whose brother is a spokesman for Gaddafi, denied that the spark of the revolution — when government security officers turned their guns on unarmed protestors in Benghazi — ever happened.

“Gaddafi soldiers only shot people with guns,” he said. “State TV was only a little propaganda compared to the international media propaganda.”

Men from the town of Tawerga, where some 35,000 black Libyans live, said they sided with Gaddafi because the people who live in the nearby rebel stronghold of Misrata have long mistreated them.

“It’s not a problem of Gaddafi, it’s a problem of black and white,” said Hassan Emnasser, a Tawerga refugee. “Misrata people don’t treat the people of Tawerga right. It’s hard to get a job, so they join the Gaddafi army.”

Emnasser said he had much more to say, but was reluctant because he thought that the Misrata rebels were watching him closely. “If they hear what we have said, they’ll kill us,” said Emnasser’s wife, Sami.

Related: Inside Libya's most notorious prison

The threat of civil war is also likely motivating many soldiers to continue fighting. Omran said that a strong central leader like Gaddafi was needed to prevent the break up of the country.

Even outside observers, and leaders in the West, have expressed concern that Libya could fall into civil war after the last remnants of Gaddafi’s army are defeated. Power struggles between rebels based in the western part of the country and rebels based in the city of Benghazi in the East have already been well documented.

“From the beginning, Gaddafi told us, ‘If I fall down, everything will collapse into tribal and civil conflict.’ I was afraid of city against city, so I was loyal on this matter,” Omran said.

Ibrahim said he didn’t think it was possible for Libya to remain stable without Gaddafi at the helm.

“After two or three years, you will see this … a very sad future under east, west, south — Libya will be split up,” he said.

Muftah Sadik, a loyalist soldier from Sirte who surrendered in July, said those officers who are members of Gaddafi’s tribe in Sirte would never surrender. He guessed that at least two Gaddafi battalions had pulled back from the eastern front to further defend the city.

“Some have the idea, if I’m going to die, let’s fight to the death,” he said.

At the Sadoon schoolhouse in Misrata, where military prisoners are being kept in relatively good conditions, a man who declined to give his name said he’d been captured a week ago in Sirte. Like most loyalist soldiers, he offered few words.

“Sarkozy is a motherfucker," he said. "NATO is a killer.”