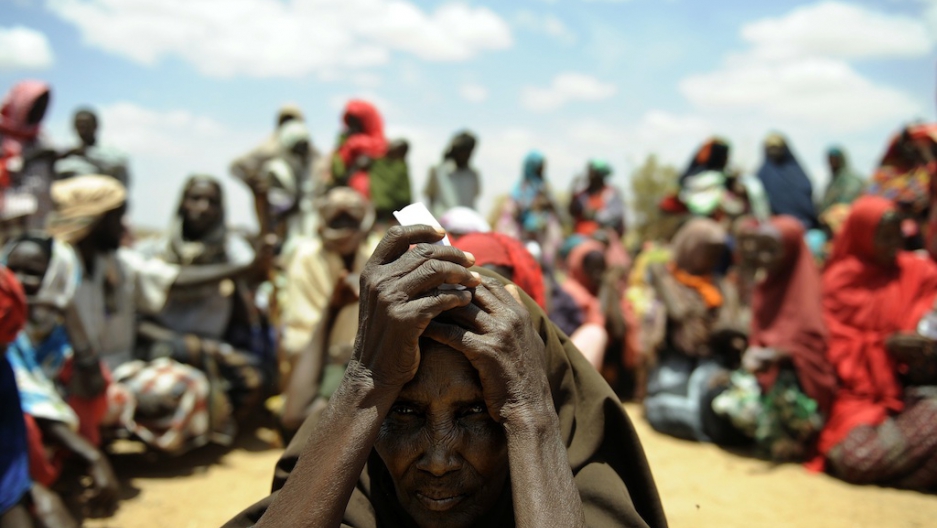 A newly arrived elderly Somali woman displaced by the widespread famine in the country waits with others to be registered as refugees in Doolow, south western Somalia.
Credit: Tony Karumba
Share

WASHINGTON — The photographs are familiar from famines past, but no less chilling for that: Skeletal infants left by their parents to perish by the side of a dusty road, the desiccated husks of cattle and camels, and empty-eyed men and women carrying their pitiful bundles hundreds of miles to the shelter of overcrowded refugee camps.

Once again starvation stalks Somalia, and this time the United Nations says as many as 750,000 people may die in the coming months.

There is hunger throughout the Horn of Africa — in Djibouti, Eritrea, Ethiopia, Kenya and elsewhere — but especially in Somalia, the quintessential failed state, there is the certainty of widespread famine.

There’s blame enough to go around: donor nations that, despite advanced early warning systems, were unable to mobilize assistance quickly enough; the genocidal jihadists of Al Shabaab who prevent the delivery of aid; Washington and Ethiopia, whose military meddling may have made a bad situation worse; and ultimately the Somalis themselves who have proven incapable of self-governance for the past 20 years.

If there is any silver lining it is that the worst effects of this disaster still can be mitigated. Lives can be saved if the world responds quickly and generously. The response will certainly not bear any resemblance to the U.S. military-led humanitarian intervention of the early 1990s. Nor will Somalia be transformed anytime soon into a functioning, self-governing state capable of addressing its own emergency needs. Instead, what has begun and what must continue is a complex and costly relief operation to provide life-saving help to millions of people in a vast area characterized by poor infrastructure, broken economies and chronic insecurity.

This relief effort will require money and lots of it, about $2.5 billion for affected countries of the sub-region, according the United Nations. The over-promised and under-delivered international race to “rebuild Haiti” has tarnished the image of the humanitarian community, but the solutions in Somalia and its neighbors are in some ways simpler. The U.N. and the non-governmental organizations know perfectly well how to erect shelters, deliver potable water, provide food and medical care, and meet the needs of particularly vulnerable groups — if they have sufficient financial resources.

On this front at least there are signs of hope. The United States has so far been the single largest donor, but generous new contributors are stepping forward, notably in the Middle East. Partly as a demonstration of religious solidarity, but also to show their bona fides as good global citizens, predominantly Muslim states such as Saudi Arabia and Turkey have pledged an impressive total of $350 million.

At the other end of the spectrum, the world’s putative future economic giants have shown less largesse. China has so far made a donation of $16 million to the World Food Program, respectable enough, but far from commensurate with its growing global status. Even stingier is India with combined total contributions of only $10 million. By contrast, Australia, with a population about the size of Beijing city, has anted up $57 million.

Sadly African charity has also fallen short of the mark. At a recent high-level famine conference held in Addis Ababa, only four of Africa’s 54 invited heads of states bothered to show up, and pledges of assistance by the continent’s governments amounted to a paltry $46 million. Fortunately the African Development Bank went some distance in salvaging the continent’s reputation by promising another $300 million.

And ordinary Africans understand the urgency of this catastrophe. Kenyans, using cellphones, have made hundreds of thousands of dollars of donations to drought victims in their country, and an entrepreneurial 11-year-old Ghanaian schoolboy is reported to have raised $6,500.

In the current global economic crisis when life on the home front becomes ever more pinched, the case for more foreign aid is an extraordinarily tough sell. But surely exceptions must be made when the lives of three-quarters of a million people are at stake. Ultimately we will be judged by our generosity.

Chris Hennemeyer is a Washington, DC-based international development consultant with over 25 years of African experience.