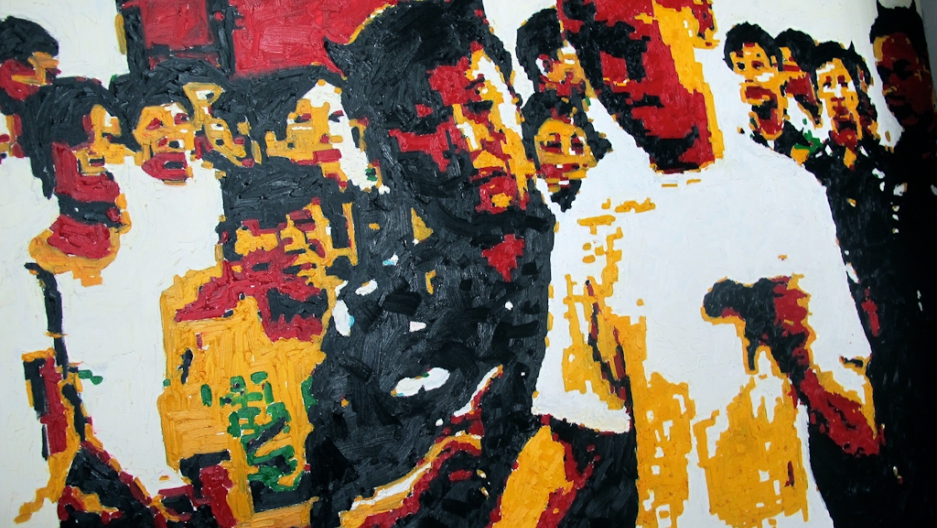 A painting by a Chinese hepatitis carrier portrays a young man who murdered two people in Zhejiang province after being rejected for a government job in 2003 when he tested positive for the virus.
Credit: Kathleen E. McLaughlin
Share

BEIJING, China – For at least 10 percent of China’s population, the future can hinge on a blood test.

While China is home to an estimated one-third of the world’s hepatitis B carriers, it’s also a place where those with the virus are routinely rejected by employers and schools, spurned by friends and romantic partners. And while discrimination isn’t going away, the nation’s hepatitis sufferers have new means, some legal and some deceitful, to battle bias.

In recent years, a plethora of websites has emerged where China’s hepatitis carriers can hire “gunmen” to take blood tests on their behalf. Hired guns can be paid to take just about any test in China these days and blood screening is no exception. For between $125 to $300, gunmen with no viral infections show up at pre-employment health exams and, essentially, give job candidates with hepatitis equal footing.

From China: Why are people disappearing in China?

It’s no surprise the shady services have become popular, given how those with the virus are cut off from work and education opportunities once their status is disclosed. Recent surveys from Yirenping show widespread discrimination is firmly rooted, based on faulty beliefs that the virus is easily spread.

Zhou Juejiang, 24, has lost multiple opportunities because she has hepatitis.

“In 2005, I applied for a job and I voluntarily informed the company I'm a carrier,” recalled the native of Gansu province. “I got so emotional on the phone I cried. I promised to work hard. They say they would discuss it with superiors and never responded.”

“I got turned down by lots of employers,” she continued. “My only choice seemed to be to return to my village and do farming, which was the only job that didn't require medical checkup.”

Yet more than a year after the Chinese government banned companies, governments and schools from requiring hepatitis B tests, the practice remains widespread. Advocates for people with hepatitis and carriers of the virus say despite the order, most companies still require the exam as part of the application process, and reject all job candidates who test positive.

Yang of the Yireping center said hepatitis screening even remains widespread in the nation’s kindergartens, where toddlers with the virus can be kept out of top schools.

All this despite the fact that hepatitis B, passed through blood and bodily fluids, is endemic in China, though not something easily spread in the average workplace. International health agencies say China’s vast population was widely exposed to hepatitis over the years through poor needle hygiene and a heavy reliance on injections and infusions, coupled with a low vaccination rate.

Yang said widespread misinformation about hepatitis B traces back to an outbreak in Shanghai and Nanjing in the early 1990s, when tens of thousands fell ill. Since then, screening has become routine.

Yirenping’s past surveys found that state-owned companies and government offices routinely used the tests to disqualify job candidates, while private firms were only slightly less demanding. Foreign companies were no better, scoring just as low as their Chinese counterparts on requiring blood tests and rejecting job applicants with hepatitis B.

Yang said the key now lies not in hiring others to take blood tests, but in the legal system. The law is on the side of hepatitis carriers, but as with most employment law in China, implementation takes time and testing. Yirenping, which has ruffled feathers with the Chinese government in the past, helps victims of discrimination hire lawyers and sue. And though ignorance is rampant, Yang is optimistic.

“It used to be that every lawsuit we helped with was groundbreaking,” said Yang. “Now there are so many it’s becoming normal.”