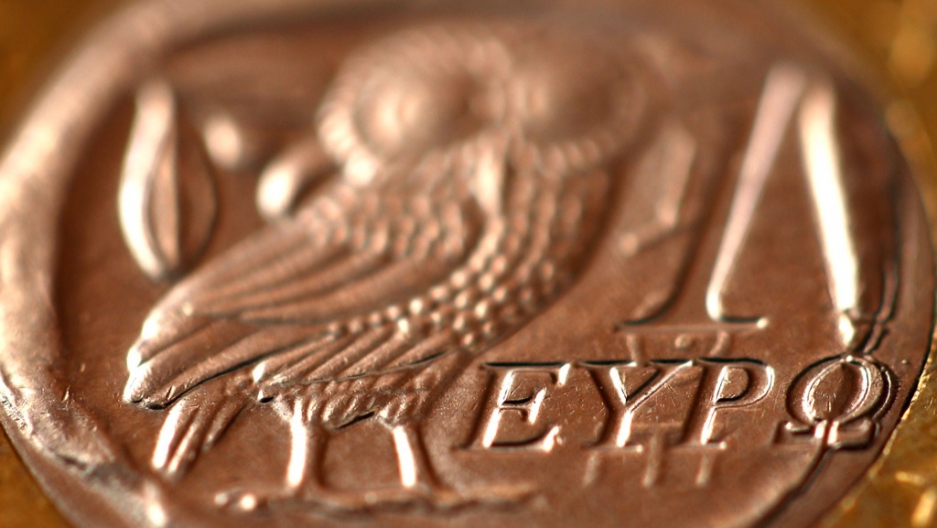 A detail view of a Greek one Euro coin is pictured on June 21, 2011 in Athens, Greece.
Credit: Vladimir Rys
Share

London —Over the weekend, European leaders attending the annual International Monetary Fund meeting in Washington were verbally flogged for their inaction in solving the euro zone crisis. The fear is that their foot-dragging will mean that sovereign default in Greece could spill over into other countries and take down the entire global economy.

They appear to be getting the message. Finally, a plan is coming into focus. Expected within five to six weeks, it would allow Greece to default on its debts, and banks and other creditors would take a 50 percent loss. But the euro zone will not break up — not yet at least. The plan would also expand Europe’s bailout fund to 2 trillion euros, according to the BBC.

In an interview with Bloomberg over the weekend, German Chancellor Angela Merkel called for a “barrier” around Greece to prevent the fallout from taking down other European economies. (Bloomberg also reported that the chancellor said she is being treated for high blood pressure.)

So how does the plan stack up?

For starters, recognizing the inevitability of Greek default appears to be a step in the right direction. For all its profligacy and inability to collect taxes, Greece’s problems are rooted in a problem beyond their control, namely the imbalance between economic performance in the euro zone's northern and southern tiers.

"In the first decade of the euro's existence Germany had weak price growth, wages barely rising," explains Simon Tilford of the Centre for European Reform, a London think-tank. The result, he says, was an export-driven boom. The euro strengthened, and the Mediterranean countries found themselves living with an inflation created by Germany's economic success.

"Now," says Tilford, "for the south to export and grow their economies, Spanish and Italians need to cut their costs relative to Germany. Germany needs to engineer inflation." This would mean German labor costs would go up.

Given that fear of inflation has been part of Germany's social DNA since the 1920s, it is hard to imagine Chancellor Angela Merkel or any German politician advocating a inflation so that fellow euro zone citizens can improve their economies.

What Merkel can do is promote ratification of the European Financial Stability Facility — the bailout fund — agreed to at the EU summit on July 21st. The Bundestag is due to vote on it this coming Thursday.

Related: With the euro in crisis, is Europe finished?

It is expected to pass, with the help of opposition parties. But nothing is simple in this crisis. The key question is how many members of Merkel's coalition will vote in favor. Ulrike Guerot of the European Council on Foreign Relations in Berlin calls this "the chancellor majority." Guerot says "60 or 70 percent of the political parties in the Bundestag are in favor of the [bailout fund]." Most of the resistance comes from Merkel's own Christian Democratic Union. If a significant number rebel against the chancellor, short sellers may continue to make money betting against the euro.

While Guerot doesn't expect the rebellion to be that large, she says Merkel has to level with the German people. "She needs to tell them there are no good solutions to the crisis. There must be more fiscal union." She adds, "Ultimately, that will happen. She will say there has to be deeper fiscal and political union and probably a euro bond."

But that is for the medium term, over the next two years. The short term for the euro zone is a more difficult proposition. Simon Tilford says, "The euro is unlikely to be in its current form in 12 months." He expects some countries to abandon the currency.

Stephen Gallo, head of market analysis at London's Schneider Foreign Exchange, does not see the situation as that bleak. He expects the European Financial Stability Facility to be ratified by all euro zone countries. "When they do that they will buy themselves time." He adds that the euro zone can "absorb a Greek default ... and possibly that of Portugal" in order to protect its core countries.

Then he expects the markets to turn to "the biggest elephant in the room — U.S. debt."