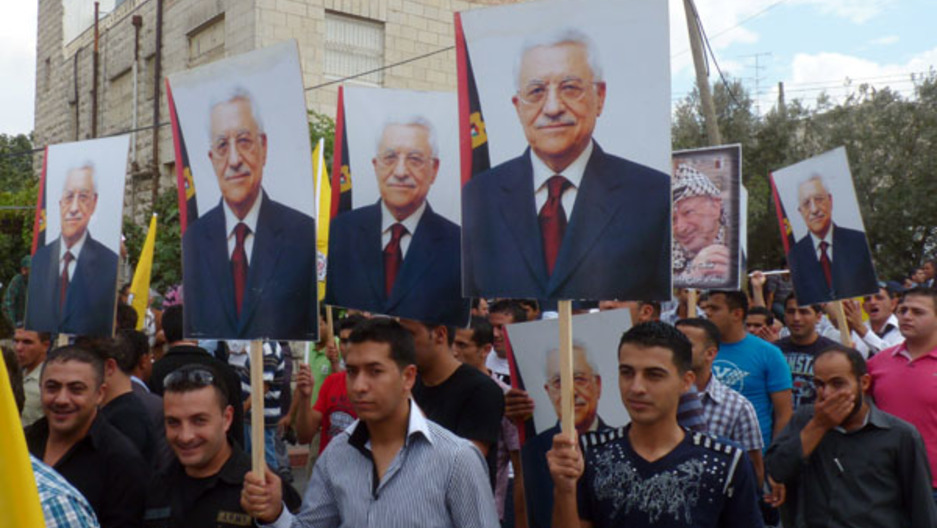 Palestinians gathered in Ramallah on Sunday to welcome President Mahmoud Abbas back from the United Nations. (photo: Matthew Bell)

Share
Palestinian president Mahmoud Abbas has never been described as a fiery or charismatic leader. But after his speech to the United Nations on Friday — following his request for Palestinian membership at the UN — Abbas is riding a new wave of popularity among his public. The question is, where is he going to ride it? Huge posters with pictures of Abbas were hung from street lights in Ramallah on Sunday, while crowds of Palestinians stood on the sidewalk to see the president's motorcade pass by. Returning from his trip to UN headquarters in New York, one of the first things Abbas did was lay a wreath at the tomb of the late Palestinian leader, Yasser Arafat. But it was clearly Abbas himself who was the man of the hour. Youth from the West Bank town of Jenin — a hotbed of Palestinian militancy during the last intifada — carried pictures of Abbas and they shouted allegiance to their president and "the revolution" as they entered the Mukataa in Ramallah. The site is both Arafat's final resting place and the central headquarters for the Palestinian Authority. Upwards of 5,000 people gathered to welcome Abbas back from what many Palestinians see as their president's historic trip. "My brothers and sisters," Abbas told the crowd, "hold your heads up, you are Palestinians!" But the president also said, "the diplomatic and political campaign of the Palestinian leadership is just getting started." "There's a long way to go," he added, "and we need your help." Many Palestinians doubted that Abbas would ever defy the United States by asking the Security Council for full UN membership. But by doing just that, and by giving a defiant speech on the floor of the UN General Assembly last Friday, Abbas seems to have come into his own. Palestinian journalist Bassem Barhoum said the president has finally emerged from the shadow of the late Yasser Arafat, who is still revered by Palestinians and described as a leader with great charisma. "Now, we [have] started with Abbas stage," Barhoum said. "We were still living with Arafat's stage and now, we started with Abbas stage." Barhoum said he was not sure what is next for the Palestinian president. The US has promised to veto the Palestinian bid for UN membership in the Security Council. Abbas is then expected to ask the General Assembly to recognize Palestine as a non-member observer state. Whatever happens in New York though, university teacher Iman Taher said Palestinians are feeling a newfound sense of dignity and hope. She was attending the rally in Ramallah on Sunday. Palestinians might not know exactly how to get there, but Taher said Abbas has articulated to everyone where they want to go. "We need life," Taher said. "To have life like others, this is [what] people here are looking forward [to] in the future: to have their state." For all his newfound success, it is not clear what comes next for Abbas the politician. The 76-year-old leader is said to be conscious of his legacy. He has said he won't run in another election. There's speculation that Abbas is looking to resign sooner than later. But Alaa Yagui — a member of the president's Fateh party — says the president should stick around and take advantage of his new political momentum. "It should be a very good start for the Palestinian politics," he said. "For the Palestinian future." "It wouldn't be a good step if he's going to resign." But if Abbas is serious about leading the way back to negotiations with Israel, the Palestinian president has not started to move in that direction. Paul Hirschon of the Israeli foreign ministry gave one example; he said Abbas has signaled just the opposite by accusing Israel of the following. "Occupation for 63 years," Hirschon said. "If we're talking about the Israeli being an occupier for 63 years, then it's not about the West Bank, it's not about the Gaza Strip," he said. "It's about the existence of a Jewish state." If Abbas really wants a genuine two-state solution, with a state of Palestine living side-by-side with the Jewish state of Israel, Hirschon said, "then, we can do a deal." But it is tough to see how a deal would be possible anytime soon between Abbas and Israeli Prime Minister Benjamin Netanyahu. The Palestinian president was just quoted saying that he viewed Netanyahu as the most inflexible Israeli leader he's ever known. And Mahmoud Abbas has a lot of experience. Abbas has taken part in negotiations with five previous Israeli prime ministers.