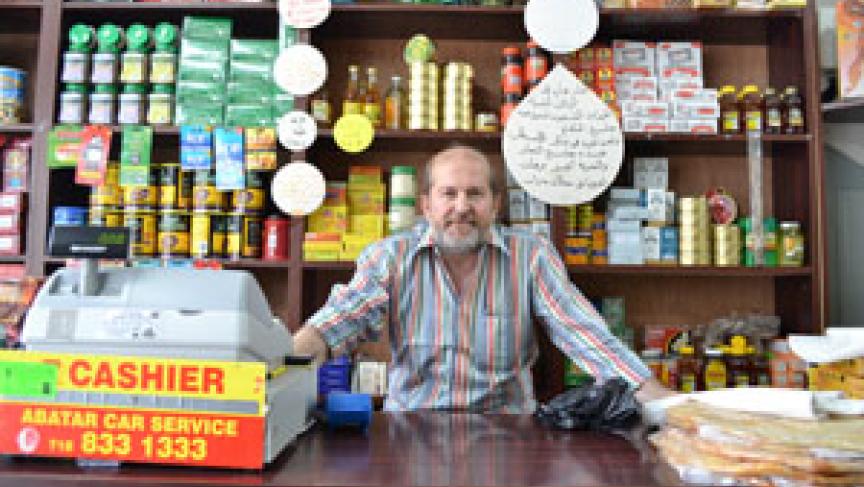 Story by Assia Boundaoui for PRI's The World. Listen to audio for full report.

Defying U.S. and Israeli opposition, Palestinians asked the United Nations on Friday to accept them as a member state, sidestepping nearly two decades of failed negotiations.

The Palestinian leadership hopes this dramatic move would reenergize their quest for an independent homeland.

But in New York City, Palestinian-Americans are on the fence about whether a state of Palestine will ever exist and are worried about what statehood would actually mean.

At the Bayridge Café on 5th Avenue in Brooklyn, Palestinian-American Yousef Jadallah sips his coffee as he watches experts on Al Jazeera discuss the statehood bid. And he did not look too optimistic.

"It's a good step, but useless. It's all politics," he said. "We're not gonna get full membership in the UN so what's the use. My opinion: waste of time, it is 64 years past due."

Down the street at Badran Halal meats, owner Mamoun Hammouri is equally pessimistic about the possibility that the UN will grant membership for Palestine.

Habib Joudeh runs the pharmacy next door to the butcher shop. He said what he wants to happen and what he believes is going to happen are two different issues. In fact, he said, the bid for a Palestinian state will be futile.

Kenazi has written about the Palestinian situation and the frustration many feel with stalled negotiations.

"If there are still these restrictions, if there's still the cutting off from West Bank Palestinians to West Bank Palestinians, never mind East Jerusalem and the Gaza Strip, then you really have a structure of the status quo," he said. "It's just a formalized situation where you would have statehood but no real rights, no real autonomy, no control over your territory, no functioning body that could actually exercise the fundamental rights of Palestinian people."

Some Palestinians say the division over whether to support or oppose the UN bid is generational: younger Palestinians are opposed to the move while the older generation is looking for something, anything to change.

Others say the divide is a geographical one, with Palestinians who live in the West Bank and Gaza generally in support of full membership in the UN, and Palestinian refugees and those who live in Israel are opposed to a recognized state that would not include them.

Dr. Ahmed Jaber, a Palestnian-American who runs a gynecology practice in Brooklyn, says whether you are for, or against the UN statehood bid, the fact is that it has raised more questions than answers. Questions no one can answer now.

"Is it going to make problems on the street in the West Bank and Gaza? Will there be a third intifada? What is really the 1967 border, does that exclude the Palestinians who were inside the Green line in 1948 Palestine? What will happen to them? Are we abandoning them? How about the right of return?" Jaber asked. "Whether this step is good for the Palestinians or not, I don't know, we have to wait and see."