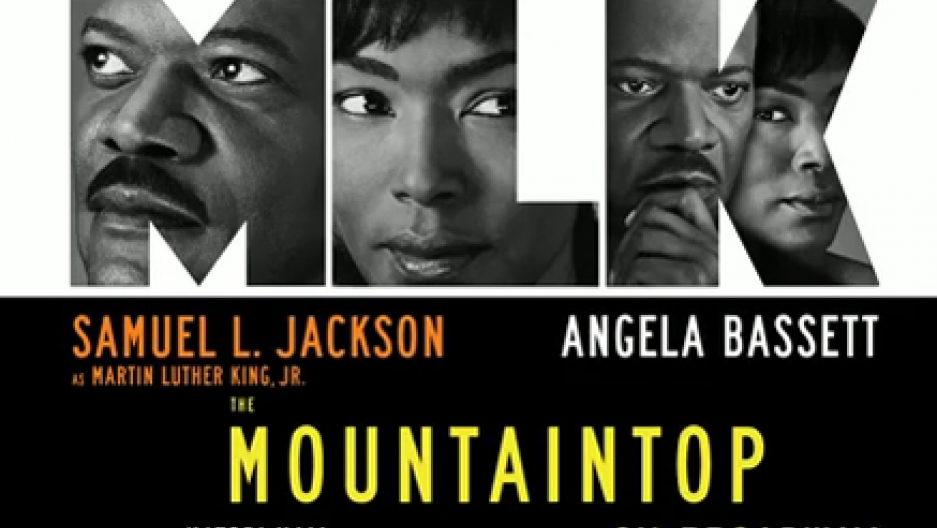 Story from The Takwaway. Listen to audio above for full report.

In April of 1968, Dr. Martin Luther King Jr. gave an eerily prescient speech. "I just want to do God's will,"  he said. "And He's allowed me to go up to the mountain. And I've looked over. And I've seen the promised land. I may not get there with you. But I want you to know tonight, that we, as a people, will get to the promised land!"

King was assassinated at the Lorraine Motel in Memphis, Tennessee the following day. A new Broadway play called "The Mountaintop" imagines what King's private moments in his hotel room were like in the hours leading up to his death.

The play stars Samuel L. Jackson as King and Angela Bassett as Camae, a maid in the Lorraine Hotel.

"He's caught up in the fame of being the most loved and respected civil rights leader on the planet at that time," Jackson said, describing his role as Dr. King. "He's filled with a lot of fear. He's filled with a lot of doubt because a lot of the things he's trying to do don't seem to work. So it's an excellent opportunity as an actor to explore someone who comes out of his public persona and closes the door and is able to relax for a moment."

Katori Hall, the author of "The Mountaintop," says it was her mother who inspired her to write the play. "When I was a young girl, she kept telling me this story over and over again," she told The Takeaway.

Hall's mother grew up by the  Lorraine Motel, and had planned to go see Dr. King speak. "She was so inspired by him, she was invigorated by him," Hall said. "He made her walk a little taller and love herself a little bit more. And so, she just wanted to be in the presence of greatness and hear this great orator speak."

But Hall's mother never got to attend the speech. "He was assassinated, and that was the greatest regret of my mother's life, and that story just stayed with me," said Hall.

Hall wrote the play in part to tell her mother's story, in part to keep Dr. King's legacy alive. "Unfortunately, as a young person, Dr. King is in the past -- he's a statue, he's a museum piece -- and he is not that," she said. "We are living in his legacy, we are living in his light -- or at least we're trying to -- and I don't want people to forget Dr. King."

"The Mountaintop" was a hit in London and is currently in previews on Broadway. The play opens on Broadway October 13, 2011.

View video of Samuel L. Jackson talking about  his role in "The Mountaintop":