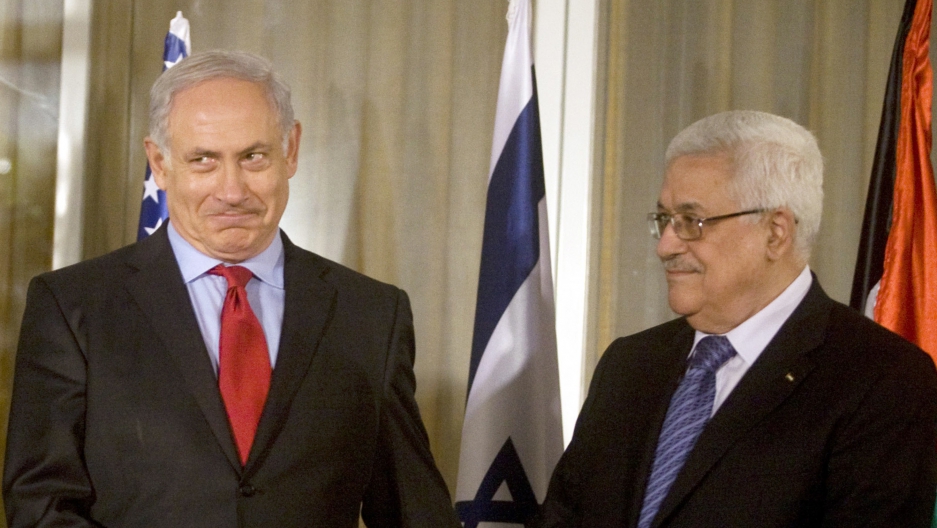 JERUSALEM — As in the case of countless twosomes before them, the encounter between Palestinian President Mahmood Abbas and Israeli Prime Minister Benjamin Netanyahu on Friday may have suffered from a little too much buildup.

Both men of a certain age, each with his own well-documented trajectory, it may have been too much to hope for fireworks or the sparks of something new, no matter how extravagant the address for this particular blind date.

As was to be expected, each put his best face forward, arriving on time, scrubbing up nicely, doing his best to conceal his most embarrassing flaws and lying only when he really, truly had no choice. What fine-looking, if well-worn, fellow of 45 setting out on yet another blind date doesn’t put on well-tailored black jeans and a soignée T-shirt to try to get away with saying he is only 37?

This is the sort of rendezvous that ends with each party relieved not to have ended up in the apartment of the other, only to feel regretful for having wasted any time at all. And each, hurrying to the safety of home, finds himself swallowing an aftertaste of stale wine.

So it is these days with the Israelis and the Palestinians.

And just like after so many other forgettable blind dates in history, even their friends are already bored by another iteration of the story.

Friday night the central squares of Ramallah and Bethlehem were crowded with people eager to hear Abbas’ calls for recognition of statehood at the United Nations in New York City broadcast onto large screens. But in Jerusalem it was impossible to interrupt the normal weekend revelry of Jerusalemites — East and West — with questions about the local drama taking place overseas.

Arabs, both Muslim and Christian, in East Jerusalem, and Jews, who reside mostly in West Jerusalem, were unified by a collective yawn. And bars East and West, sometimes separated only by a few hundred feet, saw business unaffected by the business of state.

At Sira, a popular West Jerusalem bar, the eyes of smoking and sipping young men glazed over in disbelief when asked if they had any reaction to the diplomatic war of words at the U.N. General Assembly. They had reactions only to the unseasonably chill air and hint of a drizzle that penetrated the night.

Opinion: US should support Palestinian statehood

Jerusalemites of all stripes evince extreme aversion to rain. The Palestinian Authority had announced that Abbas’ speech would be broadcast on a large screen hung over Damascus Gate, in East Jerusalem. About 80 journalists showed up, less than 10 Palestinians and, most perplexingly, no screen.

People milled about wryly contemplating who to interview. Later at night, at the strip of bars in Sheikh Jarrakh in East Jerusalem, many of the weekend merrymakers shrugged their shoulders and sucked on nargilehs (hookahs), almost confused by the very same question.

“I honestly couldn’t care less. Why would I watch them?” asked one young Arab man who identified himself as Jalal.

The next morning did not offer a dramatically changed picture.

At the Smadar café, a popular brunch destination, Arnon Friedman polished off a coffee shared with his son, Yonatan. Friedman, a secular Jewish businessman, and ignored the speeches altogether.

“All they do is repeat themselves all the time. No progress. They are both totally stuck in the past and go around blaming each other,” he said.

His 29-year-old son, a student of architecture, missed Abbas but saw the part of Netanyahu’s speech that did not interfere with his dinner. “I hope it will bring peace, but I have my doubts,” he said.

Israeli media reported that U.S. President Barack Obama had asked Netanyahu to moderate his speech, and that Netanyahu acquiesced. Saeb Areikat, the Palestinian negotiator who has been in the peacemaking business for 20 years, told Israel Radio, “I hoped to see Israelis in Tel Aviv, Haifa and Jaffa waving Palestinian flags in celebration with us.”

Related: Is this the end of Israel as we know it?

Next to them, a father of two young girls ushering them in to a movie smiled, “I also didn’t watch a thing.”

Smadar’s chef, Diae Sabri, an Arab originally from the town of Jaljulia, heading out for a cigarette break, said, “Truth be told, I’m just not interested in them.”

Ra’ed Taha, 35, the owner of Abu Shukri, the hummus eatery near Damascus Gate, said his restaurant was so full he had to send potential patrons away on Saturday morning. He believes Abbas initiated the U.N. gambit in order to burnish his own historical legacy, not because real change might ensue.

“I don’t think it’s the right decision at all,” Taha, who is Muslim, said. “Things are good. Business is good. We have tourists here, people come to eat day and night. This is not the right time to make trouble.”

Taha, whose family owns two more Jerusalem locations of the legendary restaurant, plans to open his first Tel Aviv branch in a few months. He is scouting locations. But he hasn’t signed anything yet, “because I just need to make sure everything stays quiet.”

Amro Izhiman, 28, a Muslim Arab and another heir to a famous Jerusalem gastronomic empire, the El Dorado Coffee and Chocolate Emporium, is opposed to Abbas’s initiative for another reason altogether.

“If the UN wanted to recognize Palestine they should have done it 30 years ago, in the 70s,” he said. Izhiman opposes the two-state solution championed by both leaders. “I believe in a one-state solution. I want to remain Israeli and Palestinian in a single state. The only good thing that may come of this is if the U.S. vetoes and the Palestinian Authority is dismantled.”