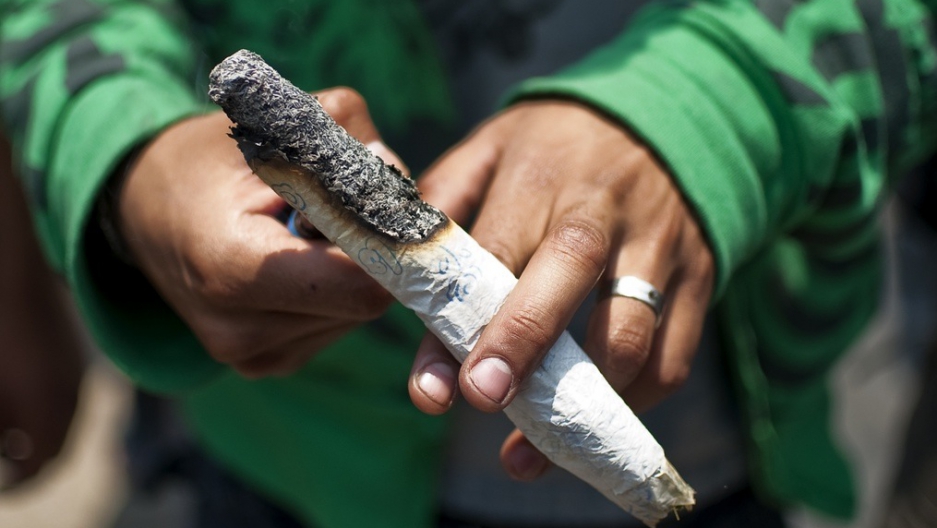 Why can't you buy these in U.S. drugstores?
Credit: Ronaldo Schemidt
Share

MEXICO CITY, Mexico — Flanked between Mexican and U.S. flags, President Felipe Calderon was unleashing his familiar tirade against drug gangs in a speech in New York on Monday.

The cartels are carrying out mass murder, he said. They are a regional threat.

And then he dropped his bombshell.

If the United States can’t cut demand for drugs, Calderon said, it must look for alternative solutions.

“We are living in the same building. And our neighbor is the largest consumer of drugs in the world. And everybody wants to sell him drugs through our doors and our windows,” the Mexican president said. “If the consumption of drugs cannot be limited, then decision-makers must seek more solutions — including market alternatives — in order to reduce the astronomical earnings of criminal organizations.”

The comment unleashed shockwaves on both sides of the Rio Grande. Here was a man who has waged the biggest campaign against drug gangs in Mexico’s history — and who U.S. President Barack Obama even called Mexico’s Elliot Ness — saying that the U.S. should consider legalizing drugs.

Or is Calderon really saying that?

The speech was actually the second time in less a month that the Mexican president had used his phrase “market alternatives.”

The first came in a televised speech in Mexico on Aug. 26, the day after gangsters burned down a casino in Monterrey, killing 52 apparently innocent customers and croupiers.

More: Other victims of the violence

“If [Americans] are determined and resigned to consume drugs, then they should seek market alternatives in order to cancel the criminals’ stratospheric profits,” he said then.

Following that, pundits speculated that the anguish of the casino deaths may have made Calderon use a clumsy turn of phrase.

But the second time was a clear confirmation that he was deliberately putting forward a new idea.

Press officers at Mexico’s presidential palace said they could not comment on the meaning of Calderon’s words. But pundits are all convinced that “market alternatives” is Calderon-speak for the dreaded "L-word” — legalization.

“Everyone understands what Calderon is now saying. But he is using the softer phrasing to cause a little less controversy,” said Jorge Chabat, one of Mexico’s most prominent political commentators.

The question remains as to why at this stage in his presidency, Calderon has shifted on such a central policy.

After Calderon was sworn into office in December 2006, the war on drugs quickly became the centerpiece of his administration. He sent soldiers and federal police to burn down crops, seize labs and extradite kingpins to the United States.

While praising the soldiers as heroes, Calderon railed against the “evil” of drugs and said the legalization could lead to many young people suffering.

But after more than 40,000 drug related murders since then, Calderon has apparently grown weary of a war with no end.

“Mexican presidents learn from the reality of power that the war on drugs doesn’t work,” Chabat, the analyst, said. “He hasn’t seen clear results, and this seems to have made him genuinely change his opinion.”

The last two Mexican presidents, Ernesto Zedillo and Vicente Fox, also converted to the cause of drug-policy reform on leaving office.

“We have to take all the production chain out of the hands of criminals and into the hands of producers,” Fox told GlobalPost in a recent interview. “So there are farmers that produce marijuana and manufacturers that process it and distributors that distribute it and shops that sell it.”

Calderon has just come to the same conclusion a little earlier, Chabat said.

It remains to be seen what effect Calderon’s new rhetoric could have on Washington’s policy.

Drug-policy reformists in the United States have already heralded Calderon’s statements, saying they will help their cause.

“It is incredibly useful,” said Tom Angell, spokesman for Law Enforcement Against Prohibition. “If President Obama sees his major foreign partner in the war on drugs say that maybe we ought to stop it, then Obama may be forced to address this in a meaningful way.”

Activists argue a first step would be the legalization of marijuana, which would take a huge cash crop away from Mexican cartels.

A referendum to legalize marijuana will be held in Colorado in 2012, with activists also looking at possible referendums in California and Washington states.

However, Obama has shown little sign of being receptive to these activists. His drug tsar, Gil Kerlikowske, has taken a hardline against any such reform, while federal agents have busted medical marijuana farms in places such as California, where medical cannabis is legal under state law.

Calderon himself will step down from power in December 2012 and is not allowed by law to stand for re-election.

But once the door has been opened to a Mexican president questioning the war on drugs, others could follow.

“We’ve seen a wave of former presidents in Latin America opposing the war on drugs. Now this could be a time of standing presidents becoming emboldened and opposing it,” Angell said. “And this could mean a sea change in policy."