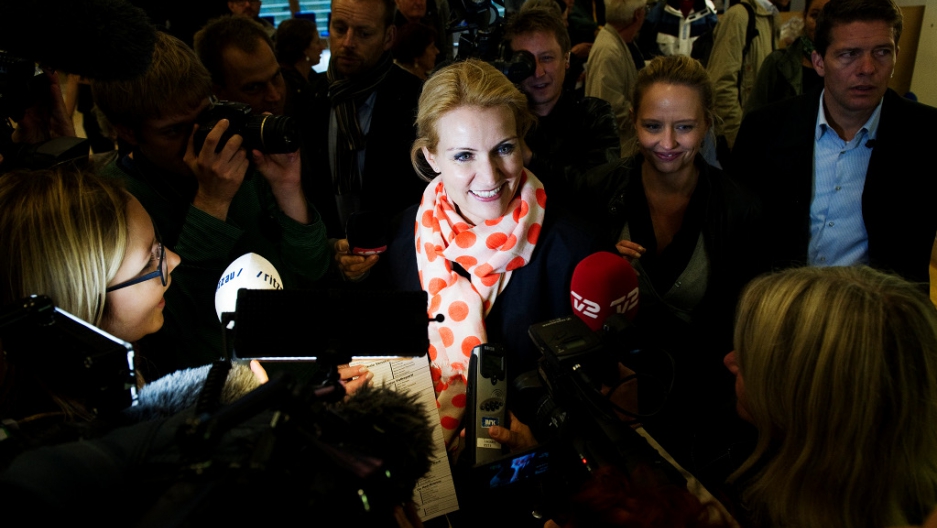 Social Democrats, Helle Thorning-Schmidt speaks as she arrives at a polling station in a school in Copenhagen on September 15, 2011 to vote in the Danish general elections. Danes came out in droves to vote in a general election expected to bring the center-left back to power after a decade in opposition and deliver the country's first woman prime minister.
Credit: Jonathan Nackstrand
Share

COPENHAGEN, Denmark — It’s an inevitable fact of life for female politicians: people are bound to pay more attention to your looks, style and spouse than they would if you were a man.

Hillary Clinton is an obvious victim.

Another is Helle Thorning-Schmidt, Denmark’s woman of the moment.

Ever since last week’s parliamentary election, Thorning-Schmidt, 44, has been engaged in high-stakes negotiations to form a government in Denmark. If, as expected, this savvy and brilliant politician succeeds, she will become the Scandinavian country’s first female prime minister.

She will also likely be the first head of state for whom Google returns the term “naked” (nogen in Danish) as a top search suggestion — as Danes learned from the country’s Ritzau News Agency in August, just as the campaign got going.

She shrugged off the matter.

In 1999, when she was campaigning for her first seat in the European Parliament, her boss at the time, Freddy Blak, gave her the nickname Gucci-Helle, for her handbag habit. When she returned to Copenhagen to lead the centre-left Social Democrats six years later, the name came with her. With her intellectual background, large townhouse in one of Copenhagen’s toniest districts, and penchant for handbags, the 44-year-old has always seemed an unlikely leader for the Danish left.

Blak recalls admonishing her when she was having problems connecting with voters.

“I said, ‘Helle, you must put your finger in the earth and know the people you are talking to,” he told GlobalPost. “You can’t talk to uneducated people and wear clothes that cost more than they earn in a whole month.’”

She looked him up and down, and then shot back.

The incident demonstrates that, elegant as she is, Thorning-Schmidt is much more than a pretty face.

She has shown herself to be a tough and effective negotiator. She used these skills first to bring her flailing party together, and later to forge an unlikely coalition with the free-market Social Liberals and the hard-left Socialist People’s Party.

In other words, she rose to power through sheer power of persuasion.

To do this, she turned her weakness — shallow roots with the center-left Social Democrats — into a strength. As a relative outsider, she deftly played the compromise candidate between the party’s left- and right-wing camps, healing a schism that had crippled it for years. As party leader her weak links to the left allowed her to reach out to the free-market Social Liberals, to form the coalition that last week ousted the Danish centre-right after a decade in power. The ecstatic cheers and chants of “Helle, Helle, Helle” as she came out to greet her supporters close to midnight on Sept. 14 showed that there is real gratitude for this feat.

In reality, it was her coalition partners — the Social Liberals and far-left Red-Green Alliance — that are responsible for the victory, claiming 17 and 12 additional seats respectively; her own party scored a net loss of one seat. Her partners’ new strength will add to the challenges she is facing in the closed-door negotiations on a common coalition program.

The opposition is predicting a debacle. “It will of course be a disastrous situation for Helle Thorning-Schmidt,” Morton Messerschmidt, a leading face of the anti-immigrant Danish People’s Party, told GlobalPost. “We will have a very internally divided government, seeing as it is the most radical and extreme parties that seem to be the big victors. I think we will have elections very soon, perhaps in a year.”

Thorning-Schmidt’s advisors say she hopes to ask Denmark's Queen Margrethe to formally instate her some time before the end of September. Publicly, she has given herself until Oct. 4 to form a government, so she clearly doesn’t expect it to be easy.

Denmark has been hit harder by the financial crisis than any other country in Scandinavia. Thorning-Schmidt urgently needs to get her far-left and pro-free market allies to agree on a balance between stimulus and spending cuts. They face thorny issues such as pension and benefit reform, longer working hours, and tax hikes.

Complicating this is the fact that one of her allies, the Social Liberals, helped draw up the last government’s austerity bill, which will be the first piece of legislation to go before the new parliament.

The left-wing Social People’s Party wants to fight it, and Thorning-Schmidt herself vowed to stop it during the campaign.

The chances are that the parliament will pass austerity, against her wishes.

Voters found Thorning-Schmidt’s alternative plan — centered on a scheme for every Dane to work an extra 12 minutes a day — unconvincing, said Michael Ulveman, a political consultant who was spokesman for Anders Fogh Rasmussen, a Danish prime minister from 2001 to 2009.

“After 10 years, people wanted new faces, but they didn’t buy into the new government’s economic policy.” He estimates that out of Denmark’s 179 new MP’s, 108 are in favor of the former government’s austerity bill. What many voters disliked about the last government was its far-right ally, the anti-immigrant Danish People’s Party. The DPP’s draconian policy affected not only refugees seeking access to the wealthy Scandinavian nation, but also thousands of Danes who have married people from outside the European Union. They have become “love refugees,” forced to live across the border in Sweden or Germany because of laws that prevent their spouses from getting residence rights.

As prime minister, Thorning-Schmidt would face pressure to reform these laws. But doing so is fraught with danger, as many Danes remain uncomfortable with immigration. One in eight support the Danish People’s Party.

Blak believes his protege has what it takes to face her formidable challenges. He says Helle is “very, very clever,” adding that she “has a good political nose and she’s good at negotiation. It will be difficult for Helle, but I’m sure she will be a fantastic prime minister.”

Blak is not Thorning-Schmidt’s only mentor. Her British father-in-law, Neil (now Lord) Kinnock, spent seven years leading the U.K.’s Labor Party against Margaret Thatcher, one of the toughest politicians of the last century.

EUROPE: Headed toward break-up in the euro zone

Thorning-Schmidt met Stephen Kinnock when both were studying at the College of Europe, the elite training center for the European Union’s political class. This in itself doesn’t play well in a country at best ambivalent to European government.

But last year, just as she was talking about a new tax on millionaires, it emerged that her husband, who certainly qualifies as one, paid no tax in Denmark at all. Instead he opted to pay the dues on his generous salary from the World Economic Forum in low-tax Switzerland.

An inquiry concluded that, as he lives in Geneva during the week, this was as it should be. But the episode left a lingering sense that Thorning-Schmidt was not a “real” left-winger.

Her husband disappeared from view throughout the campaign, but the smears kept coming. The confidential report of the inquiry into his tax affairs was leaked in the last days of the campaign. And then, in the days before the election, came stories that her marriage was in trouble, and even that Stephen was secretly gay.

“It is very unpleasant that newspapers print such rumors,” Thorning-Schmidt told Denmark’s Ekstra Bladet newspaper. “I can only say it is not true.”

Being part of the Kinnock dynasty has its advantages though. The elder Kinnock had reportedly advised his daughter-in-law throughout the campaign. He had a lot to teach her. He too took the lead of the opposition in 1983, in the middle of an economic crisis. He too fought a battle to tame the militant left.

He may also have given her lessons learned from his old sparring partner, Margaret Thatcher.

After all, for all the talk of ‘”Gucci Helle,” Margaret Thatcher’s handbags remain the most famous in political history.

So strong a symbol did the Iron Lady’s bags become that, in 2000, when she auctioned for charity a bag she had brought to a meeting with President Reagan at the White House, it fetched $130,000.

In 2005, that's exactly how Thorning-Schmidt got rid of her infamous Gucci bag, auctioning it off and giving the proceeds to charity.

The move succeeded in showing her sense of humor. But it didn’t manage to shake the “Gucci Helle” nickname.