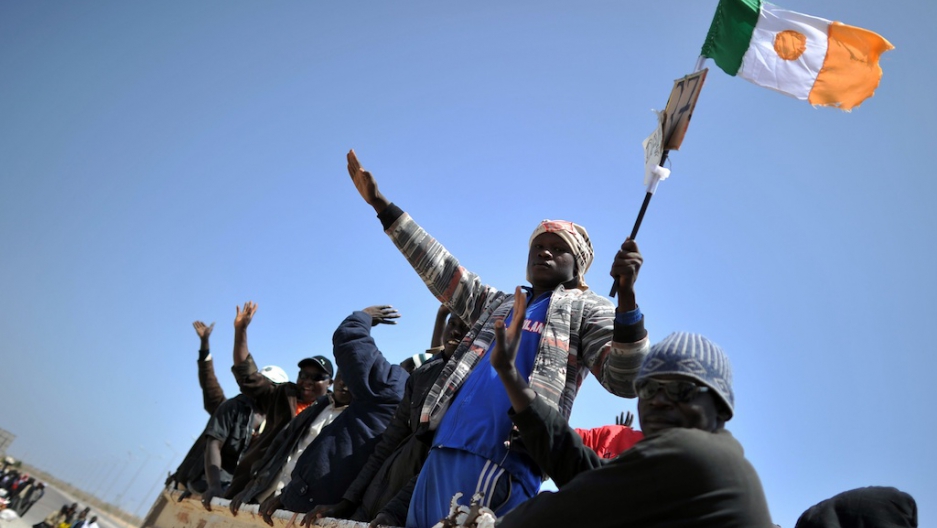 An African migrant holds the flag of Niger as he and others ride in trucks on their way to be evacuated from Libya by an International Organization for Migration (IOM) ship.
Credit: Christophe Simon
Share

NIAMEY, Niger — As Libya’s southern neighbor, separated by almost empty desert, Niger is suffering an unexpected fallout from the civil war to its north: Tens of thousands of migrant workers have returned, joined by a high-profile coterie of Gaddafi loyalists, all seeking a safe haven from the fighting.

When Saadi Gaddafi, son of deposed leader Muammar Gaddafi, chose Niger as his refuge earlier this month, he joined a handful of Libyan generals who had already made the long journey across the Sahara to the desert town of Agadez in Niger’s north. The Gaddafi loyalists remain under a loose form of house arrest (not really detained, but not really free either), while Niger’s government awaits requests for action from the new rulers in Tripoli.

But civilian refugees from the war have also made their way to Niger, adding a humanitarian burden to the more obvious political one.

Mohaman Ibrahim, 37, a migrant worker from the capital city Niamey, spent the last 14 years living in Tripoli. During that time he never went home, he learned to speak Arabic and forgot much of the French he was taught while growing up. He never saw his family, although he did send them regular monthly cash remittances to help towards taxes, school fees, health care and food.

Ibrahim shared a concrete room with another migrant in a poor suburb of Tripoli. He worked in a restaurant, ferrying plates about and cleaning dishes. It wasn’t a great job but it paid $200 a month, he said.

He says he never made any Libyan friends during those years and was subjected to regular verbal and physical racial abuse, but the salary was far above what most Nigeriens can earn at home.

“I wasn’t happy there but I could exist,” he said.

As the war crept closer to Tripoli, Ibrahim understood where it would all end. In the ascendant and bearing down on the capital, rebels were attacking black Africans like him, accusing them of being pro-Gaddafi mercenaries.

Ibrahim said some of his friends accepted $1,000 a week to take up arms for Gaddafi, but in July he fled via Tunisia. Now back in Niger, Ibrahim is relieved to have escaped the war but spends his days idle, smoking cigarettes.

“Here I have nothing, nothing to do, nothing to eat,” he said, describing how he lost all his possessions and savings.

He has wound up penniless in one of the world’s poorest countries and is scarcely able to support himself, let alone the dozens of extended family members who have relied on his remittances for years.

Ibrahim’s predicament is common, according to experts.

“Every month hundreds of millions of [West African francs] are sent here as remittances. Now, not only are they not sending, but they themselves have returned and come with nothing,” said Dan Hassane, a civil-society leader in Niamey.

“The returnees are really a burden on the host communities; it’s a social crisis and an economic disaster,” said Modibo Traore, the head of the U.N. Office for the Coordination of Humanitarian Affairs in Niamey.

This year’s harvest in Niger was poor — only 15 percent of the annual average, says the government — and early warnings of food shortages to come are already being issued. Meanwhile the return of tens of thousands of migrants means there are more mouths to feed and less money to spend on supplementing the harvest.

From Libya: Scenes from heavy fighting in Sirte (Video)

As an example of the crisis, Traore cited the southern city of Goure where remittances have been worth $1.20 per person per week, according to a study, and this has played a huge role in supplementing average annual incomes of less than $2 a day among Niger’s 15 million people.

“That money was used to supplement families’ food, for health care, for education, everything to make a better life in general,” said Traore. “Money was also used to pay government taxes, so government revenue will also fall.”

The number of returnees from Libya is disputed. The U.N. counts 80,000 since the outbreak of fighting in Libya, but the Niger government reckons 210,000 have returned without specifying a time frame for its higher estimate.

Ibrahim fled Tripoli on foot to Zawiya, then by bus to Tunis and from there took a flight to Niamey that was provided by the International Organization for Migration. Most returning migrants have not been so lucky.

Most have had to board a series of buses and trucks to travel from Tripoli to the southern Gaddafi stronghold of Sabha (currently the center of some of the last fighting) and then across the border and the Tenere Desert to Agadez.

The weeklong journey across the desert from Sabha to Agadez is arduous and sometimes deadly. Temperatures soar, there is no shade and there are few places to restock with water, food or fuel.

Niger’s fledgling government has been in office for only a few months and is now facing challenges that were not of its own making, that are beyond its control and that would tax even an experienced and well-financed administration.

“This war has had a lot of consequences for us,” said Marou Amadou, Niger’s justice minister and government spokesperson.

“The worst is not these people fleeing the war in Libya, it is the arms which are neither under the control of the pro-Gaddafi forces or the [new] authorities or any regional government,” Amadou said.

“In this desert we have international criminal organizations, a lot of arms and Al Qaeda,” he said referring to Al Qaeda in the Islamic Maghreb (AQIM), which has kidnapped foreigners in Niger this year, sometimes leading to their deaths. “We need the international community to realize this situation is critical.”

The U.N.’s Traore described a “dangerous cocktail” of arms and unemployment in the northern desert, added to which are fears that AQIM is building ties with Nigeria’s Boko Haram Islamists further south, effectively squeezing one of the world’s poorest regions between two radical Islamist groups.

“In a country where poverty is increasing," Traore warned, "Al Qaeda and Boko Haram may find a fertile recruiting ground.”