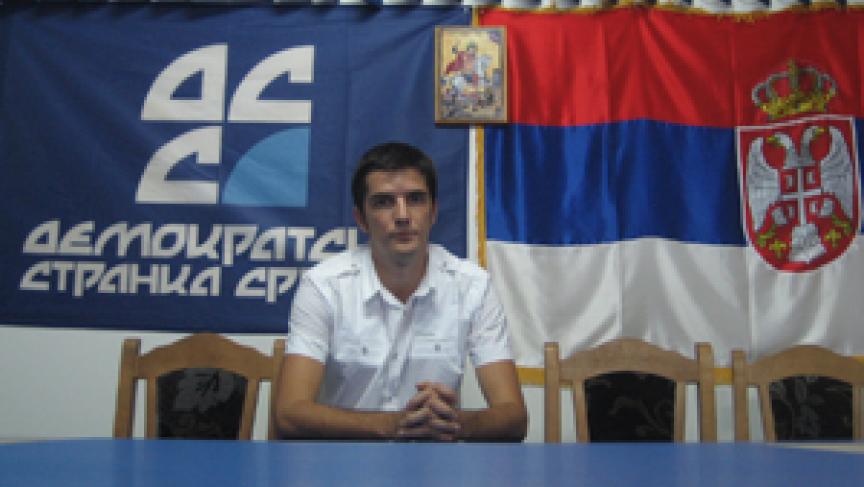 Nemanja Jaksic is a member of the Serbian Democratic Party. (Photo: Matthew Brunwasser)

Share
by Matthew Brunwasser The Albanian-dominated government in Pristina has very little presence here. Institutions like the post office, schools and hospitals are funded and managed by Belgrade. But Serbia wants to join the European Union. And the EU only accepts members who have normal relations with their neighbors. Many countries have made it clear they don't consider Serbia's presence in Kosovo very neighborly. "The pressure by the international community and by Pristina has never been stronger than in the past 2-3 months," says Tatjana Lazarevic, a Serb who works at a community development organization in the divided city of Mitrovica, which marks the beginning of the Serbian-controlled north. Lazarevic says its absurd to even consider cutting off the institutions. Lazarevic says: "Why would anyone dismantle a system which works for 12 years, on the basis of free will of 100 percent of the Serbian population of the north? I would say if the Serbian institutions are dismantled, 100 percent of the people in the north would flee." It's not that Serbs so strongly oppose Albanians running their post office. Controlling institutions is about political power. The wounds from the 1999 war have not healed. Despite the fear and hatred between the two communities, some two-thirds of Serbs in Kosovo live in the south under rule by Pristina. While distrust is high, ethnic violence is rare. Kosovo's form of government was created by the Ahtisaari plan, named after the Finnish Nobel laureate who designed it. It gives strong protections for minorities' rights. Of the 16 Kosovo government ministers in Pristina, three are Serbs. Like Nenad Rasic. "Our only concern as gov representatives, is not to make tension or radical moves that could make the Serbs panic," says Rasic. Many Kosovo Serbs fled after the 1999 war and he's afraid more might leave: some out of fear and some for economic reasons. Belgrade helps Serbs get by in Kosovo through jobs and subsidies. If they disappear, Rasic says, Serbs may also leave for economic reasons. "The only way we can help the Serbs in Kosovo is provide them the benefits," says Rasic. Ahtisaari is based on the decentralization of powers and offers the north limited autonomy. The plan's first step would be to hold local elections in the north for communities to choose their leaders. There are already eight Serbian municipalities in the south, which were elected last year. Voter turnout by Serbs was around 47 percent. Peiter Feith heads the executive body implementing Ahtisaari. He says Serbs in the north haven't yet seen the benefits of participation. Feith says: "We have not yet, because of local resistance, been able to hold elections in Mitrovica North. There are other provisions which would give far reaching autonomy to the Serb community. For instance, they would be allowed to work with Belgrade and get support from Belgrade in the sectors of health and education and there are other things that can be thought of." Serbia's lead negotiator in Belgrade — Pristina dialogue, Borko Stefanovic says: "That's a dream scenario of Mr. Feith, but he's wrong." Stefanovic says Serbia will not stop supporting Serbian institutions in Kosovo. And that the international community is deceiving itself. "First of all, we have no intention to help in creating something called an independent Kosovo," says Stefanovic. "The other thing is that the Serbs in the north would never accept Pristina-based institutions. And they know it." But while the north of Kosovo is mostly Serbian, some five percent of the population is Albanian, like Adem Mripa. He says at some point, Serbia will have to let go. "I believe that Belgrade should promote reconciliation, and persuade Serbs to live equally with Albanians in Kosovo," says Mripa. "They must know that this country will be called Kosovo and not Serbia. I think that pressure on Belgrade from the international community is the only way to promote reconciliation in this part of Kosovo." Kosovo remains a highly charged political issue for Serbs, an underground reservoir of emotional power which politicians can easily tap into. While polls show Serbian voters think the EU and economic issues are more important than Kosovo, no one expects any dramatic moves before Serbia's national elections in April.