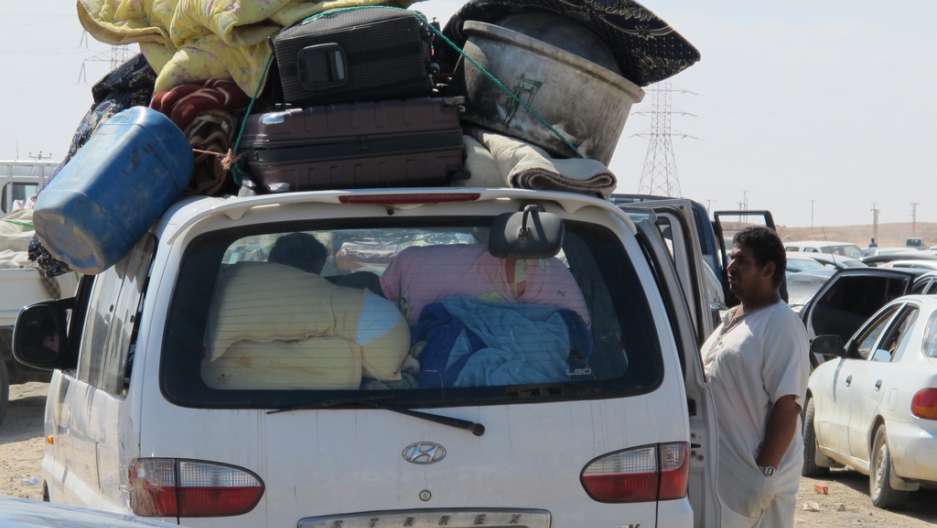 Residents of Sirte flee the besieged city with as many of their belongings as they can carry.
Credit: James Foley
Share

OUTSIDE SIRTE — As rebel forces continue to hold off on heavy shelling of Sirte, civilians are streaming out of the besieged city in anticipation of a further heavy assault on the Gaddafi stronghold.

By early Thursday afternoon, 300 people had left Sirte, according to the manager of a checkpoint charged with registering names and numbers of families leaving. On Wednesday 250 passed through the same checkpoint some 30 miles (50 kilometers) from the outskirts of the loyalist city.

Residents of Sirte spoke of deprivation and fear.

“There’s too many rockets, I’m happy to be gone,” said Mohammed Towfik, 16, who left with his family Thursday. Towfik said some of his teenage friends were still with the loyalists. “They think we would win from the beginning, but when NATO arrived things changed.”

Men from Sirte said they left their neighborhoods only Thursday, over a week into the assault, because it was their first chance.

“Today is the first day the road was safe with no soldiers,” said Ibrahim Sanoussi, 29. “We tried to go out a few days ago, but Muammar supporters forced us to stay by guns,” he said.

Thursday the road was clear of soldiers and Sanoussi left with his family. He said that his brother-in-law had been hit by an explosion in his bedroom, maybe from a rebel munition, days ago.

The conditions inside Sirte are described with a long list of no’s — no electricity, no hospital, no phone service, no except for macaroni boiled in salt water, said Muftah Mohammed, 40, who left Sirte with five daughters and three boys Thursday. Mohammed is a member of Gaddafi’s Gaddafa tribe, but said people in Sirte are not knowledgeable about the revolut against Gaddafi.

“Lots of people look at us like we’re with Gaddafi, but most aren’t,” he said. “I haven’t seen anything but boiled macaroni for a month. Yesterday a woman and child died. The rockets are everywhere. Everyone is hiding in their house … I can’t tell how many families have left.”

Most residents seem to afraid to talk about how many soldiers are left in Sirte or what percentage of the population is still loyal to Gaddafi, but it seems there is a substantial loyalist force.

Between 10 and 15 Grad rockets fell on rebel positions outside Sirte Thursday.  The forces for the new transitional government appeared to be in blocking positions on the roads leading into the center and said they were involved in clashes this morning.

“It’s bad luck,” said Wajdi Ali, a Misrata revolutionary from the Shahid Brigade spreaking from a roundabout leading into the center of Sirte. “I thought today we were going in, but there’s still families inside. The problem is the volunteers and family of Gaddafi who are hiding behind the families, he said.

“A few days ago, families came out when we were shooting and said, please don’t shoot! Then they shot us in the back,” Ali said.

The anger that rebels feel for some who just fled Sirte is palpable. A man waiting in the refugee line outside Sirte said he was originally from Misrata and had been scared to leave Sirte until now, when a rebel sympathizer began yelling at him, “We fought and sacrificed, and you’re scared!”

In the field hospital, reporters were shown the body of a rebel who doctors said displayed the marks of being tortured in Sirte. The man’s body was bruised as if from some kind of binds. “He was shot between the legs and tortured with electricity,” the doctor said, adding he had been kidnapped by uniform soldiers from near Sirte.

Wednesday, 15 loyalist soldiers were captured outside Sirte. Their military identity cards were shown to reporters and rebels said they were being taken to a military prison in Misrata where officials estimate some 700 suspected loyalists are being held.