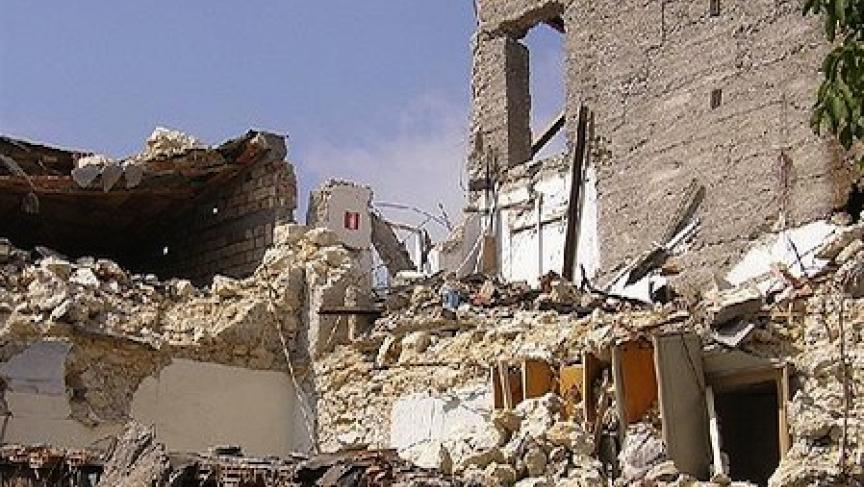 Photo of the destruction after an earthquake in L'Aquila (Image by Wikimedia user Ra Boe (cc:by-sa))

Story by Megan Williams from PRI's The World. Listen to audio for full report.

In an unusual case, a group of scientists went on trial in Italy on Tuesday. They are charged with manslaughter in connection with the earthquake that struck the mountain city of L'Aquila in April 2009. More than 300 people were killed in L'Aquila and the surrounding towns. The prosecution accuses the scientists of failing to properly warn residents of the danger.

Months before the earthquake, smaller tremors rattled the historic Italian city. Worried residents spent a number of nights sleeping outside. They asked authorities for advice. What they got were false reassurances from a committee of the country's top earthquake experts.

At least, that's what the prosecution is charging in the trial of six Italian scientists and a member of the country's civil protection agency. They cite a memo from the committee, and interviews given by committee members in the week before the big quake.

In one now infamous interview, Bernardo De Bernardinis, a civil protection agency spokesman, told a local journalist that the seismic situation in L'Aquila was normal and posed "no danger." In fact, he said the scientific community had assured him that the situation was favorable because the continuous tremors meant a discharge of energy.

Some residents of L'Aquila felt reassured enough to go back to their homes, which is why prosecutors have charged the scientists and De Bernardinis with manslaughter.

The men are accused of "negligence and imprudence" for having ineffectively assessed the risks of seismic activity, as well as giving "incomplete, imprecise and contradictory information" to the public, even though the memo issued by the committee did stress that it was impossible to predict when a larger quake could occur.

Francesco Petrelli, a defense attorney for the accused head of the committee, Franco Barberi, said the scientific committee's role was not to advise the public, only to assess the risk of an earthquake and pass that information on to the civil protection agency. He insists his client acted properly in assessing that risk.

More than 5,000 scientists worldwide have signed a petition in support of the Italian scientists, protesting what they say is basically a trial for having failed to predict an earthquake, a technical impossibility.

But while many seismologists agree criminal charges set a dangerous precedent for scientists working with questions of probability, not all agree the Italian experts acted properly.

John Mutter, a Columbia University professor of seismology, didn't sign the petition in support of the Italians. He thinks the charges go too far, but he said the scientists should be held accountable through fines or public or professional censure.

Read the rest of this story and view slideshow of L'Aquila on The World website.