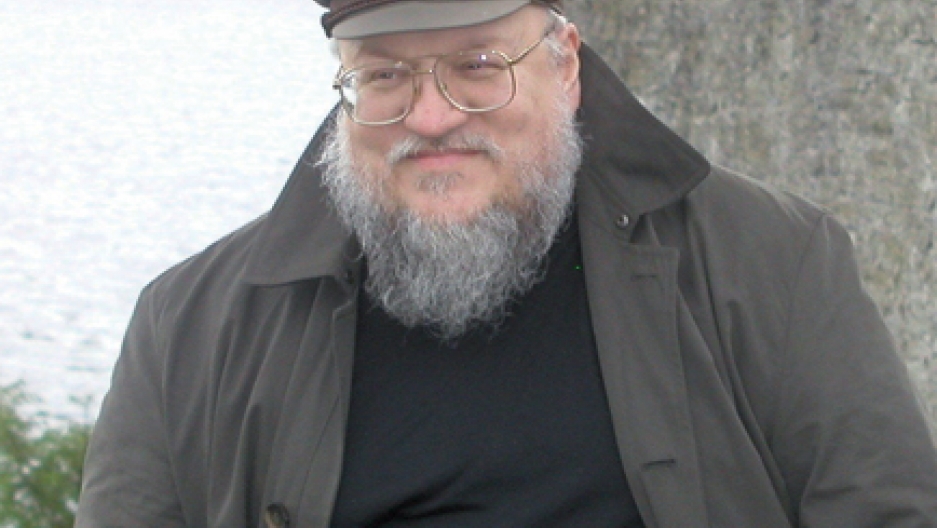 Story from The Sound of Young America. Listen to audio for full interview.

George R. R. Martin is the author of the very popular series of fantasy books called, collectively, "A Song of Ice and Fire." The most recent installment is "A Dance with Dragons: A Song of Ice and Fire: Book Five." The series was recently adapted for the acclaimed HBO show "A Game of Thrones."

Martin has received numerous awards for his writing and was named, by John Hodgman, in Time Magazine as one of the most influential people of 2011.

Hodgman recently interviewed Martin on The Sound of Young America. Below is an excerpt from the interview:

JOHN HODGMAN: It's The Sound of Young America, I'm John Hodgman in for Jesse Thorn. My guest is the George R.R. Martin. He's the author of the series of fantasy novels known as "A Song of Ice and Fire," also commonly known as "Game of Thrones" for the HBO series that is based upon it. In it, members of the warrior brotherhood known as The Night's Watch discuss the mysterious threats that lie north of the enormous Wall which they've been sworn to protect.

One of the things that first struck me when I first found the books was that this was a fantasy world which not a lot of people would fantasize about living in. Not a lot of fantasy aspect to it in the sense that it is set in an alternate world, or made up world.

JOHN HODGMAN: We'll call it a secondary universe, that's a term I came up with for it independently just now. Didn't steal from Tolkien at all there.

It's set in a secondary universe, and it has certain sword and sorcery trappings, although more swords than sorcery certainly in the first book; but, it also is really rooted, grounded, if not sort of mired in the harsh realities of medieval life, and a harsh feudal caste system, where the only medicine around is a kind of poultice and people are routinely seen elderly at the age of 35 because they're dying all the time.

It's not a place or a world or a time where most people would want to live. Why was it important to you to write in that setting?

GEORGE R.R. MARTIN: As I said, I read a lot of different things, not just science fiction/fantasy. One of the things I read a lot of is history and historical fiction. I'm a big fan of historical fiction. I did read fantasy as well. As I read that, I sort of had a problem with a lot of the fantasy I was reading, because it seemed to me that the middle ages or some version of the quasi middle ages was the preferred setting of a vast majority of the fantasy novels that I was reading by Tolkien imitators and other fantasists, yet they were getting it all wrong. It was a sort of Disneyland middle ages, where they had castles and princesses and all that. The trappings of a class system, but they didn't seem to understand what a class system actually meant.

JOHN HODGMAN: Or would mean to the people who are trapped within it, on both the high status and low status alike, it's a kind of a life sentence.

GEORGE R.R. MARTIN: It was like a Ren Fair Middle Ages. Even though you had castles and princesses and walled cities and all that, the sensibilities were those of 20th century Americans. You didn't see that in good historical fiction. There were people who were writing fine historical fiction that really grasp it. In my kind of cross-genre/genre-bending kind of way was to go, you know, what I'd like to do is write an epic fantasy that had the imagination and the sense of wonder that you get in the best fantasy, but the gritty realism of the best historical fiction. If I could combine those two threads, I might have something fairly unique and well worth reading.

JOHN HODGMAN: One thing in the book, which I presume is made out of whole cloth of imagination, is the religions of this world. These are not religions of the primary world that we live in; the world of your novels has several major religions, some minor sects, the continent in which most of the characters spend most of their time have two well developed religious philosophies with a new sect that's coming to the continent and gaining inroads. I was curious as to - - how does one sit down and create a religion?

GEORGE R.R. MARTIN: The religions are made up religions, in that sense, imaginative religions. I based them on real world religions just tweaking it or expanding it a little. The faith of the Seven is of course based on medieval Catholic church and their central doctrine that there is one god who has seven aspects is partly based on the Catholic belief that there is one God but he has three aspects: Father, Son, Holy Ghost. With the Seven, instead, you have The Father, The Mother, The Maiden, The Crone, The Smith, The Warrior, and a Strangers, who's the death figure.

That's the general process for doing fantasy, is you have to root it in reality. Then you play with it a little; then you add the imaginative element, then you make it largely bigger. Like the Wall in my books, of course, was inspired by Hadrian's wall, which I visited on my first trip to the United Kingdom back in the early 80s. We climbed to the top of Hadrian's Wall and I looked north and tried to imagine what it was like to be a Roman soldier stationed there in the first century. At the end of the known world staring at these distant hills and wondering what lived there and what might come out of it. You were looking off the end of the world. Protecting the civilized world against whatever might emerge from those trees. Of course, what tended to emerge from those trees was Scots, and we couldn't use that. So I made the Wall considerably bigger and made it of ice, that's the process of fantasizing.

Read the full transcript of this interview on The Sound of Young America website.