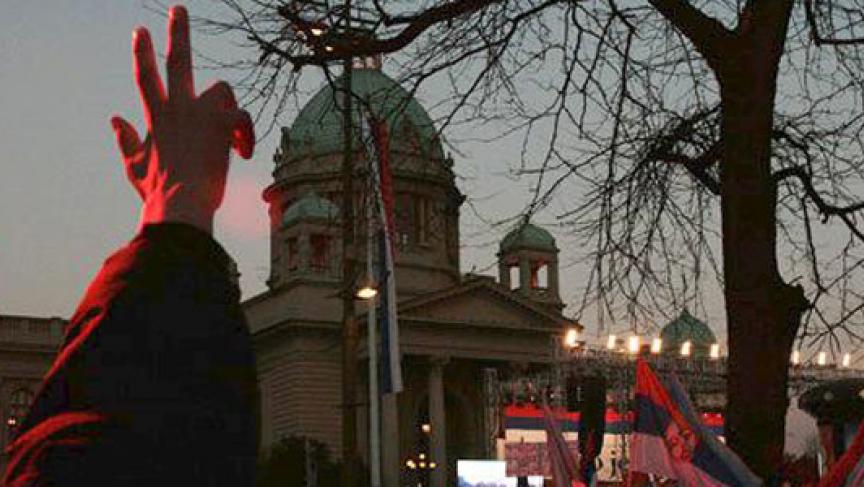 A protest rally in Serbia during the campaign "Kosovo is Serbia!" (Photo: Zakipfc/Wikipedia)

Share
By Matthew Brunwasser The European Union requires candidates for membership to have peaceful relations with their neighbors. Twelve years after the Kosovo War, the governments of Kosovo and Serbia are trying to normalize relations. Serbs' historic sense of victimhood dates back centuries to the Ottoman era. A nun bangs on a wooden plank outside the Serbian Orthodox Christian monastery at Gracanica, one of the Serbs' holiest places. Serbs say the tradition comes from when their Ottoman rulers prevented churches from using bells to signal services. Slobodan Milosevic rose to power in the 1990's by promising to protect Serbs from Albanians in Kosovo. His crackdown stoked an Albanian insurgency. The resulting war left some 10,000 dead and more than a million refugees. And it brought on a NATO bombing campaign. Animosities are still sharp. But both sides may have to overcome their fears and heal the wounds. Serbia wants to join the European Union. And the EU only wants members who have peaceful relations with their neighbors. Just outside the church, Radovan Zdravkovic says Serbs will never feel comfortable with the Albanian dominated government in Pristina. "All the people in the government now in Pristina are mafia and terrorists," says Zdravkovic. "They are all Serb-killers. They are the ones who managed to take power. They were the ones expelling and killing Serbs. What can you expect from such people now? Albanian Kosovars generally see the Serbs' fears as a result of manipulation from Belgrade. And they hope that pressure from Brussels will stop Serbia from interfering in Kosovo's affairs. "It's very clear that progress of Serbia to the EU is linked with the progress in relations with Kosovo," says Edita Tahiri, Kosovo's lead negotiator in Pristina's dialogue with Belgrade. She says Serbia is preventing Kosovo from becoming a normal country by funding separate Serbian institutions here. Tahiri says Serbia is pro-EU in rhetoric alone. "In practice they pose obstacles not only to Kosovo but also to the whole region in terms of cooperation and helping the region speed up the Euro-integration process," says Tahiri. While Europe is becoming a union without borders to trade or travel, the western Balkans are still plagued by anachronistic conflicts. Eighty two countries, including 22 of 27 EU members, recognize Kosovo as a state. It declared itself independent from Serbia in 2008. But Serbia refuses to accept it. And Kosovo can't get a seat at the UN because Russia, Serbia's powerful friend, thwarts it. Kosovo is still partly run by the international community, but is solidifying its institutions with the ultimate goal of EU membership. The macchiatos at the stylish Strip Depot cafe in Pristina are creamy and masterful, rivaling those found in Rome or Paris. For the young patrons here, European integration can't come fast enough. Shkelzen Polisi says that Serbs in Kosovo don't have to worry about their physical safety. They enjoy more civil rights protections than other minorities in most west European countries. He says they're unable to admit the real reason for their angst. "I believe that Serbs in Kosovo got used to being the ones who lead and they just cant accept the new reality," Polisi says. "I think that's the only reason. No other reason." Kosovars want their institutions to get international respect. And they're sensitive to slights to their sovereignty. So the Belgrade — Pristina dialogue is a delicate business. So far, talks have achieved agreements on issues such as freedom of movement, property registration and most recently, customs stamps. But parliamentary opposition Leader Albin Kurti says the international community is pressing Kosovo to give too much away in the interest of normalizing relations with Serbia. "And this is very worrying because our government is very weak and soft," Kurti says. "This paradigm of stability, short-term stability, is suffocating us because Brussels does not have much ambitions for the region, it just wants to keep it stable, terrified that new conflicts might reoccur." Serbia hopes to get an invitation for candidate status to begin negotiations for EU membership at the next European Council meeting, in December. A cable released by Wikileaks reported that German diplomats did not think Serbia would join before 2019.