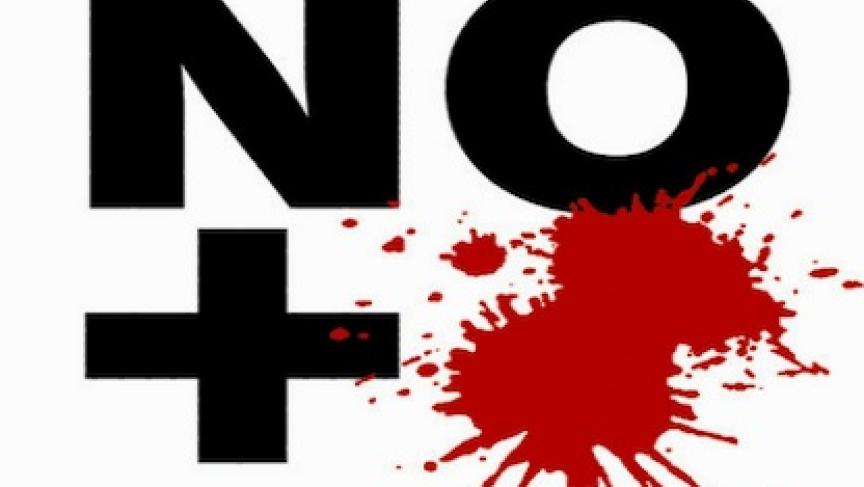 Story by Shannon Young for PRI's The World. Listen to audio for full report.

When a mass movement emerged in Mexico this spring calling for a change of strategy in the drug war, a single image consistently appeared in the protests; the word "no" with a plus sign and a blood stain. It reads "No Mas Sangre" or "No More Blood."

The emblem comes from a graphic campaign launched in January by a group of Mexican political cartoonists.

Cartoonist José Hernández says the campaign was the idea of Rius – the pen name of Eduardo del Rio – who urged his cartoonist colleagues to focus their criticism on the bloodshed. Hernandez says an immediate goal of the campaign was to change the media discourse on the issue of drug war violence.

For years, the dominant narrative – supported by official statements – was that 90 percent of the dead were linked to organized crime. Innocent murder victims were often downplayed as "collateral damage".

But a major shift in public perception of just who the victims are came in March after the massacre of seven youths in Cuernavaca. One of the young men was the son of recognized poet Javier Sicilia. Within a week , the poet was helping to lead a nationwide protest movement that criticized both cartel violence and the government's militarized strategy.

The critical groundwork laid by the cartoonists was evident, not only in the presence of the "no more blood" logo, but also in the views of some of the protestors.

At one rally, a retired woman named Winny carried a protest sign critical of mass media coverage in Mexico. She named the bimonthly political cartoon magazine "El Chamuco" as her preferred media. She says she feels avenged in the cartoons and that the information given in them is clear, concise, and precise – as well as a historical documentation.

As a hybrid of journalism and art, political cartoons rely on symbols and exaggeration to get their point across. This is perhaps why cartoonists are able to communicate certain ideas that print journalists either avoid or only touch on with subtleties.

"In Mexico, the language of politics and journalism is very cryptic," says cartoonist Antonio Helguera. "If you don't already have a background in the given subject, it's very difficult to understand what's happening. I think, that's why so many people distance themselves from politics. In my own experience, I found that when I opened newspapers, the key to unlocking the messages were the cartoons. If you go by what the newspapers tell you directly, the messages are empty. Cartoons provide the keys to decode these messages."

The drug war in Mexico has claimed well over 40,000 lives. Some estimates now put the toll at 50,000. Using a humorous medium like cartoons to address such a deadly issue can seem like walking a fine line, but Helguera says the limits are clear.

"We don't direct our work against the victims of this war. We're not laughing at them at all – quite the opposite. We focus our ridicule on the creators and promoters of this war. I'm referring to (President) Calderón and the secretaries of the armed forces and marines, the chief of the federal police and all those people. It's against them. Therefore, there's no risk of it turning into ridicule of victims because we never direct our criticisms against them – not even in the cases in which the victims were probably criminals – because, in the end, they're dead. It's just something you don't do."

Aside from covering current events, Mexican cartoonists have also assumed the role of popular educators. Mexico's most influential cartoonist, Rius, has authored and illustrated more than a hundred books on topics that include philosophy, political theory and history – with a knack for making dense subject matter easily digestible.

In his 50-plus-year-career, Rius has earned a certain celebrity status within Mexico. A recent book signing in Mexico City drew a crowd of close to a thousand readers who lined up around the block.

Laura Flores – who stood in line for an hour and a half to have her book signed – says three generations of her family read and enjoy the works of Rius. She describes his books on Mexico in particular as excellent alternatives to the views and information available on television.

It's precisely this type of education and self-awareness that cartoonist José Hernández says he hopes for as a larger outcome of the "No More Blood" campaign "because a society that's informed and organized is less susceptible to manipulation and abuse."

Read the rest of this story and watch a cartoon slideshow on The World website.

You can see a longer version of this slideshow and hear Shannon's accompanying radio report at www.theworld.org.

Shannon's radio story was first broadcast on The World on 19 September 2011.