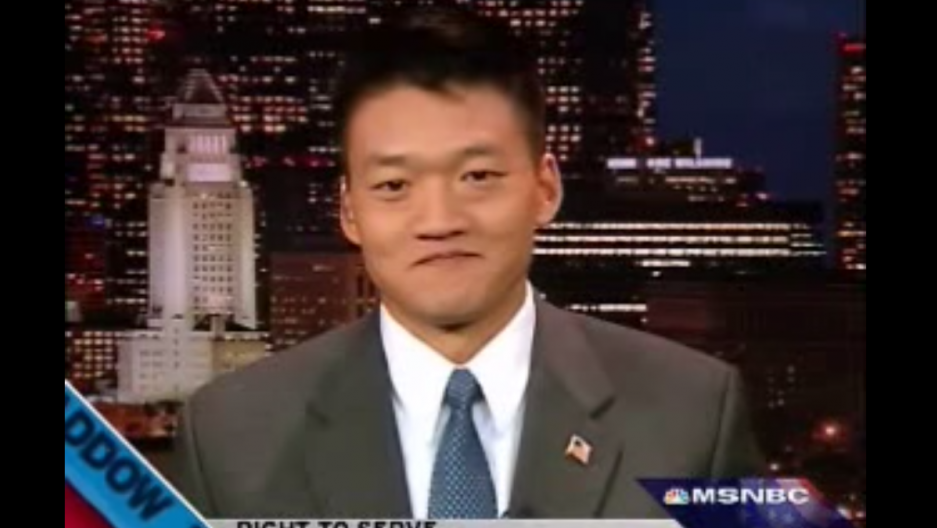 NEW YORK — When The Rachel Maddow Show came calling to discuss his public defiance of “Don’t Ask, Don’t Tell,” Lt. Dan Choi answered the call of duty for what would become an all-consuming public role as the face of change within the U.S. military.

On MSNBC's Maddow Show, the fresh-faced Choi made his debut on national television with three powerful words which he spoke while staring directly into the camera: “I am gay.”

That sentence, stated publicly, broke Army regulations and immediately put the decorated Iraq war veteran’s job on the line. They were just three words, but they sparked an international media firestorm, leading Choi — living with his parents at the time — to perform 18-hour days filled with interviews, appearances and lobbying. They also galvanized a movement that Tuesday ended with the repeal of “Don’t Ask, Don’t Tell,” which like so many army regulations has its own acronym, DADT.

“I didn’t know if I could say no to anybody so I just did every interview,” Choi said of his first months as an activist.

He was using his father’s phone, who asked the newly minted superstar, “Are you turning my house into gay headquarters?”

Choi’s mission to find himself in California after returning from 18 months serving in Iraq had yielded an answer: activism.

“Everything came together,” he said. “Being a veteran, an Asian minority, an Arab linguist, gay, Christian. I always thought I needed to compartmentalize my life. When I became an activist, there was finally this coalescence of all of these identities. It was like a symphony.”

The Maddow Show was where he first played the first few notes of that symphony for an audience.

It was March 2009 and West Point’s LGBT support organization, Knights Out, had just been founded. Sue Fulton, a former Army captain, a West Point graduate and an openly gay woman, helped prepare him for the interview.

“Dan became a young man in the eye of the storm of ‘Don’t Ask, Don’t Tell,’" recalls Fulton. “From the get-go, he was charming and quick, exceptionally good at getting his message across.”

Knights Out’s very first press release was a declaration by more than 35 members, including Choi, outing themselves. He was booked on Maddow three days later.

But the journey to this point in fact began many months earlier when he first returned from Iraq and fell in love. He began to realize the could no longer live in the closet. He’d been lying to friends and family for years, constructing elaborate profiles of women he was supposedly dating. His Army buddies had no idea about his sexuality, and he liked that just fine.

“I was closeted the entire time. I never wanted to come out. In fact, I thought the military’s ‘Don’t Ask, Don’t Tell’ policy was a good thing for me because I could hide behind that.”

His new boyfriend introduced him to politics and LGBT activism. In 2008 Choi celebrated his first Valentine’s Day with a partner.

“I didn’t even know about Obama and ‘Don’t Ask, Don’t Tell,’” Choi recalls. “I voted for him because he was black. I wasn’t even that liberal in the military. I didn’t really have political views.”

But his time in Iraq began to turn Choi’s mind against the American war effort there. Corruption and mismanagement of the rebuilding process was rampant, and as a member of the Commanders Emergency Response Team (CERP), Choi himself had the authority to vet and authorize contracts with almost no oversight. He often paid cash.

“Every week I would fly from Green Zone to the ‘Triangle of Death’ area and then pass out money,” Choi explained, his ready smile on display. “I’d have a million dollars in hundred-dollar bills in my backpack. I was like, ‘Wow, I have more than my life is worth.’”

By May, two major forces in Choi’s life were waging war on his psyche. On one hand, he had a military career he was fully dedicated to. On the other hand, he had met the love of his life but most of his inner circle still didn’t know he was gay. So he started telling them.

Choi’s life started to unravel. The twenty-something war veteran took to sleeping in his Jeep because his boyfriend — not out to his own parents — didn’t want to live together.

“I gave up my career, I gave up my Arabic use,” Choi said in his gentle, rapid tone, punctuated by hearty laughter. “I’m going through this horrible roller coaster of PTSD, I’m eating bananas and tuna fish every day. My hair is falling out, I’m pissing in a bottle, I’m going poop at the Starbucks.”

Seeking help, Choi scoured YouTube for insight from prominent gay authors like Dan Savage. He educated himself about anti-gay evangelicals like Pastor Rick Warren, who delivered the invocation at President Obama’s inauguration and had inflamed the gay community with condescending remarks about homosexuality. Choi entertained but ultimately declined lucrative offers from the private sector in Iraq. And finally, he broke it off with his boyfriend.

By the end of 2008, Choi was ready to take his biggest leap yet. He would go home to California and come out to his parents.

His mother let him know at an early age that he was expected to marry “a nice Korean girl.” The family moved frequently to accommodate Mr. Choi’s missionary work and Dan dreamed of becoming a leader.

“I thought from an early age that I wanted to be an engaged citizen and show very publicly that I was willing to be a part of society, a sort of patriotic assimilation through the military, but still holding on to my Asian-ness,” Choi said. He ran the gamut of extracurricular activities: community service, Kiwanis, Rotary Club, Key Club.

He was inspired by Steven Spielberg’s World War II film “Saving Private Ryan” and decided he would enlist in the military.

“I was growing up and not having any Asian men on TV or role models in the community,” Choi says, riffing joke after joke about the way his mother tried to push him toward a life oriented around having children. An orphan of the Korean War, she didn’t support his enlistment.

“She didn’t want any of her sons dying in battle,” Choi recalls.

Choi moped around his family home during the last weeks of 2008, unsure about how to come out to his parents. In January, he did it.

“I finally just told my mom one morning. I said, ‘Will you love me? I have something I really want to tell you.’ And she said, ‘Of course I’ll love you,‘” Choi recalls, his voice growing soft. “And I just said, ‘I’m gay.’ She said, ‘That’s not real but I love you anyway.’”

But that was not the final word. Choi lived at home for six months, trying to give them time to embrace his identity, to do some soul searching and to reassure them that he was alright.

“I wanted to start all over,” he said. “I was like, ‘Fuck this Army stuff that I had done. I just want to see what my purpose is.’”

Still, he says, his parents couldn’t bring themselves to truly accept that their son was gay.

But Choi’s work — and his strict ideology — has carried steep costs. He has not spoken to his parents for months.

“I told my mom: ‘If you won’t come to my gay wedding then I won’t come to your straight funeral. I’m doing this so you don’t die a homophobe.’” He elaborates: “That’s how you love someone. I can’t forgive someone when I’m not in a position to forgive. They have not acknowledged that they are wrong.”

Choi’s friends and confidants have often challenged him on his hard-line approach to activism, but he is not one to budge. He has also irritated a number of people within the LGBT rights movement with a combination of stubbornness and self-promotion. As a combat veteran considering reenlistment, Choi doesn’t have many friends in the anti-war community either. And both he and his critics agree that he has played the role of “attention whore” to further his cause.

“When people complain about Dan, I have to remind them, for good or for ill, there is no compromise in him,” says Fulton, adding that whatever ideological disagreements she may have with Choi, there is no question in her mind that DADT would not have been repealed without his work.

Given his approach, it is not too surprising when Choi says he plans to cancel his Social Security and remaining disability benefits, leaving himself without a good way to pay for treatment of his battlefield disabilities, which he says may include mild traumatic brain injury. He’s also declined to set up a legal defense fund.

“I want the government to force me to go to jail,” Choi insists. “I’m not going to let them take the easy way.”