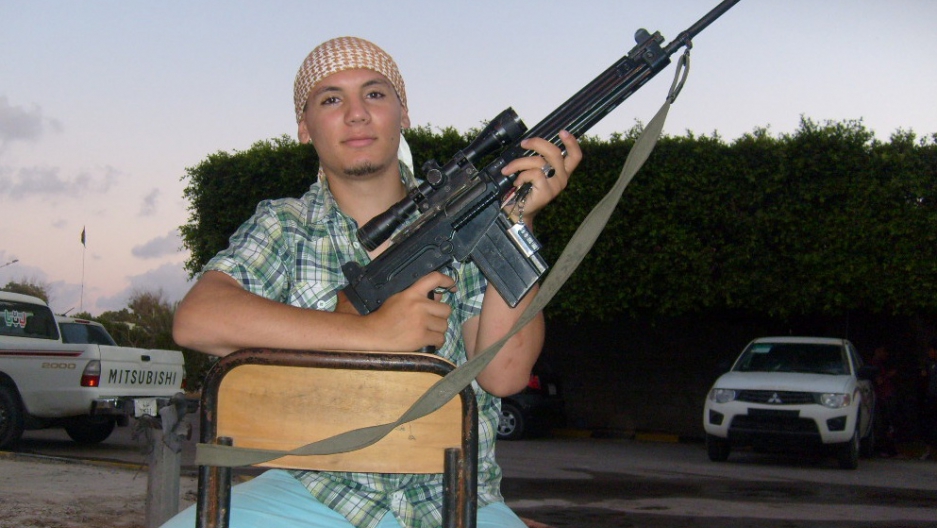 He can feel the vibration of the bombs that fall around him, but this member of Libya's rebel forces cannot hear their explosions.

Sati can see the smoke and flames from his gun as he fires at Muammar Gaddafi's soldiers, but he cannot hear the sound of the bullets. Nor does he have a voice to speak of the death and violence he has witnessed during this uprising.

Sati is one of Misrata's many determined fighters, praised for his courage and quick thinking on the battle field. He now heads a unit of 86 men. What sets them apart is that they are deaf.

"In the early days there were not so many men fighting," Sati said. "I wanted to show everyone that we needed to get out there; show the people I can't hear, I can't speak, but I can fight. If I could do it, they had no excuse not to be out there, too."

Of the 86 members of the Deaf and Mute Brigade, only 7 can hear, and they are fluent in Libyan sign language and act as interpreters for the others. The majority, like Sati, were born with their condition. Others have lost their hearing later in life through injuries or disease.

None of these men are expected to fight, but many, including Sati and 18-year-old Abubakar Mustafa Awene volunteer to fight every day. They are distributed among the other units to fight alongside those who can hear.

"It’s not difficult to fight, but there is a lot of danger,” said Awene. “Rockets fall around us constantly, but if I die I will go to heaven because I am doing what is right."

The men who fight with Awene speak highly of his bravery and dedication.

Without the ability to hear, other senses often become more acute.

"People rely too much on sound," Sati explained. "They are not very observant."

Sati recounted one occasion when he was fighting with 10 other men in the early days of fighting on Misrata's Tripoli Street. As they entered the basement of a shop, Sati's sharp vision spotted a tiny movement through a corner window. Motioning the others back, he took aim with his AK-47 rifle, killing a Gaddafi soldier seconds before he released a grenade into the room, saving all those with him.

Now manning a 14.5mm mounted gun, Sati says the other advantage the men in his unit share is that when operating heavy weapons, they have no problems with the noise.

Other unit members run a number of checkpoints around Misrata and work security for events within the city. This week, several members were chosen to form the security team for the visiting leader of the National Transitional Council, Mustafa Abdel Jibril, who praised them for their courage and impressive work for the revolution in an emotional meeting with members of the group.

This newfound acceptance and support has given the men, who were often discriminated against and even feared under the Gaddafi regime, confidence and fulfillment, said Mohammed Hussien Gabag, the brigade's spokesman and main translator.

Under the old government there were few education and employment opportunities for the deaf, said Gabag, who can hear but is fluent in Libyan sign language. The community had no education about their condition, which meant that understanding and acceptance was low. The men were highly segregated from society. Even the sign language they were taught is unique to Libya, limiting their ability to communicate abroad.

Gabag had been trying to assist the men to form an association since 1992 but their requests were constantly delayed or refused. They were not granted permission to meet together under Gaddafi's system, which feared unity and alliances among its citizens.

The revolution's start was a period of fear and confusion in Misrata, a city that quickly came under attack and siege by government forces. With limited information on the dangers outside, most of the men say they were afraid to leave their homes. But as a united group, they found courage and purpose, cementing their role as determined rebel fighters.

"When we first requested to form this unit, no one wanted to back us because they were afraid for us," Gabag said. "But they saw the hard work of our people and were surprised by the number of members. Now when people meet us at the checkpoints, we get a great reaction because they see the efforts we have made to help the city."

Now the deaf group has its headquarters in the Misrata building that once housed Gaddafi’s secret police. Gabag says he was once held overnight in one of the building's underground cells. There he was threatened, beaten and attack dogs were set on him before he was released without charge the following morning.

Two of the men say they had been approached by Gaddafi's intelligence agency on several occasions and were asked to spy on the deaf community to monitor anti-government conversations that could take place silently via sign language.

The headquarters is now colorfully painted in red, black and green, the colors of the new government of the National Transitional Council, with slogans of freedom and Libyan unity. Hanging on the office walls are photos of 52-year-old Atiyah Aseid, a prominent fighter among the deaf group who was killed in a battle on Tripoli Street in Misrata.

Several of Aseid’s children are members of the unit.

“My father was a good man,” said Mohammed Atiyah Aseid, who works the night shift on one of several checkpoints run by the group. “My heart is proud because he died for Misrata and Libya.”

Several other deaf members have been injured in the fighting, including Sati, who was struck by shrapnel twice and hit in the torso by a 23mm bullet. Despite that injury, he returned to the front three days later.

With his background working in a steel factory, Sati at first volunteered to fix weapons for the soldiers.

"I saw them heading out to battle. Some returned. Some didn't. Others came back injured. They clearly needed more men," Sati said of his time spent working in the weapons factory.

After several days he made his decision. As he left the house that first day dressed in combat gear with a gun in hand, the father of five says his wife tried to block the doorway. Despite her tears and pleas, Sati said he knew where he was needed most.

Awene, with bright young eyes and an innocent smile, beamed as he loaded his AK-47 and got ready for battle. He said he is determined to continue the fight to the end.

"I will hold my line or advance until it is over," said Awene. "I will never back down."