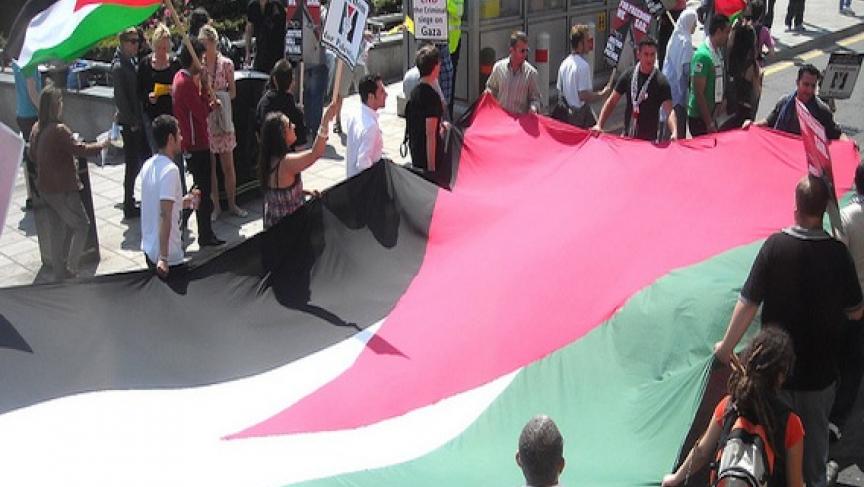 Photo of a protest for Palestine (Image by Flickr user Feral78 (cc:by))

The upheavals of the Arab spring are high on the agenda at the United Nations General Assembly, getting under way this week, but another issue is getting even more attention.

Palestinian president Mahmoud Abbas plans to seek UN recognition for a state of Palestine despite what he's called "tremendous pressure" to back down.

Israel wants the Palestinians to return to direct negotiations. Both sides make their case before the UN this week.

The stated policy of the Israeli government actually favors what the Palestinians say they ultimately seek from the United Nations: An independent state of Palestine living side by side with Israel. Where the Israelis have objections, however, is on how to get there.

Danny Ayalon, Israel's deputy foreign minister explains: "Our objection is two-fold. First of all, this is against all the agreements, the signed agreements between us and the Palestinians. The solution can only be found between the parties, negotiating together and no side will change the status by going to a third party of to the United Nations. What faith can we have on a word or a written signature so this is something of principle?"

And second, Ayalon said, the Palestinians are putting the cart before the horse by ignoring the unresolved questions that must be worked through in negotiations with Israel.

Israel said peace talks between the two parties are the only way to achieve a two state solution, not through unilateral recognition by UN member states. Israeli journalist David Horovitz said Palestinian actions in New York are dangerous, bcause they could be detrimental to the peace process.

From Israel's perspective, a UN resolution on Palestinian statehood would have to include some obligations on the state of Palestine. For example, he said, Palestine would have to renounce conflict with Israel and the right of return for refugees.

"The concern has been that the resolution addresses none of Israel's existential concerns about a Palestinian state," Horovitz said. "And therefore what will happen is that the Palestinians will claim ostensible international endorsement for uncompromising positions which actually stave off the likelihood for finding viable terms for compromise."

But not everyone in Israel is so alarmed about the Palestinian campaign for UN recognition as a state.

"I think the most interesting aspect is that this really does stand to change the balance of conflict dynamics in the region," said Dahlia Scheindlin, a lecturer at Ben Gurion University.

Rather than treating the Palestinian effort in New York as a threat, she said Israel might be presented with an opportunity for positive change in Palestinian society.

"The most optimistic scenario gives them a lot to look forward to, a lot of burden of proof to show they are non-violent, embracing peace and increasingly democratic," Scheindlin said. "And if they embrace that opportunity and really try to leverage it, I think we can really see a different kind of Palestinian community in the next few years. Which gives Israel a little more incentive to treat it as an equal partner and maybe even make the kinds of concessions we'll eventually need to make to reach some sort of formal agreement."

Israeli officials have hinted that they could punish the Palestinian Authority for going to the UN by withholding tax revenues. Members of the US Congress are threatening to cut off millions of dollars in American aid to the Palestinians. But Deputy Prime Minister Dan Meridor said today that Israel's government has not yet decided how to respond to a Palestinian victory at the United Nations.

"We hope we'll not reach that point. But if we reach a point where we'll have to decide what our reaction will be," he said. "I don't see any use in airing threats now. I don't need it. I don't think it will help anybody now."

Meridor acknowledged last-minute efforts to dissuade the Palestinians from going through with their plans for seeking recognition as a state. But he would not give any details. He repeated the Israeli offer to re-start negotiations with the Palestinians any time. Meridor said the offer would still stand after this week, whatever happens at the United Nations.