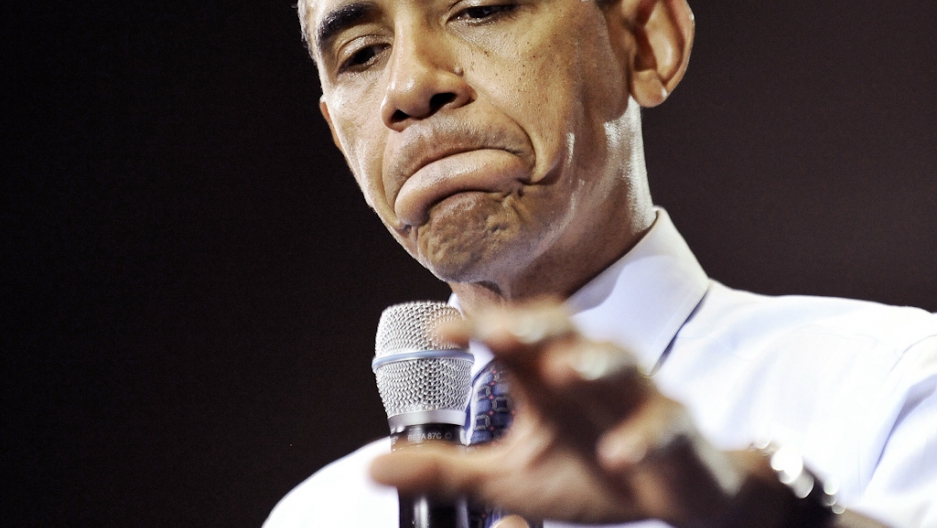 US President Barack Obama speaks during a Town Hall meeting on the ongoing efforts to find a balanced approach to deficit reduction at the University of Maryland in College Park, Maryland, on July 22, 2011.
Credit: Jewel Samad
Share

BOSTON —Is this the end of the American dream as we have known it?

Forgive us for even posing the question, but it’s impossible to avoid these days when you look across the American landscape and see it littered with an unprecedented array of domestic and international challenges. And when you look to Washington for the courageous, principled leadership the country desperately needs, you find little to restore your faith.

With two wars occupying our military forces, with traumatic change in the Arab world, with our close ally Israel more isolated than at any time since its founding, with Europe in the grip of an unprecedented financial crisis, and with a resurgent China challenging America for global leadership, we have ample cause to worry deeply about the international scene and our role in the world.

And yet America’s most urgent problems are right here at home: 25 million people either with no job at all or who want to work more hours but can’t find them in a weak economy that is barely growing. Most people believe we are actually back in recession even if the technical data do not yet confirm what the average citizen already knows to be true.

More from Philip S. Balboni: Headed toward break-up in the euro zone

Last week, the U.S. Census Bureau released some sobering figures about income and poverty in America that give further voice to a growing awareness that many people in this country are slowly sliding backwards. The American dream of advancement and opportunity will always live as long as there is an America but we need dramatic changes in public and private leadership to breathe life back into this once-glorious emblem of the United States.

Census information shows that the nation’s poverty rate rose to 15.1 percent in 2010, the third consecutive annual increase, with 46.2 million people in poverty. That’s the largest number of our citizens in poverty in the 52 years these estimates have been published. Moreover, median household income declined 2.3 percent last year over 2009. It’s down 6.4 percent since 2007, the year before the Great Recession of 2008/2009 began. Median income is also 7.1 percent below what it was in 1999. That’s a lost decade — and more!

When President Bush took office on Jan. 20, 2001, our government had a healthy budget surplus and the national debt was not a subject of discussion. President Bush proposed massive income-tax cuts, which were passed by Congress in 2001 and then again in 2003. These tax cuts removed trillions of dollars of revenue from the United States Treasury and, along with two wars and rapidly increased spending for entitlements and health care, set the stage for today’s extraordinary fiscal crisis.

Few may recall the debate from the late 1960s when people asked whether the country could afford both guns and butter, meaning whether America could afford both the Vietnam War and the expansive social programs of President Lyndon Johnson. The answer was no then, and it’s still no today in the very different world of the early 21st century.

On Dec. 17, 2010 President Obama made one of the biggest mistakes of his presidency when he signed legislation extending the Bush tax cuts for two more years until 2013. Obama believed then that compromising with the Republicans in Congress would set the stage for further cooperation. He also did not want to raise taxes on all Americans just as hope glimmered that the economy might be rebounding.

Unfortunately, he was dead wrong on both counts. The Republicans clearly despise President Obama and they intend to give him no legislative victories. The economy has gone on to sputter and then stall — taxes or no taxes. According to the Congressional Budget Office, the extension of the Bush tax cuts will add $3.3 trillion to the national debt by 2013. Had President Obama held his ground the economy might be slightly worse off than it is today but there would be no debt crisis and no budget crisis.

Instead, we had to bear witness to the humiliating August spectacle of the President of the United States and the Congress locked in an ugly war of words over raising the national debt — a spectacle that badly damaged confidence in America both here at home and around the world. This week the new Congressional “super committee” charged with making at least $1.2 trillion in long-term debt reductions meets again in Washington. The 12-member committee, which consists of six Democrats and six Republicans, has an unenviable job.

President Obama outlined how he would like the committee to approach debt reduction in a speech at the White House on Monday. He called for a combination of spending cuts and tax increases designed to reduce the federal deficit by more than $3 trillion over the next 10 years. Half of that would come from closing tax loopholes and imposing tax increases on wealthy Americans and on businesses. It also includes nearly $1 trillion in spending cuts in Medicare and Medicaid and other entitlement programs.

The president made it abundantly clear that he would veto any proposal that depended solely on spending cuts. “I will not support any plan that puts all the burden for closing our deficit on ordinary Americans,” Obama said.

But the president’s plan is dead on arrival. Last Thursday House Speaker John Boehner made it clear in a speech of his own that tax increases, as part of the deficit reduction plan, would not be accepted by the Republican controlled House of Representatives. “It’s a very simple equation,” he said. “Tax increases destroy jobs.”

The super committee must vote on a plan by Nov. 23 and Congress must take its own vote by Dec. 23. Given the apparent and hard-edged differences a compromise solution seems virtually impossible. The rules set up for the deficit reduction process impose a trigger on Jan. 15, 2012. If there is no Congressional mandated plan, then $1.2 trillion in automatic spending reductions will begin to go into effect, with the cuts coming equally from domestic programs and national defense. That’s a dangerous outcome that will please no one and is sure to harm many vital national interests.

What makes the current situation especially tragic is that America’s problems are solvable. The American private enterprise system has plenty of capital to reinvest and to grow the economy again. But business will not invest to any meaningful degree until it regains confidence in the future of the country. More than anything else, this is what is holding back the U.S. economy. If our national leaders would only work together on a sensible deficit reduction plan, then confidence could be restored and new investment — by both private enterprise and by the government — could begin to flow. And we can begin rebuilding the American dream.

Philip S. Balboni is Chief Executive Officer and Co-Founder of GlobalPost and writes a regular column on international affairs.