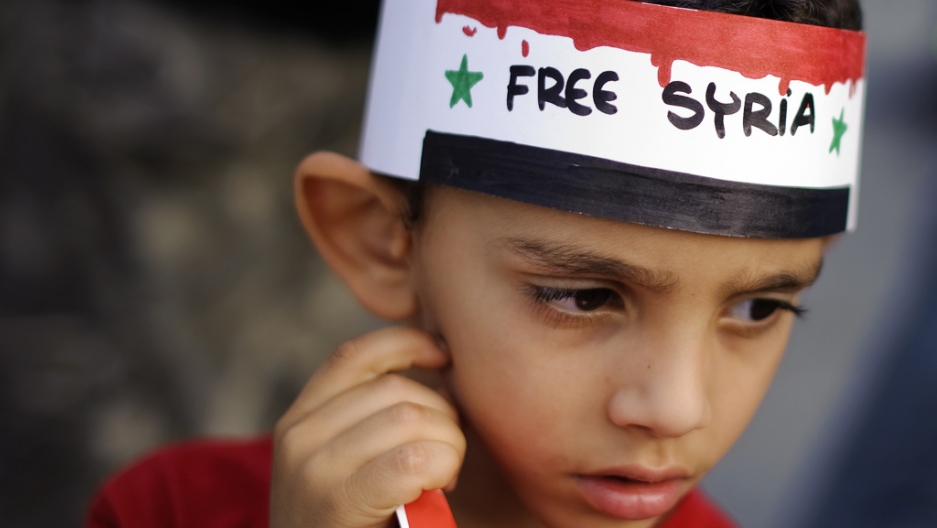 A boy wearing a headband reading 'Free Syria' looks on during a 'Jasmin march for the Syrian people's freedom' that gathered about 300 activists, including Syrians opposed to President Bashar al-Assad's regime living in Switzerland, on Sept. 17, 2011 in Geneva.
Credit: Fabrice Coffrini
Share

BEIRUT, Lebanon — Alarming new statistics from human rights researchers in Syria show that more than 5,300 people are now believed to have been killed since the uprising began six months ago, roughly double the current United Nations estimate and three times the Assad regime's official tally.

In a new report, Avaaz, the global campaign group and its partner Insan, a leading Syrian human rights organization, say they have verified the names of 3,004 people killed, while an additional 2,356 people have been registered as dead, but have not yet been verified.

All but 300 of the casualties are Syrian civilians killed by Syrian President Bashar al-Assad’s security forces, the rights groups reported.

From March 18 to Sept. 9, a team of 60 human rights researchers worked with Insan to verify the names of 3,004 people killed in over 127 locations across Syria.

In line with international protocols for recording casualties of conflict, each case was triple sourced, with Insan researchers confirmed the deaths by speaking directly to a family member and two other contacts, such as friends, community leaders, clerks or imams of mosques.

The further 2,356 names have been recorded as killed, but Insan researchers have not yet been able to triple source each case as the deaths were either reported in the Syrian state media or the bodies were taken away following injury or death and later not acknowledged by the authorities.

The total figure of 5,360 people killed is roughly double the current figure of 2,600 given on Sept. 12 by the U.N.’s human rights agency, UNHR, while Amnesty International has documented the deaths of 2,121 people, not including members of the security forces.

The Assad regime acknowledges only 1,400 casualties.

“We knew the official numbers were way below,” Avaaz’s Henrietta McMicking told GlobalPost. “The 3,004 names have been verified, while we know that the 2,356 additional people are definitely dead, but we have not been able to verify their names under our stringent criteria.”

Avaaz said 327 of those bodies never found have been either reported as detained, forcibly disappeared or injured and kidnapped.

The fate of another 3,000 cases of Syrians forcibly disappeared is unknown and their numbers are not included in this death toll, meaning that more than 8,000 Syrians are now believed by human rights researchers to be either dead or missing since the crackdown on pro-democracy protests began in mid-March.

The new statistics on Syria were released as 37 humanitarian and human rights groups launched the Charter for the Recognition of Every Casualty of Armed Violence, which demands casualties of armed conflict are promptly recorded, correctly identified and publicly acknowledged by states.

Though the recording of casualties is binding on states and parties to a conflict under International Humanitarian Law, in practice few, if any, do so.

Since the invasion of Iraq in 2003, for example, neither the United States nor United Kingdom militaries, who led the offensive, have kept a public record of civilian casualties. Instead, volunteers with the Iraq Body Count, one of the nongovernmental organizations supporting the new charter, have carefully documented about 110,000 civilians killed by military or paramilitary action in Iraq since the invasion.

Hamit Dardagan, co-founder of Iraq Body Count and co-director of the Every Casualty program at Oxford Research Group, told GlobalPost that accurately recording casualties can play a role in post-conflict reconciliation.

“It is important that the truth is recognized by all sides. We do not just record the deaths, but also the circumstances,” Dardagan said. “This often points to the perpetrator.”

While the new Syrian death toll does not yet include detailed information on the circumstances of each death, the breakdown of the statistics points very clearly to a targeted campaign by Assad’s security forces of shooting to kill protestors.

Of the verified civilian deaths, 60 percent were recorded as shot in the upper part of their bodies, either the chest, neck or head.

This correlates with accounts given to Human Rights Watch from five defected soldiers and members of security agencies that they had received explicit orders to shoot at protesters.

In May, Amnesty International released a selection of footage of Syrian civilians shot in the head, which the organization said pointed to a “shoot to kill” policy being used by the security forces to quell anti-Assad protests.

GlobalPost has spoken to a defected Syrian sniper from the army’s Division 47 who said he had received direct orders to shoot to kill the protestors in Izra, 30 kilometers northeast of Daraa in late April.

GlobalPost spoke twice to the soldier by phone from his exile in Turkey and saw a copy of his military ID, though agreed for his own security not to reveal personal details.

“Being told by officers to kill peaceful and unarmed civilians is the most brutal thing that ever happened to me,” he said.

“We were ordered to aim for the head or heart from the beginning. We were not given specific numbers but told to kill as many as possible as long as there were protests.”

Among the verified deaths, the Avaaz report found that 148 children had been killed, the majority killed by gunshots to the upper body. The report also said that 16 of the children had suffered severe torture in detention before their deaths.

The best known case of a child tortured and killed came at the end of May when the mutilated body of 13-year-old Hamza al-Khateeb was returned to his parents in the southern province of Daraa, where the uprising was triggered in March following the detention and torture of children.

Hamza's body bore signs of brutal torture including lacerations, bruises and burns to his feet, elbows, face and knees, consistent with the use of electric shock devices and of being whipped with cable, both techniques of torture documented by Human Rights Watch as being used in Syrian prisons.

“It is difficult to second guess the motivation for torturing and killing children in custody,” Neil Sammonds, Amnesty International's Syria researcher told GlobalPost. “It may be that the Syrian security forces hope to terrify people off the streets with the threat of what could happen to their children.”

Amnesty has documented 10 cases of children dying in custody since the beginning of the uprising, some of them mutilated either before or after death.

Of the 2,404 male civilians verified as killed since mid-March, the Avaaz report states 159 were tortured to death.

Last month, Amnesty reported documenting the cases of at least 52 Syrians who suffered torture, which caused or contributed to their deaths in custody between April 1 and Aug. 15 this year.

Over the past 10 years prior to the uprising, Amnesty documented 45 cases in Syria of deaths in custody due to torture.

The evidence for protesters being tortured to death in Syrian jails was further corroborated in startling video testimony by the defected Attorney General of Hama, a city that has been a center of rebellion against the Assad regime.

Adnan al-Bakkour said he had been forced to sign off on the burial of 17 people who had died under torture in Hama and that he knew of 320 detainees who had been tortured in custody.

The Avaaz report also documents the deaths of 278 soldiers, all of them male conscripts from regular divisions of the Syrian army, as compared to the professional paid soldiers of the elite Fourth Division, commanded by Assad’s brother Maher.

The Fourth Division has led most of the assaults on the key centers of protest across Syria.

More than 100 of the soldiers died from gunshots to the upper body, three were strangled to death and 94 of the bodies showed marks of severe torture, the report found.

Four army officers were also killed, all of them shot in the head. The finding is consistent with testimony from defected soldiers that those refusing orders have been executed by their superior officers.

Four pro-Assad thugs, known as shabiha, were killed by Syrian civilians in Homs in an ambush while a further three were shot repeatedly before or after death, the report said.

“Casualties of armed violence are not numbers, they are real people who had dreams, sorrows and joys,” said Wissam Tarif, executive director of Insan, speaking at the launch of the Charter.

“They left behind families and friends — many who are angry, many who are sad. Recognizing the casualties of armed violence is recognizing a better future.”