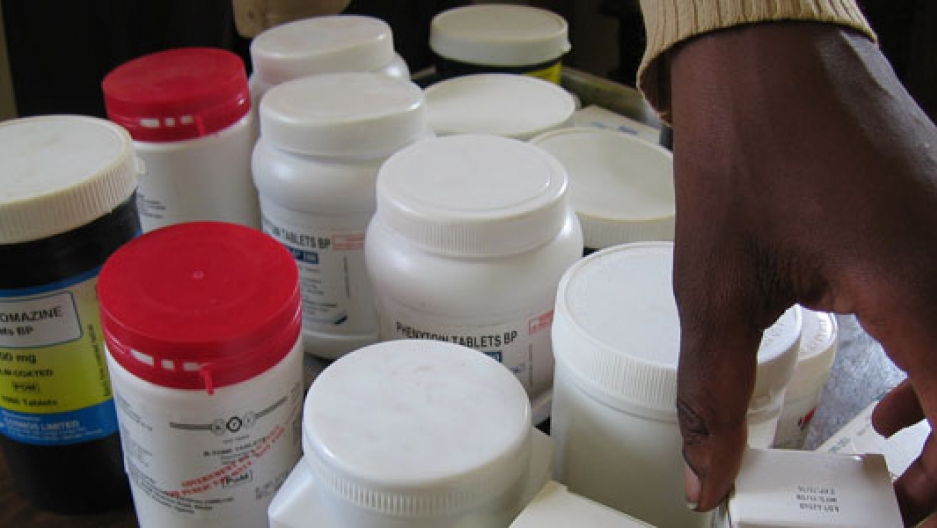 Share
By Joanne Silberner At a small health clinic in western Uganda, it is medication day for psychiatric drugs, an event that happens every month or so. A clerk sits near an unscreened window, counting out pills for the long line of patients. People have walked for miles past small farms and through red clay hills to get here. Beatrice Mudumya, 23, waits quietly. In 2009, she developed an illness she calls "mental head." All she did was sleep. Mudumya says her family prayed, but that didn't help, so they took her to the hospital. Antidepressants got her going again. Now she is back to farming and fetching water and washing clothes, but the antidepressants she is getting come from a charitable organization, and it's their last day at this clinic until more donations come in. Mudumya is about to become like a lot of Ugandans with mental illness — diagnosed but without treatment. Julius Kayiira, director of Mental Health Uganda, knows of many people with mental illnesses who have never been treated. He can even show you photographs of people chained to trees, the chains eating into their flesh. Kayiira's organization provides social support, job training, and care to people with mental illness. He says organizations like his face an enormous funding gap, and he blames that gap, in part, on the United Nations. "It's so hard for us to have any project funded by any international partners because you find they don't have [mental health] in their strategic funding areas," he says. In 2000, the UN set out a strategy for helping impoverished nations in a set of objectives called the Millennium Development Goals. The goals, which have been called the most politically important pact ever made for international development, include eradicating extreme poverty and hunger, and reducing the incidence of infectious diseases such as HIV and malaria. "The Millennium Development Goals have given direction to almost everybody," says Kayiira. Yet the goals say nothing about treating mental illness. "This is a major blow to our efforts," he says. Mental health advocates around the world say the same thing — that the exclusion has held back mental health as a global health issue. "The Millennium Development Goals are one of the most important instruments for global policymaking," says psychiatrist Vikram Patel of the London School of Hygiene and Tropical Medicine. "When something is not part of the MDGs, they simply fall off the net, as it were." The World Health Organization estimates that more than 450 million people suffer from mental disorders, and a new report by the World Economic Forum figures the annual global costs of mental and neurological illnesses at $2.5 trillion. That is three times the economic cost of heart disease. Yet one of the chief architects of the Millennium Development Goals, Columbia University's Jeffrey Sachs, has defended the omission of mental illnesses. Sachs did not make himself available for this story, but he has responded in print to critics like Vikram Patel. "The reason that the MDGs do not explicitly address noncommunicable diseases such as cardiovascular or psychiatric diseases is that the MDGs focus on the gap in health status between rich and poor countries, a gap mainly accounted for by infectious diseases, malnutrition, and unsafe childbirth," wrote Sachs. "The goals were crafted to address these large gaps rather than to solve all pressing health problems." But Patel counters that many people with mental illnesses like depression and schizophrenia cannot provide for themselves and are more prone to other illnesses, poverty, and premature death. Depression alone ranks as the number one cause of disability worldwide, according to one measure used by the World Health Organization. The UN this week is holding a special two-day summit on noncommunicable diseases such as cancer, heart disease, and diabetes. Yet, once again, mental illness is not a focus. Julius Kayiira, director of Mental Health Uganda, remains frustrated. He says greater recognition of mental illnesses by the world body could make a big difference. He knows that because the UN has, at least once, focused attention to mental health. That was in a treaty on the rights of people with disabilities. Kayiira says almost immediately after that treaty was adopted, his group got two new funders. Reporter Joanne Silberner travelled to Uganda as part of a Rosalynn Carter Fellowship for Mental Health Journalism.